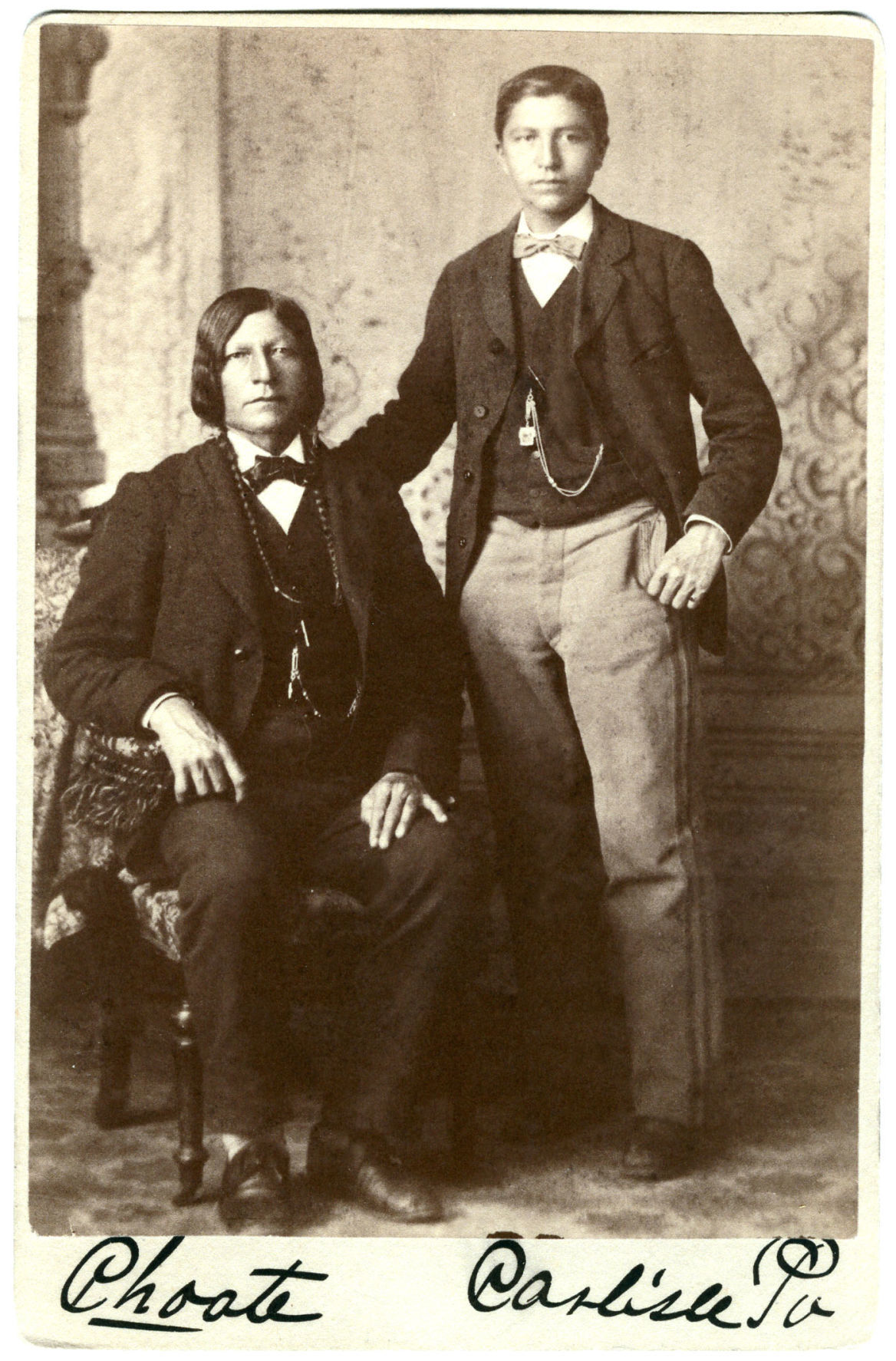 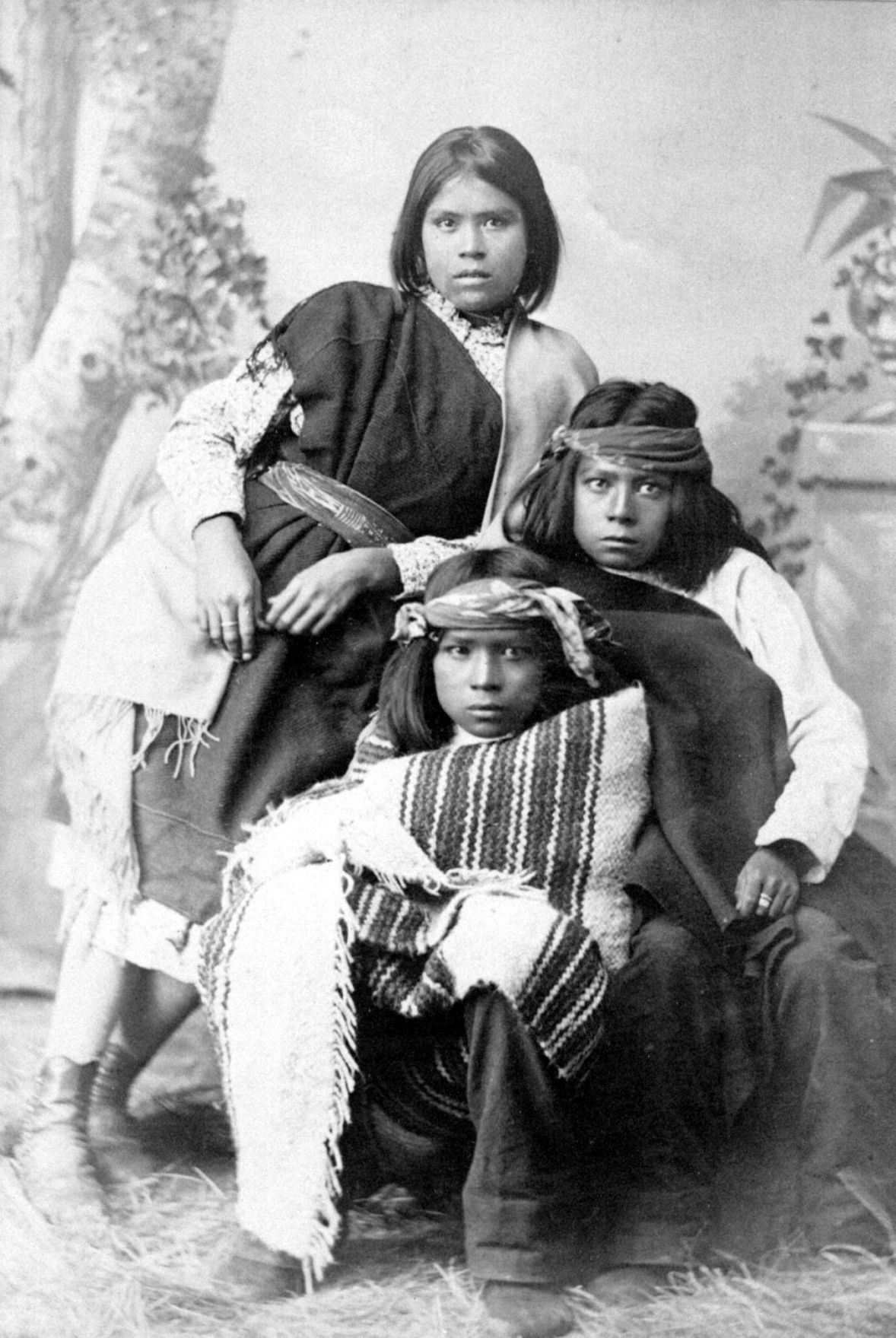 This 1880 photograph shows three Pueblo Indian children from Laguna, New Mexico, in native garb before they are enrolled in a curriculum of assimilation at the Carlisle Indian Industrial School. 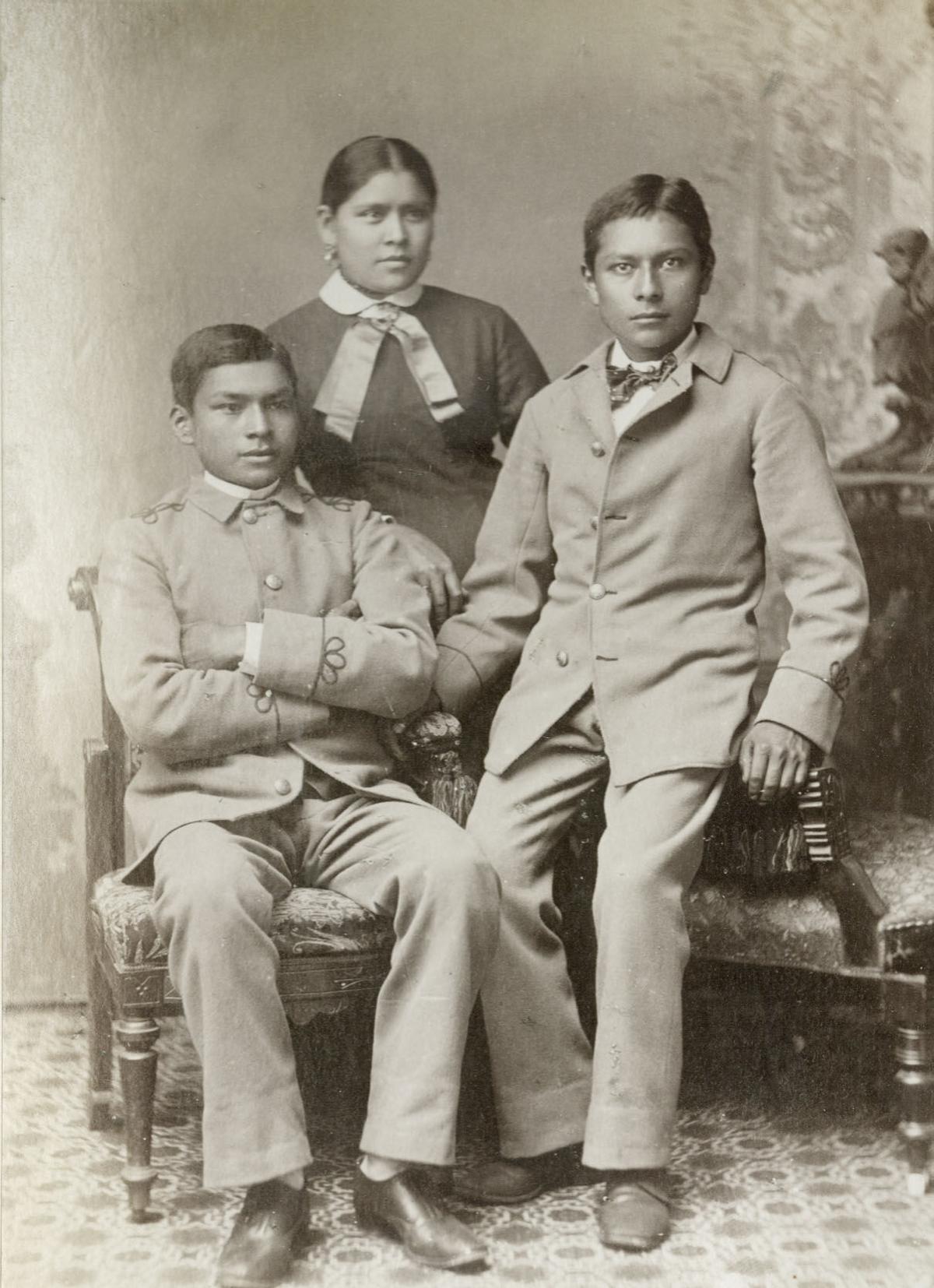 This 1884 photograph shows the same Pueblo Indian children in school uniform after four years of being at the Carlisle Indian Industrial School. The students are John Chaves, Mary Perry and Bennie Thomas.

The teacher said the strange markings on the blackboard were the key to a new identity.

The scribbles were a list of names of white men for Indian boys to pick from.

“None of the names were read or explained to us so of course we did not know the sound or meaning of any of them,” Luther Standing Bear would later write.

“I took the pointer and acted as if I were about to touch an enemy.”

The instructions that day in class were simple. Each boy was handed a stick and had to indicate his choice of a new name.

Once a selection was made, the teacher wrote the word on a piece of tape and erased the letters from the blackboard, narrowing the options for the next child. The piece of tape was later replaced by a label sewn onto the military style uniform.

The first time the teacher called roll, no one answered in his given name, Standing Bear wrote. But then she had each boy stand up and say “present” so that gradually they could associate the sound of the name with the identity of each student.

In many ways, subtle and profound, the students of the Carlisle Indian Industrial School were being transformed by the mission to assimilate native youths to the white man’s world and to teach each child a marketable trade.

It was within that change that trauma took place and continues to this day. The earliest students especially had suffered enough before they had even set foot on campus. The frontier wars and the westward expansion had taken a toll on the hundreds of separate and distinctive cultures the white man had lumped together as “Indians.”

“They had already been displaced,” said Barb Landis, Indian school archives and library specialist for the Cumberland County Historical Society. “Their homes had been destroyed. Their land had been taken.”

By 1879, the year the Carlisle school opened, remnants of tribes that endured for generations were confined to reservations and often mingled with traditional enemies in a bid by the federal government to erode the ties that bound native people to ancestral territory, Landis said.

A veteran soldier, Richard Henry Pratt believed the best way to civilize the Indian was to remove children from tribal influences and put them among the white man. He was convinced that without the knowledge of English, the Indian was left helpless in any interaction requiring communication with the white man.

Not only were Carlisle students punished for speaking their native language, they were prohibited by the faculty and administration from interacting with other members of their tribe. This added to the trauma because it isolated them from the comfort that can be had from a common language and background, Landis said.

Each child was taken far away from home and introduced to a strict, military-based way of life, said John Bloom, a history professor at Shippensburg University. He and others interviewed compared what happened at Carlisle to the current immigrant policy of separating children from families along the southern border.

Both cases involved minority populations that were looked upon as outsiders by policymakers and mainstream society, Bloom said. In both cases, separating the children from the adults was used as a means to control the population, he said.

In the case of Carlisle and other boarding schools, the control took the form of assimilation with the goal of letting the home community wither away, Bloom said. The current policy is basically a form of intimidation used as an incentive to keep illegal immigrants out.

“It’s something we have to be mindful of,” Bloom said. “There is a lot of long-term damage that is done when you separate families. The damage of that policy is still being felt by people today.”

Upon arrival at Carlisle, Indian children were subjected to a series of steps meant to remove all signs of tribal influence. Their braids of hair were cut. Native clothes were replaced by uniforms for boys and dresses for girls. Their time was organized into a regimented schedule where half the day was spent in classes and the other half vocational training. The students were expected to march in formation to the dining hall for meals.

To Lakota children, having their hair cut was a form of mourning, Landis said. “The symbolism of that was fairly profound. It was a sign that someone had died. Something did die. Their culture was being eradicated.”

For some native cultures, the burning of certain woods and plants were key components to rituals meant to provide comfort and protection. But the act of burning was frowned upon at Carlisle.

Alaskan children used to a diet based on fishing and whaling were removed from such familiar surroundings and sent to a climate that made them vulnerable to illness and foods that were a shock to their systems, Landis said. “This was the foundation of the disconnection these kids were dealing with every day. There was no escape from it.”

Landis said much of the thinking behind the philosophy of the school was derived from Christianity, which can be very authoritative and autocratic. That kind of thinking goes back to Adam and Eve being caught by God in the Garden of Eden, Landis said.

“They were made to be ashamed of who they were,” she said. “God gave them [Adam and Eve] dominion over animals to the point where they named the animals. If you name something, you have control over it. When you come to a school with a name and someone changes it, they had a kind of agency over you.”

A lot of Native American names are tied to something specific about the person, Landis said. “The names are very fluid and they change.” By giving each child a name tied to western culture, they lose something of that distinction.

“There was no understanding of native people back then,” said Mary Ann Robins, an Onondaga/Seneca Indian and Carlisle Indian School descendant. “We were kind of an eyesore to get rid of.”

Robins compared the Indian problem in westward expansion to the symptoms of poison ivy. Native Americans were an itch the white man could not satisfy, she said. Forced assimilation was one way to address the issue.

When you remove anyone from the nurture of home and family, you erode the person from the inside and create a cancer that carries over from one generation to the next, Robins said. In Native Americans, this has taken the form of diminished self-worth and a higher incidence of alcoholism.

She said students returning from Carlisle and other boarding schools had a feeling of disconnection after years of physical and emotional separation immersed in a culture far different from the tribe.

This resulted in bitterness and mixed emotions. “There was a hole in the heart where there was something always leaking out,” Robins said.

“There were several schools based on the Carlisle model,” said Sandi Cianciulli, an Oglala Sioux and Carlisle Indian School descendant. “They used to call Carlisle the flagship school. It was spreading across the country.

“The bad thing has been the impact on Indian families,” she said. “There have been studies made on the impact of boarding school experiences on Indian parenting. In some cases, it has been devastating.” Cianciulli cited in particular a suicide rate among Native American youths higher than the national average.

Christine Diindiisi McCleave is executive officer of the National Native American Boarding School Healing Coalition. “Our mission is to basically understand and address the ongoing trauma caused by the American policy,” she said.

The forced assimilation of Native American youths by institutions lacking emotional support and empathy has caused a form of inter-generational trauma that has contributed to higher rates of heart disease, obesity and diabetes, McCleave said. She said studies prove the mental and physical trauma of past generations can be passed down as an imprint on the DNA.

What happened at Carlisle and other boarding schools has been defined as a form of genocide by the United Nations, according to McCleave, a Carlisle Indian School descendant and member of the Turtle Mountain Ojibwe tribe. “It is removing children from a group based on race and culture.”

She said elements of the Carlisle school were carried over to aboriginal boarding schools in other countries including Canada. In that nation, hearings were held and public testimony taken on abuses within the schools that caused trauma. There were also calls to action that led to the reconciliation of past deeds with the descendants of students.

“The U.S. has not even acknowledged that this [forced assimilation] was even a policy,” McCleave said.

This 1880 photograph shows three Pueblo Indian children from Laguna, New Mexico, in native garb before they are enrolled in a curriculum of assimilation at the Carlisle Indian Industrial School.

This 1884 photograph shows the same Pueblo Indian children in school uniform after four years of being at the Carlisle Indian Industrial School. The students are John Chaves, Mary Perry and Bennie Thomas.