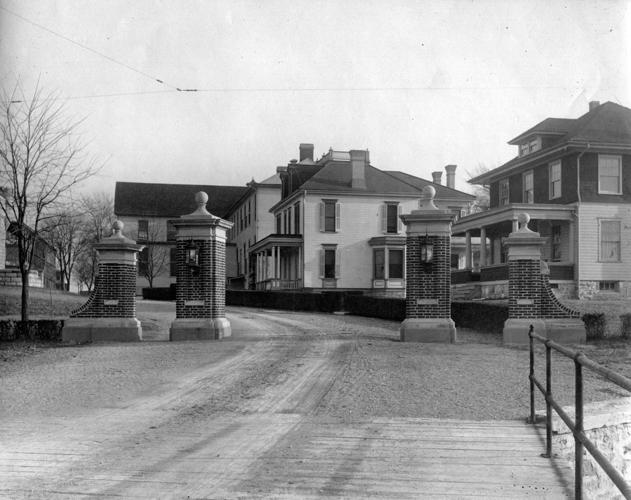 This photograph from circa 1908 shows the entrance to the Carlisle Indian Industrial School. The home of legendary football coach Glenn “Pop” Warner is the first structure on the right. 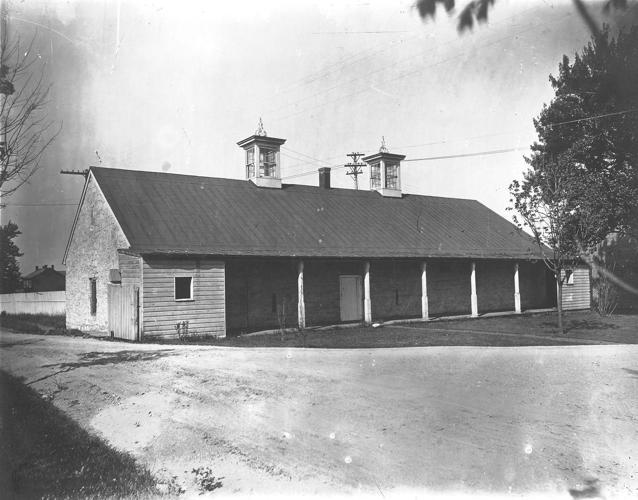 The Hessian Powder Magazine is the oldest building on the campus of Carlisle Barracks and is the only remnant of what was once a sprawling Revolutionary War logistics base called Washingtonburg.

Standing in the graveyard, the woman struggled with mixed emotions.

“It made her sad that the children had been taken so far away from their homes,” Robins said. “But she was also crying with the feeling of release and happiness. There were people taking care of the graves. They were not overgrown and cluttered with trash.”

It was the Saturday of Memorial Day weekend 2018, three months shy of the 100th anniversary of the closing of the Carlisle Indian Industrial School.

A Carlisle descendant, Robins was in attendance at the 45th annual remembrance ceremony to honor the students buried on post. She is president of the Circle Legacy Center, a local Indian advocacy group.

Every year, flowers are placed at each tombstone and here and there are small tokens of affection for those Indian youths who did not survive the social experiment in forced assimilation.

A prayer circle begins each ceremony and a Native American song brings the tribute to a close. There is a potluck picnic to build fellowship among those who attend.

Robins could see how the woman was taking it all in, trying to resolve the same conflicting emotions felt by many Native Americans at just setting foot on Carlisle Barracks.

“It’s very hard to comprehend being young and swept away and just placed here,” Robins said. “My mind goes back to what they must have felt, the fear, the anxiety. The wound is healing for me because I go there. The best part in healing the wound is repairing the misconceptions and the misunderstandings in others.”

Christine McCleave can relate. Some years ago, she visited Carlisle Barracks and took a tour of what remains of the Indian school campus. It angered her that the home of Richard Henry Pratt was memorialized. As the founder of the school, it was Pratt who pushed the concept of assimilating native youths to the white man’s culture.

“The whole place, it felt heavy, very sad,” said McCleave, a Carlisle descendant and the executive officer of the National Native American Boarding School Healing Coalition. One mission of her organization is to understand and address the ongoing trauma caused by Carlisle and schools modeled after its example.

Some healing is underway. For the past two years, the Army Corps of Engineers, in cooperation with the Carlisle Barracks garrison and Native American tribes, has been exhuming the remains of students buried in the cemetery next to the Claremont Road gate to the Army post. So far, the remains of five students have been returned to relatives for burial on tribal lands. It is likely other families may make similar requests to have their loved ones repatriated.

“It’s making right some of the wrongs,” McCleave said. “Those children should never have been taken from their homes.” When Carlisle was operating as a school, there were cases where the federal government withheld rations as leverage, she said. Many Indians on reservations faced poor living conditions.

In 2017, McCleave attended a roundtable with representatives from the 59 tribes that have children buried in the Carlisle Barracks Post Cemetery. The goal was to brief them on the process of making a request to the Army.

The Army has been working diligently with tribal leaders in coordinating the exhumation of remains in a way that is respectful of native traditions, Robins said. She said the Army put in a lot of effort to guard the privacy of family members and to prevent a media blitz.

There are many Indians who still feel animosity toward Carlisle Barracks and what it represents in history, Robins said. “We can’t hold those that are there now for what happened.”

Greater interest There was a time when people were not comfortable talking about the subject, said Barb Landis, Carlisle Indian School archives and library specialist with the Cumberland County Historical Society. “We have been seeing more interest and activity in the last few years. The younger generations are more apt to explore what their ancestors’ experiences were.”

At least two to three times a month, a descendant comes into the CCHS building at 21 N. Pitt St. looking for information on an Indian school student, said Landis who also leads people on tours of the remaining campus buildings on post.

“There are maybe a couple dozen structures that are part of the National Register of Historic Places,” Landis said. The buildings include the Thorpe Hall gymnasium, the old art studio and the former home of Glenn “Pop” Warner, the legendary football coach.

The heightened interest in the history of the school is due in part to greater access to information made possible by the internet, Landis said. “Dickinson College has opened up a huge box of primary source material that was accessible before but you had to jump through a lot of hoops.”

Since 2013, the college has dispatched 11 teams of researchers to review and scan Carlisle Indian School records kept at the National Archives in Washington, D.C., college archivist Jim Gerencser said.

The teams have captured about 275,000 pages of material including the contents of quarterly reports, admission ledgers, official correspondence, financial ledgers, campus publications, 6,150 student files and about 16,000 index cards. The bulk of this information has been processed into a searchable online database called the Carlisle Indian School Digital Resource Center.

“There is information about the Carlisle Indian School scattered around lots of different archives and historical societies across the country,” Gerencser said. “The idea was we can bring all that together in one place and make it much easier to do research on the Indian school or just look for information on a family member.

“We always felt the records of the school itself, the ones preserved at the National Archives, were an essential piece to any kind of project,” he said. Early on, the priority went to scanning the student index cards and the paperwork within each student file.

The search for school records has since expanded to letters and reports sent by Pratt and the other school superintendents to the commissioner of the Bureau of Indian Affairs, the oversight agency for Carlisle and other boarding schools.

Due to a lack of detail in the indexing of some material, some of the records uncovered have probably never been seen before by Carlisle Indian School researchers, Gerencser said. He compared the process to digging through an unexplored gold mine.

“It will never be done,” he said. “There will always be more information.” Aside from its facility in Washington, the National Archives has other branches in major cities that could have Indian school records.

Who tells the story?

So far, the overwhelming perspective has been that of officials who ran the Carlisle Indian School or were responsible for the implementation of the policy of assimilating native children, Gerencser said. Dickinson College is developing a function on its website where Indian school descendants could upload images, documents and family stories related to the students, he said.

Some Carlisle descendants have asked the college to post disclaimers and implement protocols that limit access to sensitive records to relatives only. They are advocates pressing for Indigenous Data Sovereignty.

Louellyn White is an associate professor of First Peoples Studies at Concordia University in Montreal, Quebec. Her paternal grandfather and great-uncle were both Carlisle Indian School students.

White recently wrote an article for the Journal of American Indian Education titled “Who Gets to Tell the Stories.” The article explores ways Native Americans can claim the narrative and data on the tribes, which, for much of U.S. history, has been controlled by non-natives.

Carlisle Indian School was the first federally funded off-reservation boarding school in the country. While some may argue the school records should be open and made public, White believes the college and similar agencies need to exercise sensitivity and obtain input on what to release from an advisory council of Native Americans.

While non-natives may see the records of the Carlisle school as a collection of letters, spreadsheets, ledger entries and data, Native Americans see the information as the only connection they may have to a long-lost relative, White said.

“We have been in consultation with them to make sure they have input from tribal nations so they are not putting out sensitive information,” McCleave said of Dickinson College. “People in academia view this information differently from those of us who are native.”

Because advocates see the data through the lens of generational trauma, they believe any access should be handled with care and consideration to the tribes and the descendants.

In May, the Department of the Army scheduled June 15 as the start date to disinter the remains of six Carlisle Indian School students who died…

Tour Through Time: Geronimo visited Carlisle on his way to Washington D.C. in March 1905

Famed Apache chief Geronimo visited the Carlisle Indian School on his way to the inauguration of Teddy Roosevelt.

David Maraniss will be appear a book discussion and signing event from 4 to 6 p.m. Tuesday at the Bosler Memorial Library, 159 W. High St., in…

Learn more about the secret language chimps use to communicate

This photograph from circa 1908 shows the entrance to the Carlisle Indian Industrial School. The home of legendary football coach Glenn “Pop” Warner is the first structure on the right.

The Hessian Powder Magazine is the oldest building on the campus of Carlisle Barracks and is the only remnant of what was once a sprawling Revolutionary War logistics base called Washingtonburg.