Indian school descendants prefer the focus be on resilience, not the trauma
0 Comments
Share this
{{featured_button_text}}
1 of 2 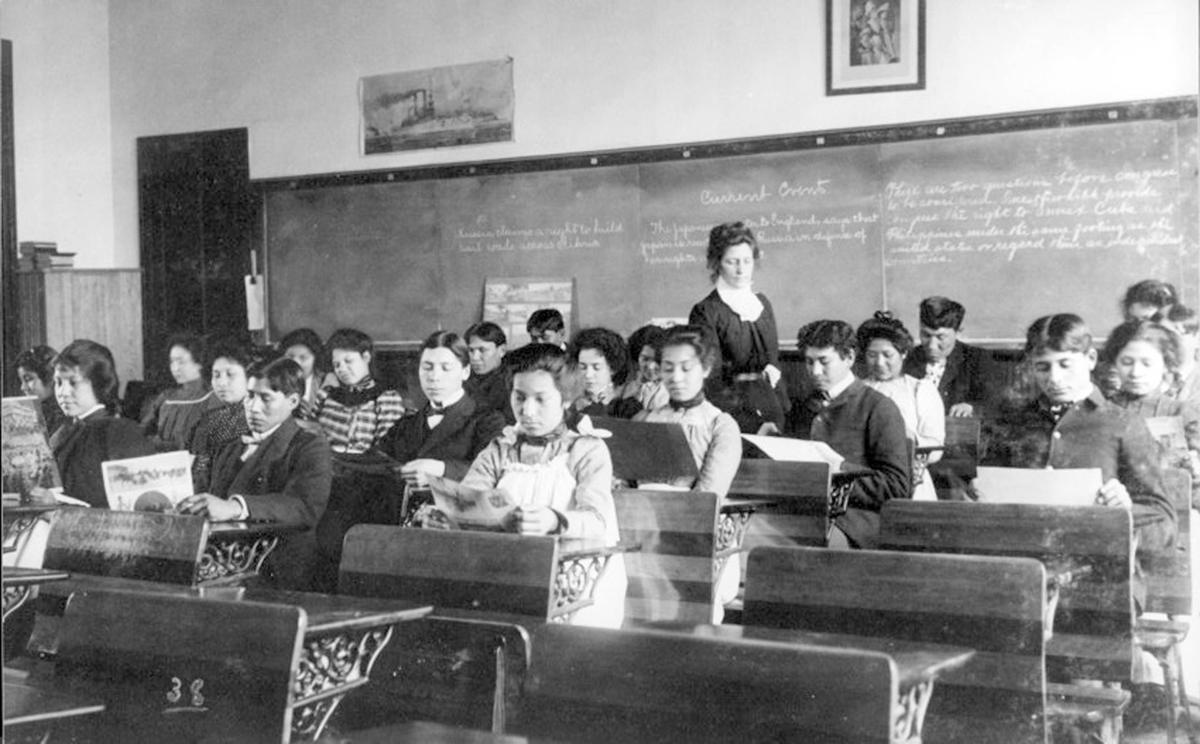 In later years, older students enrolled in the Carlisle Indian Industrial School were more equipped to resist efforts at assimilation and hold onto their cultural identity. This photo shows students in an eighth-grade history class studying current events. 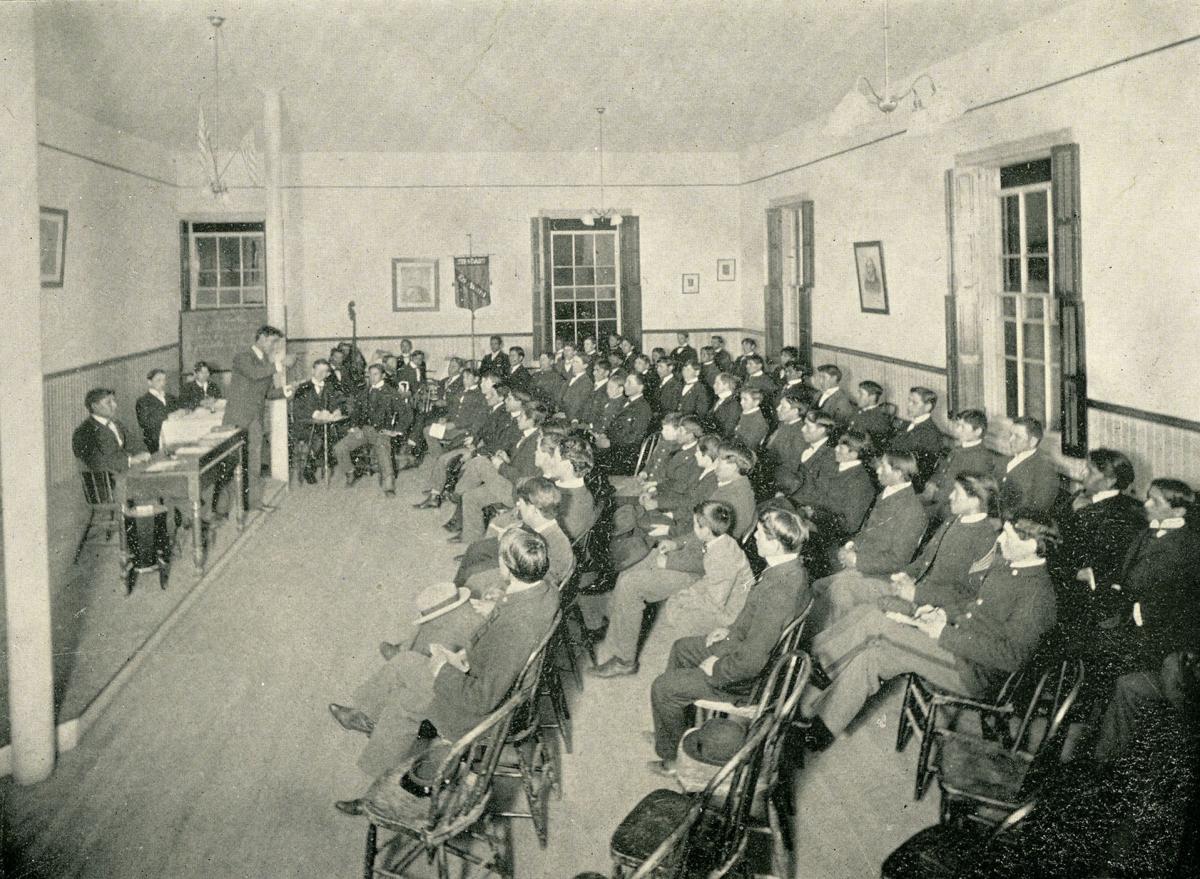 Participation in debating societies on the campus of the Carlisle Indian Industrial School gave students skills they later used to advocate for Native American rights. Here is an 1898 photograph of male students participating in a debating society meeting.

It was an impression pounded into Louellyn White from an early age.

The Carlisle Indian Industrial School was a good place. It was where her grandfather Mitchell White got an education.

Over and over, time and time again, her father Louis White stressed that point-of-view.

A child of the Great Depression who served in World War II, Louis had to sacrifice something of his future to help support a large family of siblings in the midst of poverty.

Never once did Louis forget where he came from. He always remembered how Mitchell learned lessons from Carlisle to carry on through life.

“He was influenced by Carlisle,” Louellyn said. “He told me ‘Your grandpa got an education. Now you need to get an education to make something of yourself.’”

She went on to obtain a doctorate degree in American Indian Studies and is today an associate professor of First Peoples Studies at Concordia University in Montreal, Quebec.

Let the stories come out

In her work as a student, White delved deeper only to uncover the ugly side of Carlisle, the first off-reservation boarding school in the U.S. But she also learned how to temper criticism with the wisdom of balance.

“I don’t like a duality,” White said of the school. “It’s unproductive. It’s not helpful for anybody. We shouldn’t even try to determine if Carlisle was mostly negative or mostly positive. We need to allow all the stories to come forward, no matter where they are on the spectrum.”

Her hope is once the stories are out, a better understanding could emerge on the range of student experiences and the impact the Carlisle school had on generations of Native Americans.

The Carlisle Indian School was only part of a long history of complex interactions that defy the simplicity of purely right or wrong. While it is clear to most the forced assimilation of native children robbed them of their identities, descendants like White believe too much emphasis has been put on the trauma and not enough on the triumphs.

“We are strong. We are resilient. We are still here,” said Christine McCleave, executive officer of the National Native American Boarding School Healing Coalition.

While schools like Carlisle had a negative impact, many tribes still exist along with their culture, said Sandi Cianciulli, a leader in a project to develop a legacy center in Cumberland County on the Carlisle Indian School. “Some tribes have severe challenges, but a lot of them are thriving. They have their own businesses. A lot of them have industrialized.”

Even when Carlisle was operational, there were students who defied the odds and maintained much of their tribal identity, said John Bloom, a history professor at Shippensburg University. He said sports for them became a coping mechanism where they could express pride as Indians taking on white athletes on an even playing field.

The pressure to learn English to blend with the dominant culture actually made it easier for Carlisle and boarding school alumni to band together and work the system to advocate for Native American rights, said Barb Landis, Carlisle Indian School archives and library specialist for the Cumberland County Historical Society.

Where before Carlisle students were jumbled together with strangers who spoke different languages, the insistence on them learning English gave them a common platform to pursue advocacy. Many Carlisle students learned the act of public speaking and the ropes of social interaction through participation in campus debating societies and the YMCA.

“They learned how to play the game and develop agency within themselves,” Landis said. “They figured out how to negotiate the system.” She said it was Carlisle school alumni and former faculty members who founded the Society of the American Indian, the first pantribal advocacy group and the precursor to the present-day National Congress of American Indians.

There was, of course, a downside to a Carlisle Indian School education. Dickinson College has developed a website that makes school records stored at the National Archives in Washington, D.C., accessible to the public. Those records include letters alumni addressed to school founder Richard Henry Pratt that were then forwarded to the commissioner of the Indian Bureau, a branch of the U.S. Department of the Interior. The letters were an outgrowth of an 1890 student survey questionnaire.

“You start to see in those letters aspects of how the promise of an Indian education was not being met,” said Jim Gerencser, Dickinson College archivist. The letters showed that while many Carlisle students were taught farming and received allotments of land, no provisions were made for them to acquire tools, teams of horses, wagons and investment capital to cover start-up costs.

“I’m not looking for a handout here but I do need to borrow money,” Gerencser said. “This is the theme you see in a number of those letters.”

One mission of Carlisle and other boarding schools was to diminish the value of Indian culture to convince children and young adults to embrace the white man’s culture. This way of thinking had its most traumatic effect on the earliest students.

As time went on, Carlisle enrolled older students who already knew English or had experience with some other boarding school. Many of them had parents or grandparents who were alumni. This background insulated them from some of the harmful effects of assimilation.

“They already had their own sense of value,” Cianciulli said. “They could differentiate. They could compartmentalize.” And yet there were plenty of Carlisle students who believed their culture had no value and it was better to imitate the white man. This made it a challenge for early advocates to gain traction.

Earlier students like Luther Standing Bear were able to equate their boarding school experience to something in the culture of their tribe. A Lakota, Standing Bear saw his time at Carlisle as similar to the rite of passage from boyhood to manhood.

“He was going to be brave,” Landis said. “He was going to go through it and come back to the tribe. The thinking was if you gain the perspective of the white man, you could understand how to empower your community.”

In the decades since Carlisle closed, the federal government has turned over jurisdiction of boarding schools to the tribes, which have sought to promote the teaching of native languages, cultures and traditions, McCleave said. She said the focus has been on healing the past wrongs of the system and putting the emphasis on the resiliency of the tribes and their people.

“With our organization, we have programs focused on education,” McCleave said. For more information on the coalition, visit its website at boardingschoolhealing.org.

“We speak Engish,” she said. “We mastered the language. We are lawyers, doctors and political leaders in the community.”

McCleave cited the story of Jim Thorpe and how the Carlisle Indian School football squad under Coach “Pop” Warner perfected significant changes to the sport that carry on to present-day.

Ten yards for a first down, a neutral zone along the scrimmage line, the passing play and single-wing offense all had their start in Carlisle.

In later years, older students enrolled in the Carlisle Indian Industrial School were more equipped to resist efforts at assimilation and hold onto their cultural identity. This photo shows students in an eighth-grade history class studying current events.

Participation in debating societies on the campus of the Carlisle Indian Industrial School gave students skills they later used to advocate for Native American rights. Here is an 1898 photograph of male students participating in a debating society meeting.