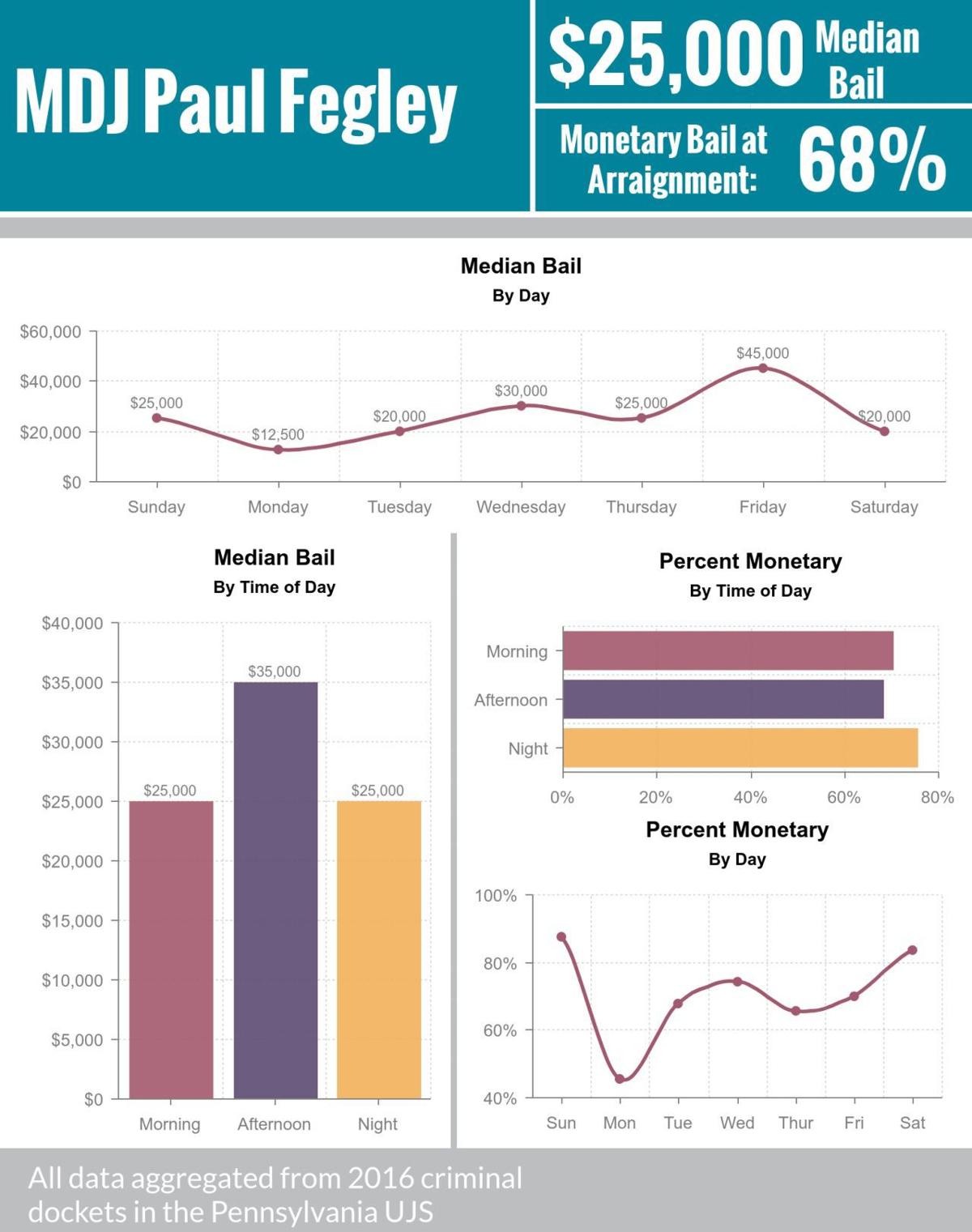 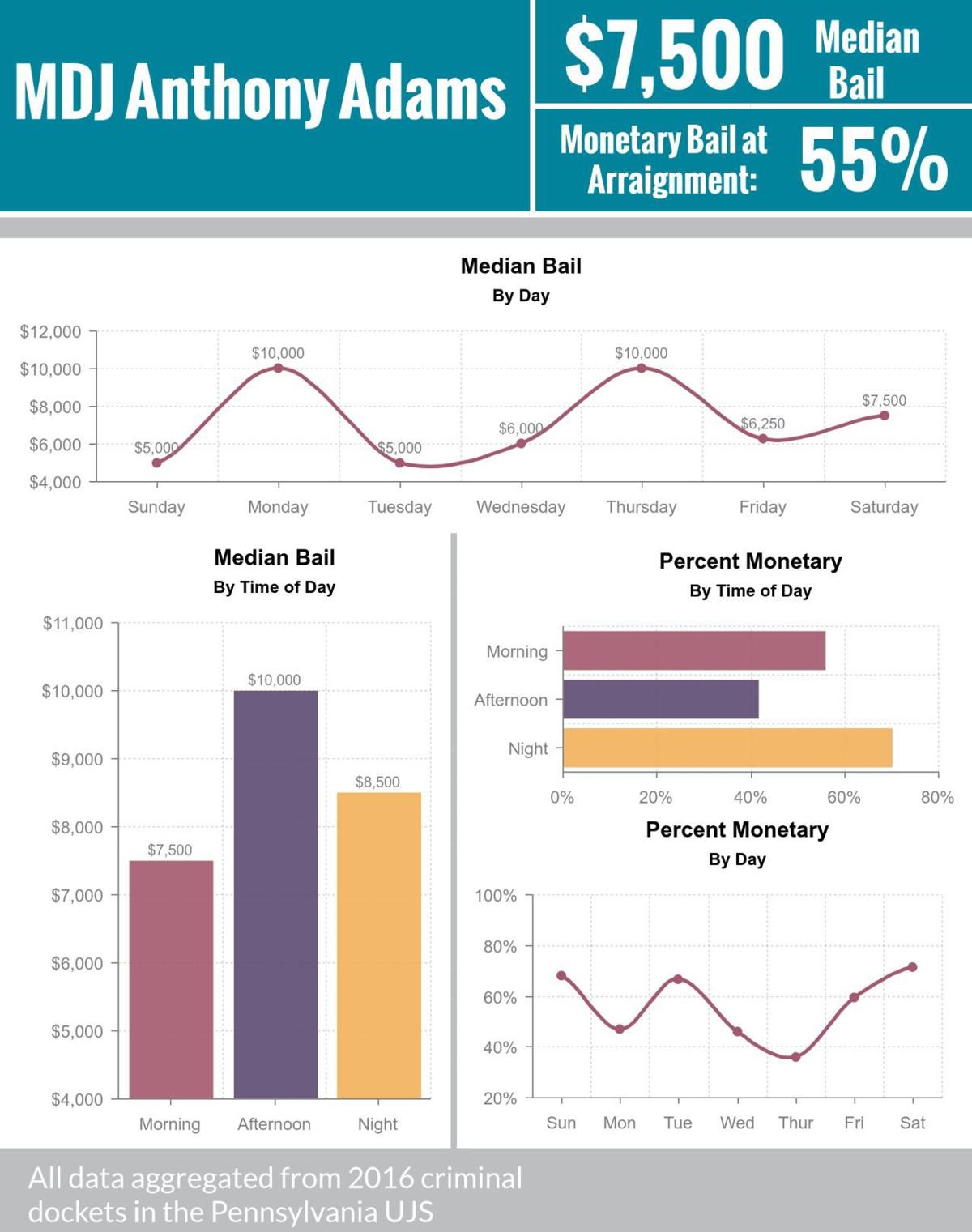 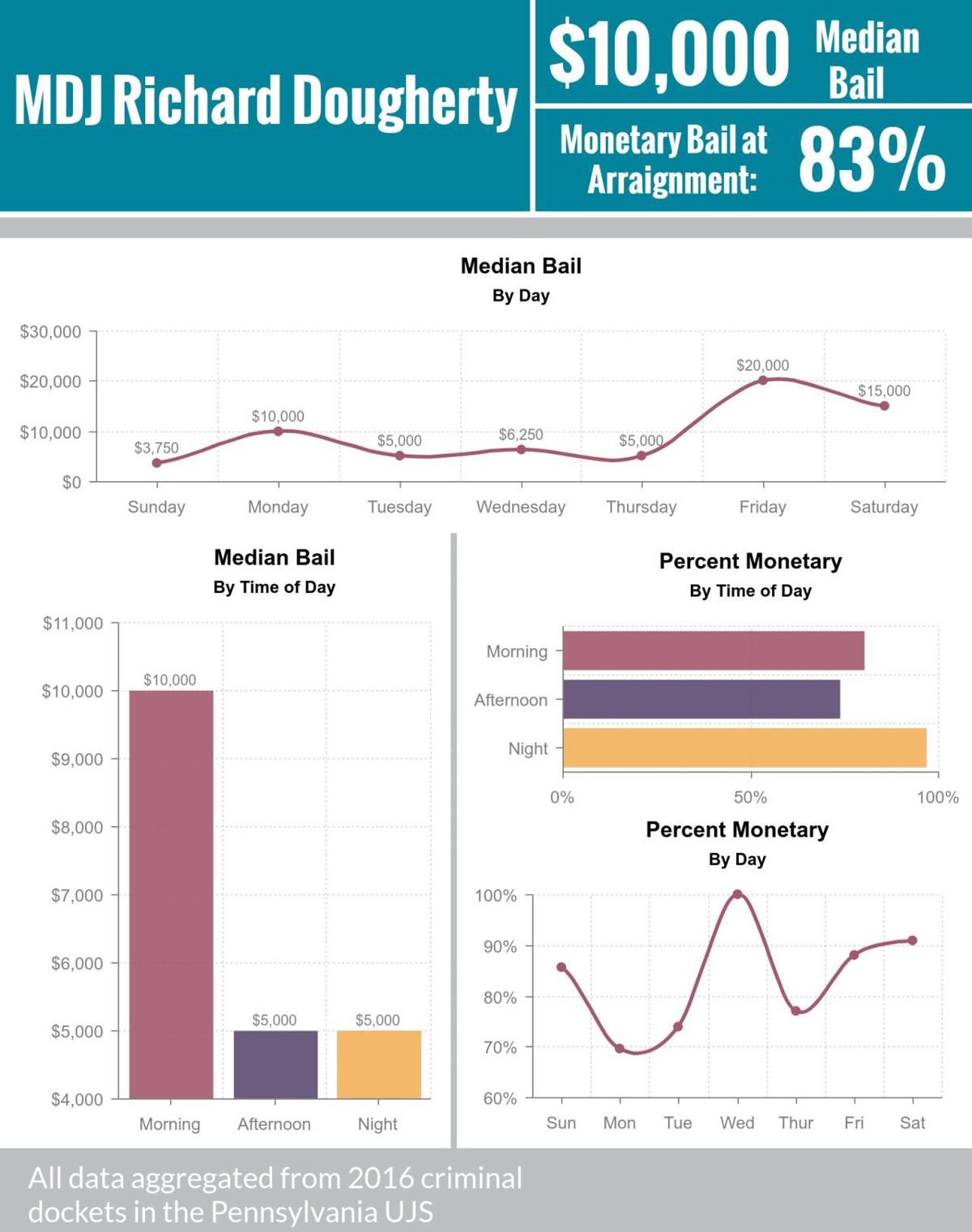 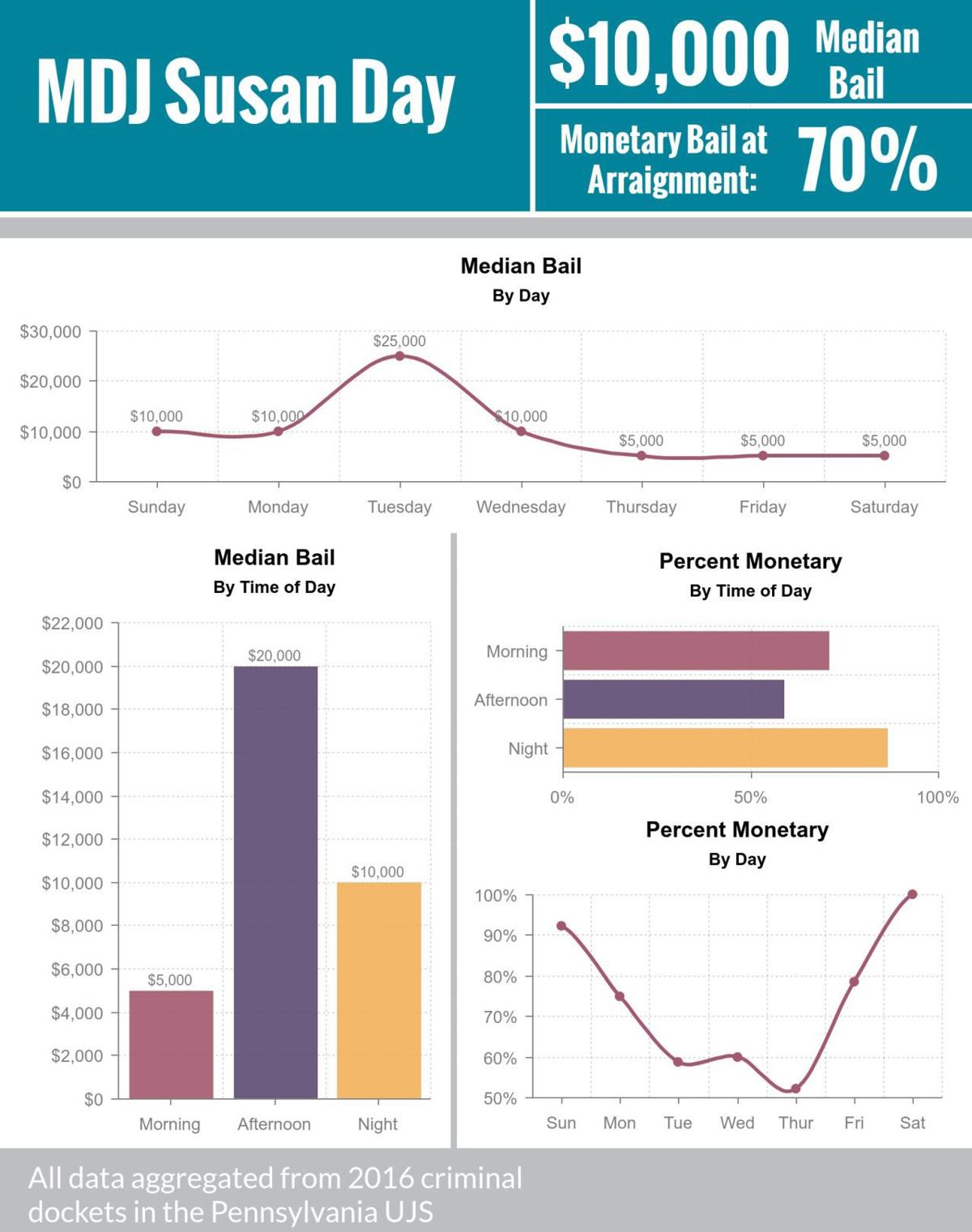 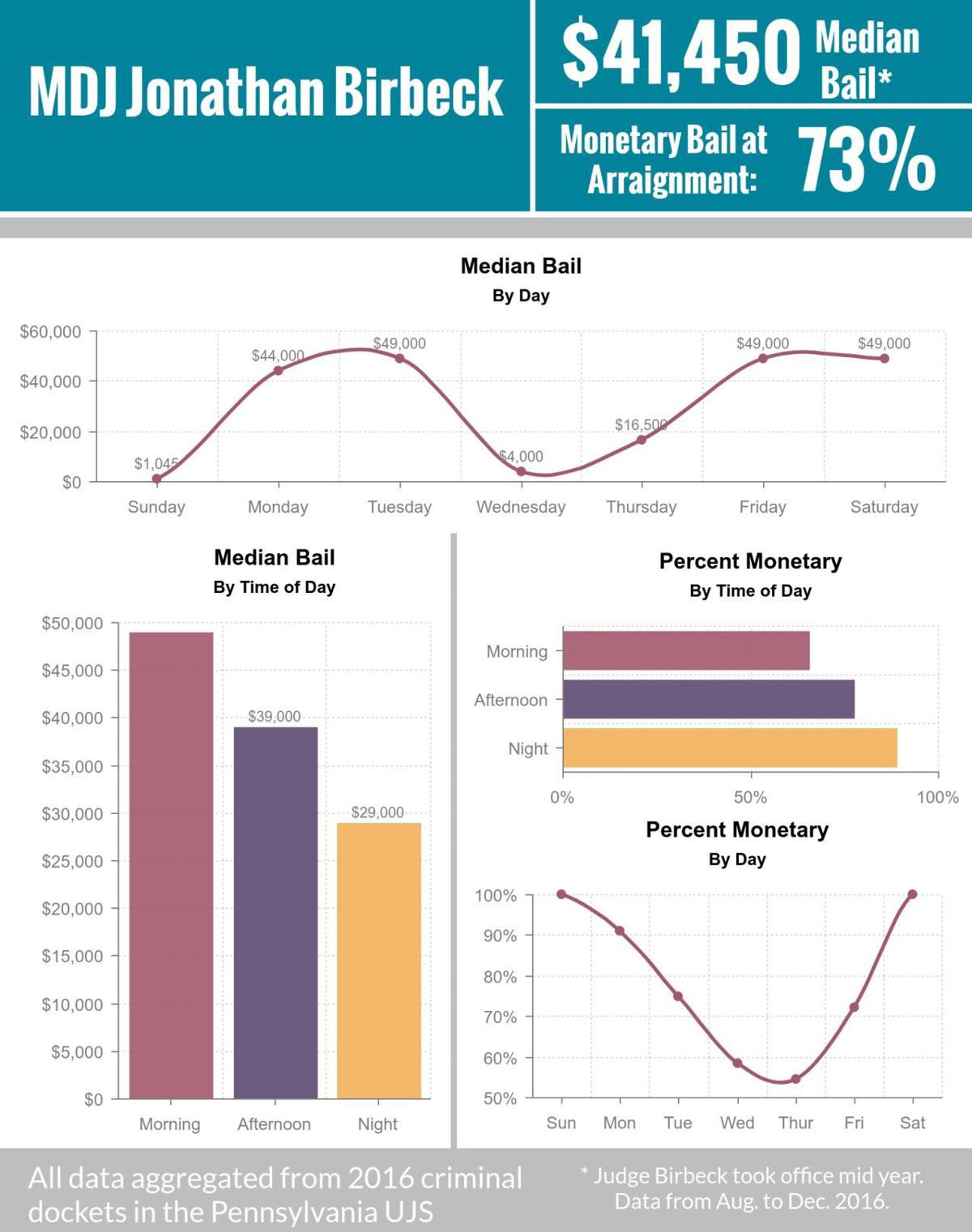 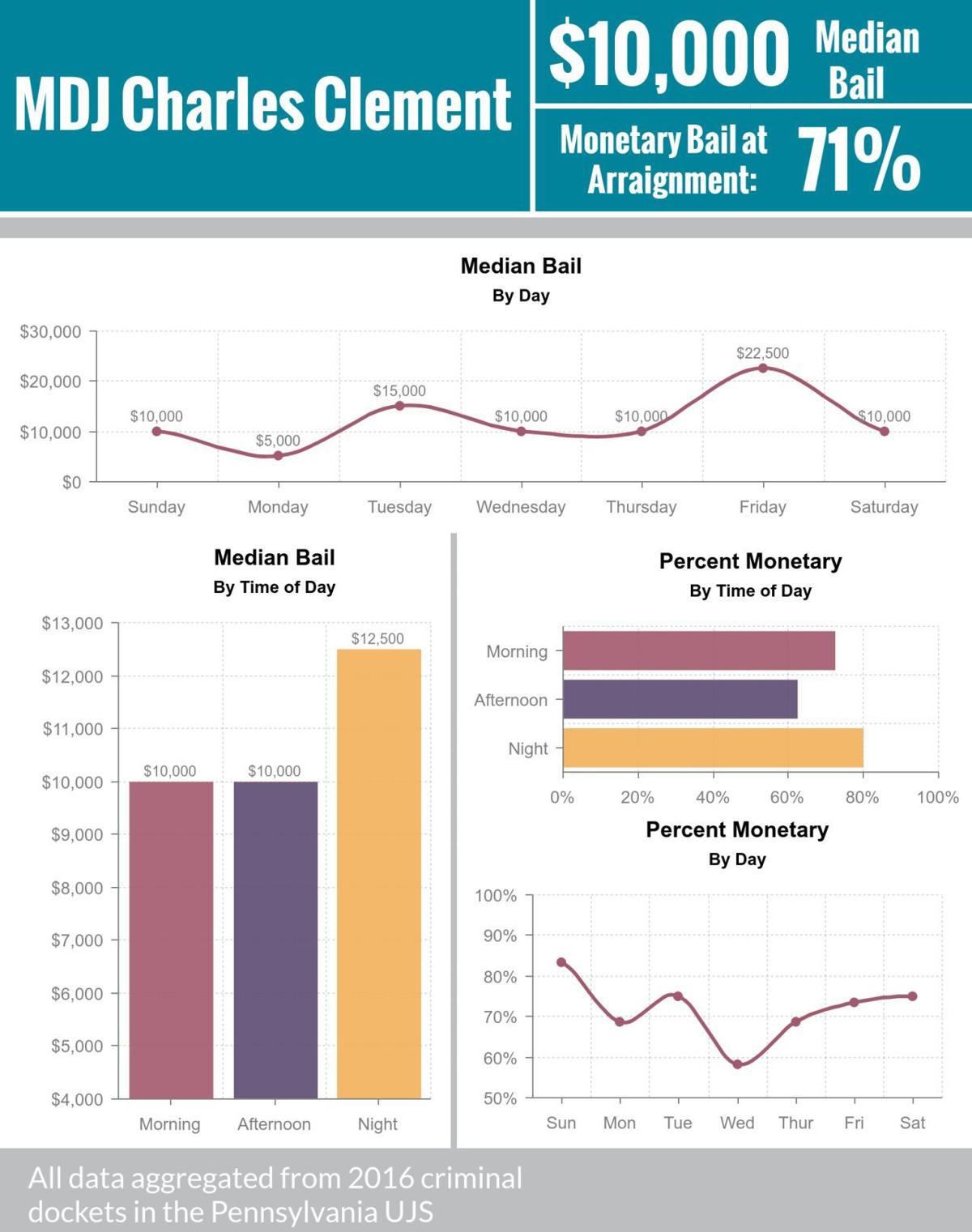 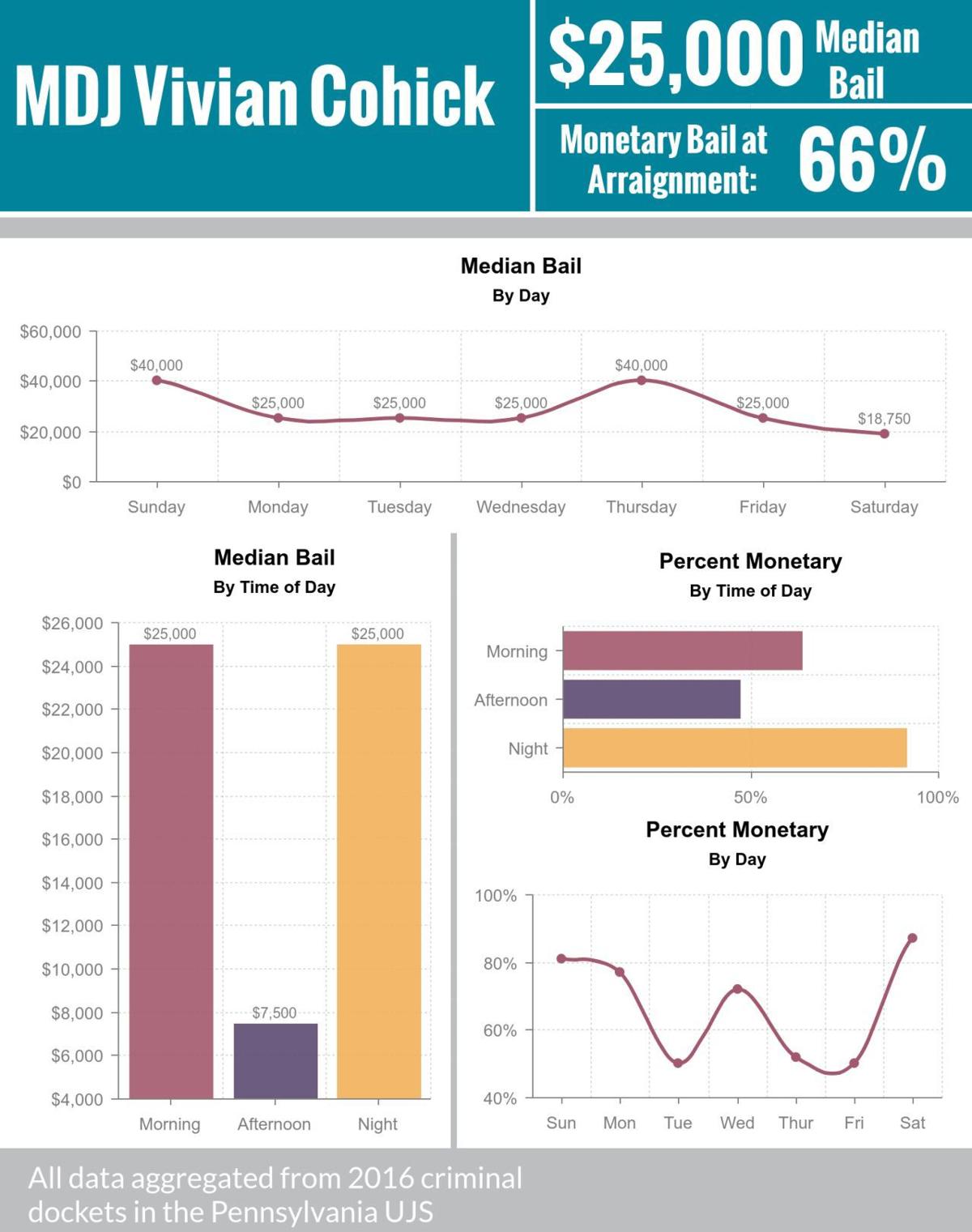 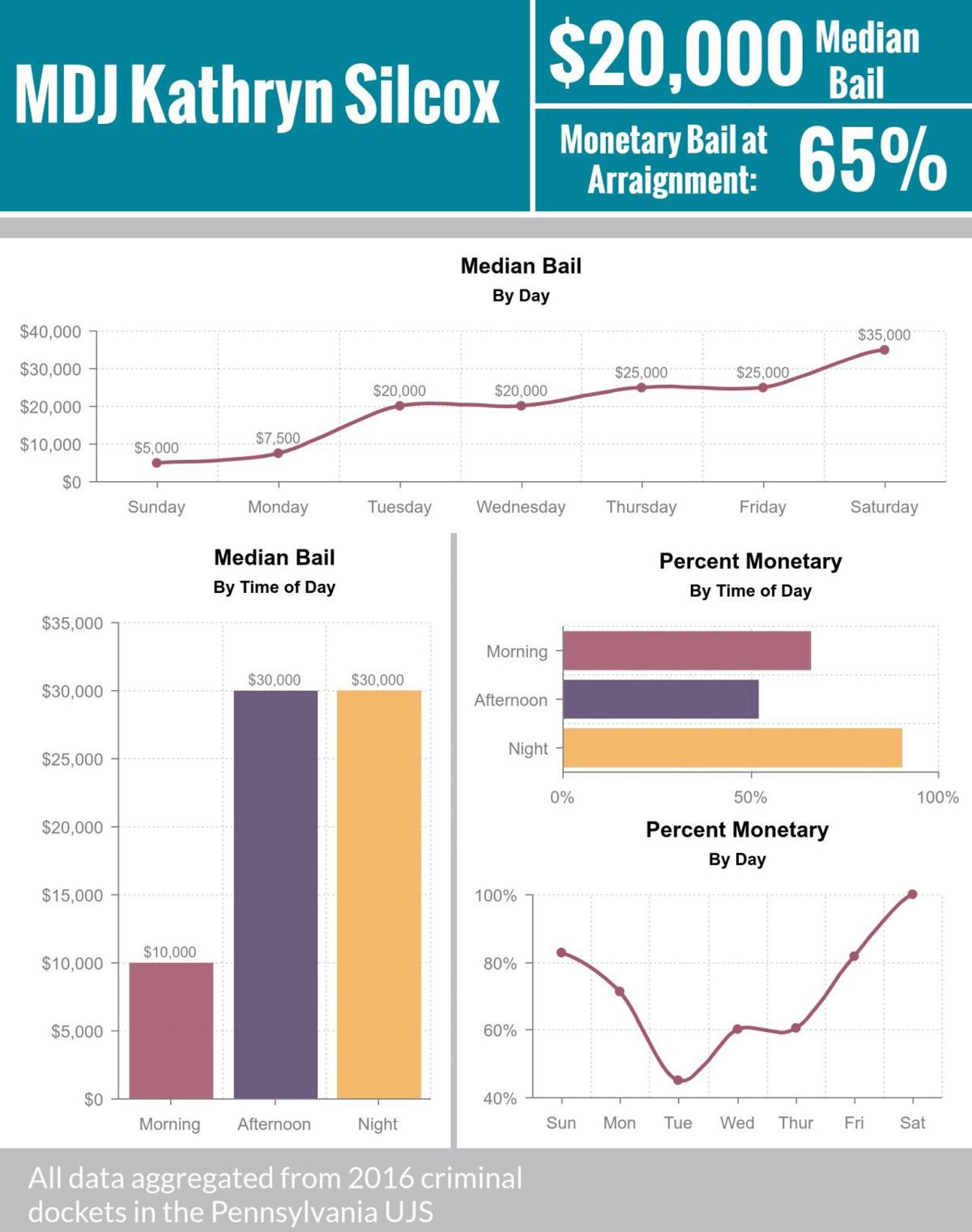 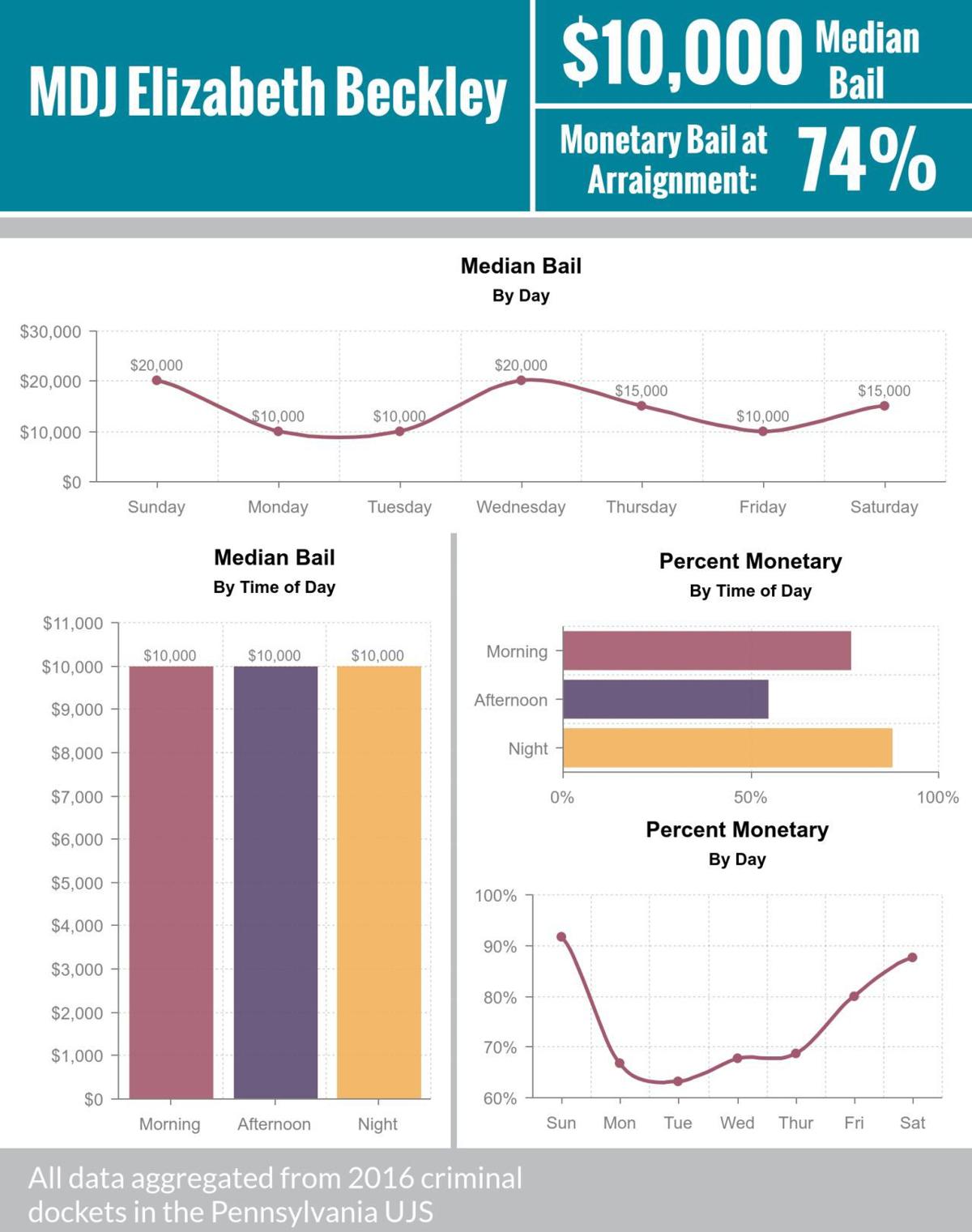 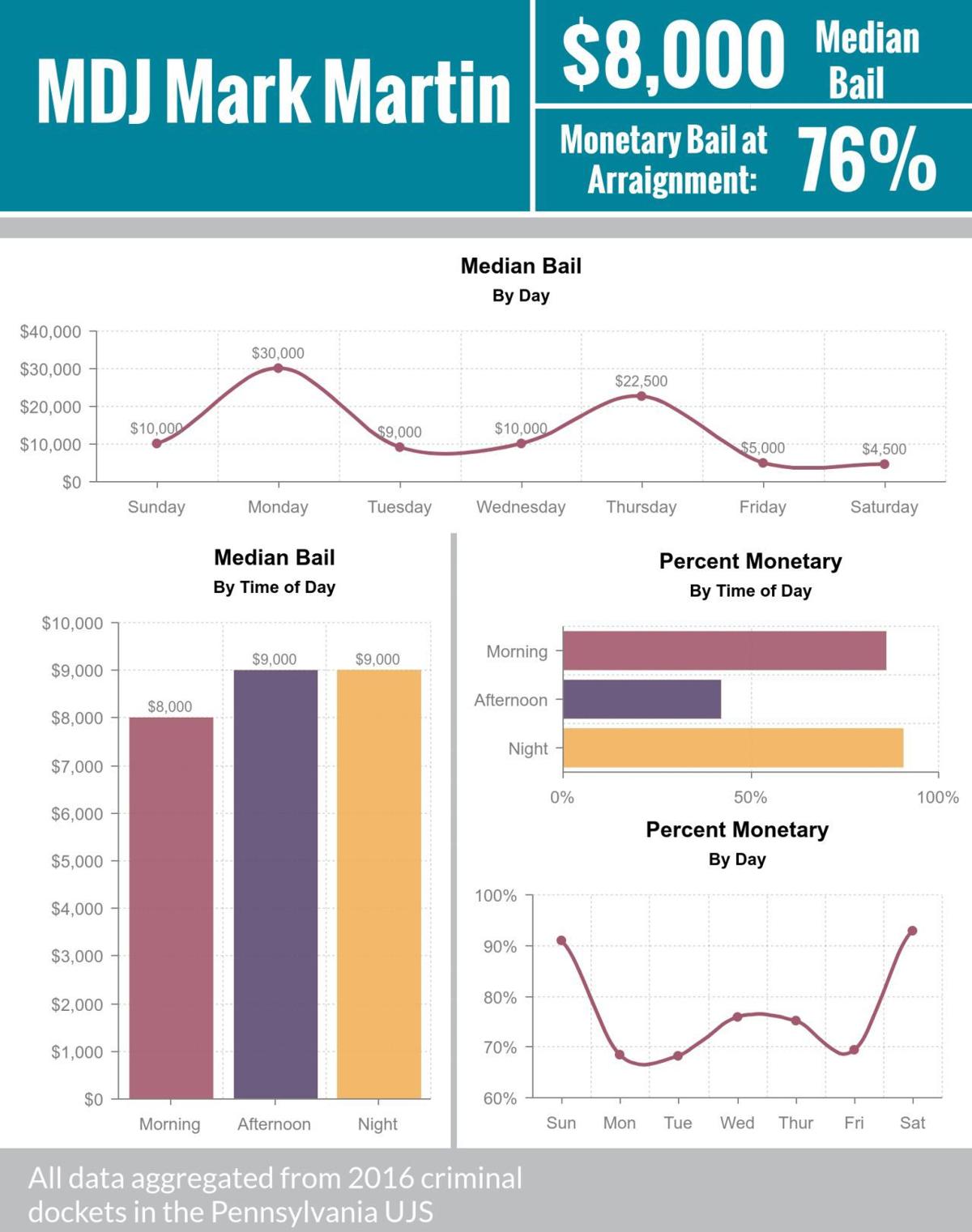 Initial bail decisions in Pennsylvania are usually made by magisterial district judges, who are given wide discretion in determining the type and amount of bail, as well as setting conditions of release.

For defendants, this means whether they go home or sit behind bars can be a matter of where they're arrested and which judge is setting bail.

In 2016, the average defendant in Cumberland County with monetary bail imposed was expected to pay $10,000 to remain out of jail, according to an analysis of court records conducted by The Sentinel.

However, the average defendant in neighboring Franklin County last year was expected to pay three times that, according to court records.

For defendants charged with possession with intent to deliver controlled substances, the difference between the two counties was even greater.

Median bail for defendants charged with selling drugs in Franklin County was $100,000 last year, compared to only $25,000 in Cumberland County.

The variations don’t stop at the county level.

Birbeck, however, did not take office until after the middle of last year.

The analysis reviewed all of the roughly 5,000 criminal cases filed in the county last year and counted cases where the defendant was brought in front of a magisterial district judge for a preliminary arraignment.

These proceedings typically occur around the time of arrest and involve the defendant being informed of the charges, provided with information about obtaining a public defender and having a bail determination made.

Most preliminary arraignments are conducted without a defense attorney present, according Magisterial District Judge Charles Clement.

Cases in which the defendant was issued a summons, usually for lower level offenses, were not included in the analysis.

Both Magisterial District Judges Paul Fegley and Vivian Cohick, who served the full year in office in 2016, had median bail amounts of $25,000.

“Do I feel confident in the bail that I set? Yes, I do,” Cohick said. “I don’t feel that I’m excessive with my bail, because that would be wrong on my part.”

Cohick’s office is in Penn Township and her district includes Newville and several surrounding townships.

“My first thought process is I did not bring you here,” she said about dealing with the consequences of bail. “There has been a charge against you for a violation of the law. This is not just saying ‘you climbed up on the stool and I didn’t want you to climb up on the stool, so I’m going to paddle your butt.'

“A person is being charged with a violation of the law,” she said. “That takes away some of the your free to walk around and do what you want to do.”

Magisterial District Judge Mark Martin, whose district includes the Mechanicsburg area, had a median bail of $8,000 and imposed monetary bail on roughly 76 percent of defendants who came before him for an arraignment.

“I would have thought mine would be higher,” he said.

The Sentinel found no significant difference in the types of charges dealt with at arraignment that could explain the variation in bail amounts.

“Every case has to stand on its own merit,” Cohick said. “You can have two identical, but two polar opposite defendants, that have alleged to have done those same violations.”

Martin said the majority of arraignments he handles occur while he is serving as the on-call judge.

For one week every 10 weeks magisterial district judges in Cumberland County act as the on-call judge and handle all criminal cases that arise outside of normal business hours on top of their normal duties.

“I don’t think (the types of cases arraigned) are going to change significantly from one judge to another because we all have the same chance and probability of getting the same types of cases,” Martin said.

So, what factors do judges take into consideration when making a bail decision?

“There’s all kinds of factors that you consider,” Clement said. “Are they rooted in the community? How long have they lived here? What’s the seriousness of the crime? What’s the likeliness they’ll appear?”

At the time of arraignment, only a small amount of information is available.

Judges also have an opportunity to speak with the defendant to try to find out more relevant factors.

“I like to know if they are employed,” Clement said. “I look to see if they’re employed. If not, how long have they been unemployed?”

Clement said he also tries to ascertain other information like if the defendant is from Pennsylvania or from out-of-state, if they have children and if they are married.

“Are there people in that household who are relying on that person to go to work and help with the household,” he said.

Clement, Martin, Cohick and Magisterial District Judge Richard Dougherty all said they take into account many of the same factors, but Dougherty said he places less weight on whether the defendant is a local resident when making a decision.

All four, however, said they do not have a set criterion for how they decide on bail, noting that each case is decided on its own merits.

“All those factors, you then have to balance and come up with something that isn’t punitive, but more guarantees his appearance while protecting himself and others in the community,” said Dougherty, whose office is in East Pennsboro Township. “It’s a fine balance there.”

Dougherty’s median was $10,000, the same as the county median, and he imposed monetary bail in roughly 82 percent of preliminary arraignments last year, according to court records.

While judges are not bound by it, all four judges said they give extra attention to the bail recommendation from law enforcement, most saying the police have likely had more interaction with the defendant and that safety of the victim is of paramount importance.

In Pennsylvania, charges can be sought by law enforcement without the district attorney’s approval and the prosecutor’s office is generally not involved in the preliminary arraignment.

Cumberland County has a local rule that requires approval from the district attorney’s office for all criminal charges.

A preliminary hearing to determine if there is enough evidence for the case to move forward is held within 14 days of the preliminary arraignment if the defendant is held in custody.

Bail can be modified at this hearing, which Cohick said mitigates some of the possible harmful impacts of a defendant being held for an inability to pay bail.

A breakdown from Sentinel Reporter Joshua Vaighn of how Magisterial District Judges in Cumberland County handled bail decisions in 2016.

Here are the different types of bail given to defendants.