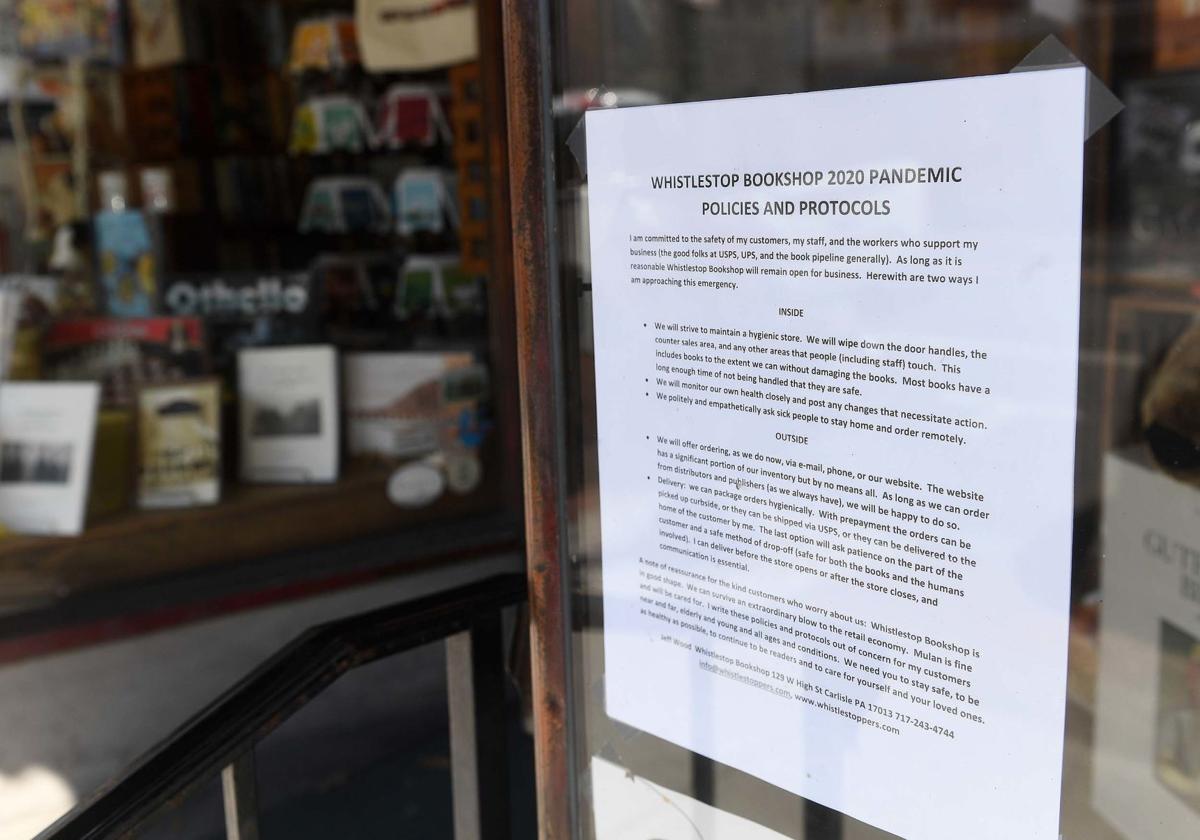 The Whistlestop Bookshop, West High Street, Carlisle, has a sign up listing its policies and protocols for prevention of COVID-19. 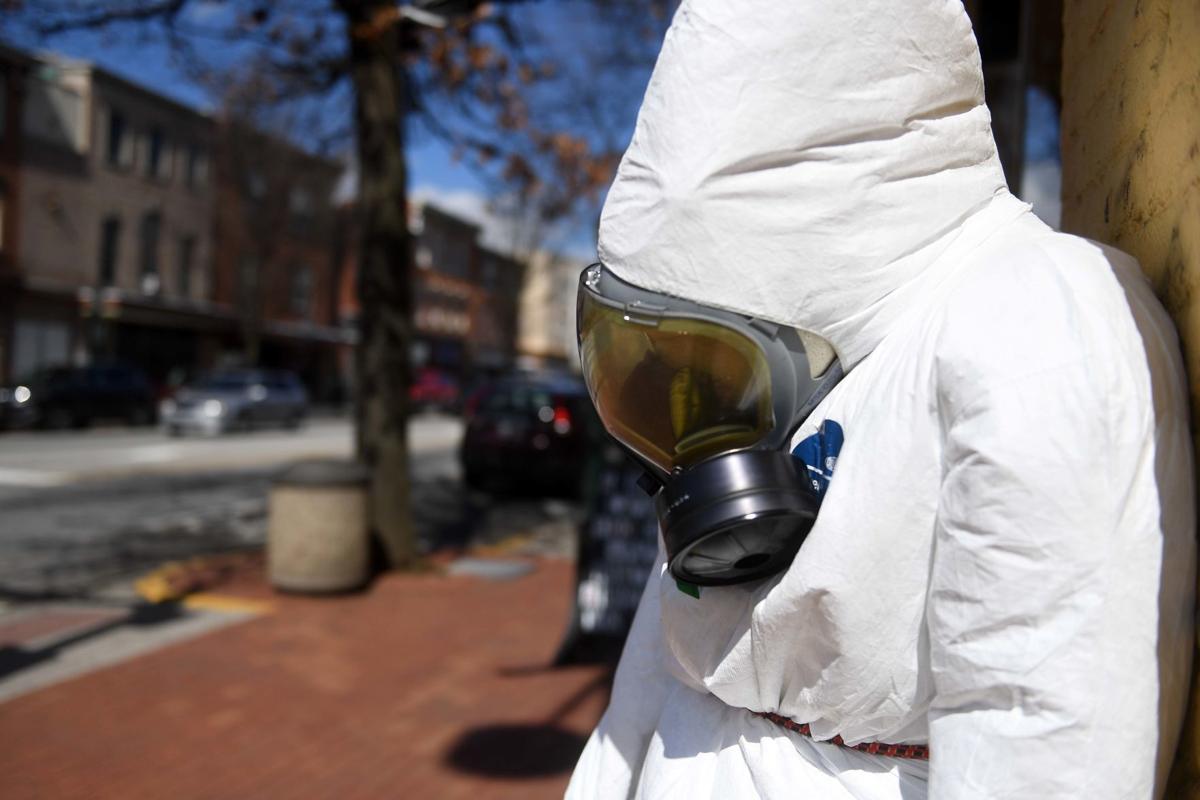 A mannequin decorated in a Hazmat suit with respirator greets pedestrians as it stands in front of Woodmouse LLC Friday on Hanover Street in Carlisle.

The number of Cumberland County presumptive positive cases of COVID-19 rose again Sunday as more businesses and organizations announced their responses to the pandemic.

The Pennsylvania Department of Health announced Sunday at noon that it has confirmed 16 more positive cases of the disease in the state, including two more in Cumberland County. All of the new cases are either in isolation at home or being treated at the hospital, according to the department.

As of noon Sunday, the state’s total number of confirmed cases sat at 63, with five of them in Cumberland County.

The department will not release any more information about those who are infected with the disease. So far, there have been 446 patients to date who have been tested or in the process of being tested. The department said 205 people have tested negative, 63 are presumptive positive and 183 patient samples are either at the state laboratory for testing or are on their way to the lab.

While the department works on doing more testing and working on containment in eastern Pennsylvania where most of the cases are located, others are taking proactive measures to prevent exposure to the coronavirus or helping those who are dealing with fallout from the disease.

On Friday, Gov. Tom Wolf said he ordered the closure of all Pennsylvania schools, and school districts have been working to arrange for low-income students to still be fed in the two weeks school buildings will be closed.

Carlisle Area School District said it is offering students the opportunity to order a school breakfast and lunch during this first week of closure, with pickup locations at Hamilton Elementary School and Mount Holly Springs Elementary School from 9 a.m. to noon Tuesday. The district requires parents complete an online form at www.carlisleschools.org/foodpickup if they wish to order food. All students must be present at the time of pickup.

South Middleton School District on Sunday told parents that they can pick up medication and other personal belongings as needed from 7 a.m. to 3 p.m. Tuesday at Yellow Breeches Middle School and Boiling Springs High School, and from 8 a.m. to 4 p.m. Tuesday from the elementary schools. The district said it has also developed a plan to address meal needs in conjunction with Chartwells and Project SHARE.

Over the weekend, area health systems also announced their responses to the coronavirus.

Penn State Health said it will implement temporary visitation restrictions at its facilities in Dauphin and Berks counties, and only two visitors at a time are allowed at Penn State Health Milton Hershey Medical Center and Penn State Children’s Hospital. Visitors under the age of 18 are not allowed at either hospital campus.

Health officials also ask that family and friends refrain from sending deliveries, like food or flowers, at this time.

UPMC Pinnacle likewise said it will temporarily limit the number of visitors at all of its inpatient and outpatient facilities, including UPMC Carlisle, UPMC Pinnacle West Shore, UPMC Pinnacle Harrisburg and UPMC Pinnacle Community Osteopathic. Those who are being treated for COVID-19 will not be allowed to have any visitors.

Cumberland County announced a number of changes as the area deals with COVID-19 cases. All public libraries in the state, including in the county, will be closed until March 29 as an effort to slow the spread of COVID-19.

According to a post on the library system’s website, no library materials will be due during the closure and no fines will accrue. All online services will remain available.

The county’s Domestic Relations Office said it will conduct all establishments and modifications conferences over the phone, and the Cumberland County Prison is suspending all visitation by family, friends and volunteers until further notice.

Proceedings in criminal and civil matters scheduled in the next 60 days in U.S. Middle District Court in Harrisburg that would involve the presence of an attorney or party have been postponed, with few exceptions.

Chief Judge Christopher C. Conner issued the order Friday, saying he has delayed most proceedings in light of the public health and epidemiological concerns, regarding the transmission of the coronavirus and the recommendation to limit in-person meetings where feasible. Exceptions include a trial that cannot be delayed under federal law and a proceeding conducted by video, the order states.

Mechanicsburg Borough announced that its building on West Allen Street will be closed to all walk-in public counter services until further notice, joining others like Lower Allen Township, Upper Allen Township (limited access) and Silver Spring Township that are also closing their buildings. Mechanicsburg said appointments can be made with the staff by phone or email, and there is a drop-box located to the right of the main door to the borough office for sewer and trash payments.

Newville Borough announced on Facebook its borough office will be closed to the public until further notice, encouraging people to call or email the borough if they have questions. All scheduled public meetings are cancelled through March 27. All public service departments in Newville Borough will remain open. Borough officials said communications would be made on the borough’s website (newvilleborough.com) and on its Facebook page.

The Giant Company announced Saturday that all its 24-hour stores will temporarily start closing at midnight and reopen at 6 a.m. until further notice.

The company said the move will allow employees to sanitize the stores and restock shelves. This move includes stores in Silver Spring Township, Camp Hill and Hampden Township.

The Carlisle Regional Performing Arts Center announced it will temporarily close the theater and its office to the public, effective at least through March 31. New dates for programs and events at the theater, when rescheduled, will be communicated to ticket holders directly.

The Carlisle Family YMCA announced it will close its doors until further notice, which went into effect Sunday evening.

“Our management staff is meeting on Monday to determine a plan for the rest of the week and beyond, including how we will process refunds for any programs that are affected by the closure,” the statement reads.

The Harrisburg Area YMCA said it is canceling all sports, classes, gym activities and organized programs, including Child Watch until further notice.

“The buildings will remain open, but usage areas will be restricted,” according to the Y. “We will not be issuing or honoring guest passes during this time. If you are a childcare participant, please watch your email for a separate communication regarding your child’s schedule. Should further developments dictate a full closure, all members will be notified via app and email.”

Your guide to coping with COVID-19

This interactive guide shows how to protect yourself against infection and recognize symptoms, and worst case, take correct steps if you get sick.

The Whistlestop Bookshop, West High Street, Carlisle, has a sign up listing its policies and protocols for prevention of COVID-19.

A mannequin decorated in a Hazmat suit with respirator greets pedestrians as it stands in front of Woodmouse LLC Friday on Hanover Street in Carlisle.