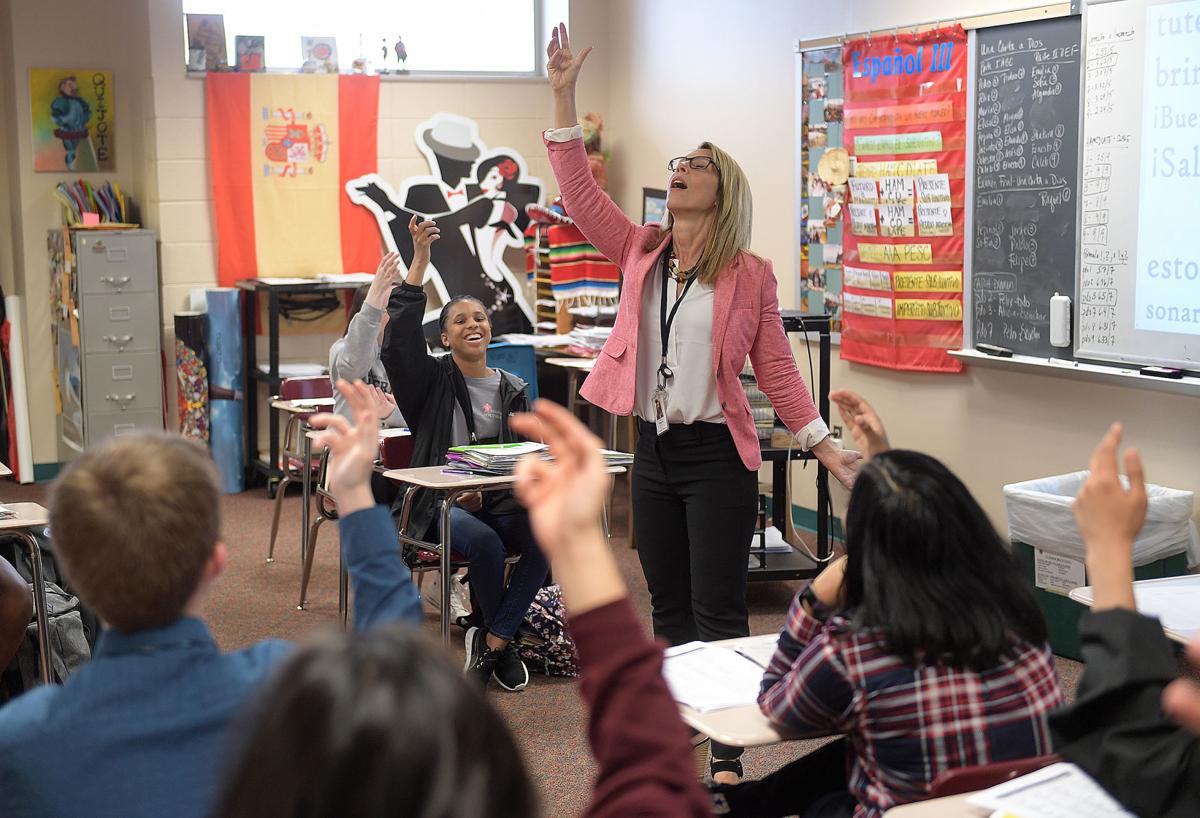 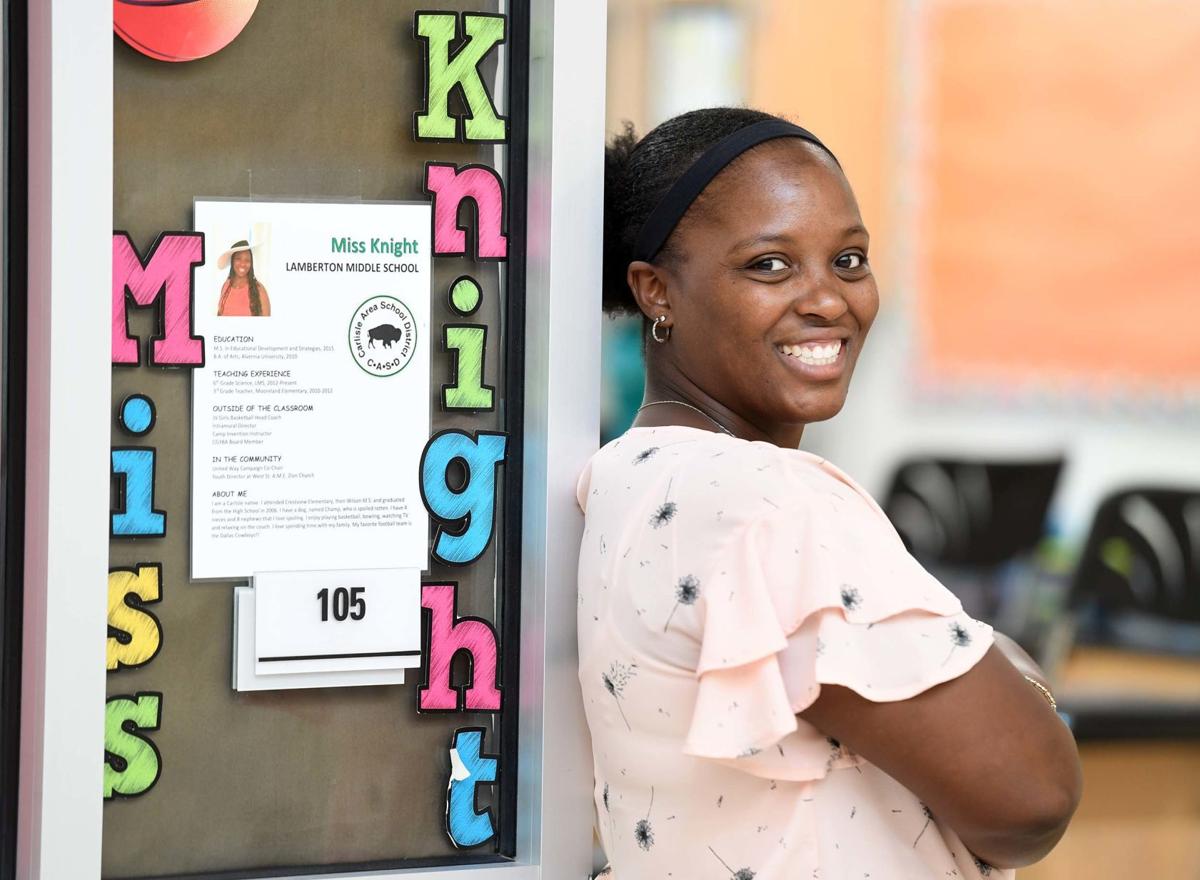 Ashley Knight is an Earth Science and Social Studies teacher at Lamberton Middle School in the Carlisle Area School District.

Ashley Knight said she suspected that, deep down, the boy was racist toward black people.

“He never acted out,” the Carlisle teacher recalled. “He spoke to me when he needed to tell me something. He did what I wanted him to do.”

Standoffish, the boy never shared a story from home or developed a rapport with Knight, she said. Being her student was like a job. He clocked in the time, handed in the work and left after his shift was completed.

“I could sense how uncomfortable he felt,” Knight said. “I was respectful of his wishes. We had a mutual agreement. When you leave here, you don’t have to like me.”

Knight taught third grade at Mooreland Elementary School before becoming a science teacher at Lamberton Middle School. Race relations worked differently with another student she had in class.

The white girl was delighted to have a teacher who was black. It was familiar and comforting. Her family had recently moved from a more racially diverse Washington, D.C.-area school district. They were shocked by how many white people lived in Carlisle.

A Carlisle native, Knight said she was inspired from an early age to pursue a career in education when there were hardly any minority teachers to serve as role models. Even today, she said the number of minority teachers on staff in Carlisle schools is nowhere near the proportion of minority students enrolled in one of the most diverse school districts in Cumberland County.

“Having more teachers of color in the classrooms helps better represent the community in which we live,” Knight said. “It would teach parents and students to be more accepting of different cultures in the role of authority.”

Asia Whittenberger graduated from Boiling Springs High School in 2018. A student of Filipino descent, she grew up in the predominantly white South Middleton School District.

For some students, having a teacher of a different race or ethnicity could mean the world to them, Whittenberger said. “It’s just so important to see yourself. It’s something white students take for granted, someone that looks like them in front of them their whole life.”

The recruitment and retention of teachers from diverse backgrounds is a challenge not just for local school districts but also for public education systems statewide and across the nation, said Michael Gogoj, director of curriculum and instruction for Carlisle Area School District.

“We want our students to experience learning from a staff of diverse backgrounds,” he said, adding that Pennsylvania has one of the highest disparities. Nationwide, 18 percent of teachers and 48 percent of students are minorities compared to Pennsylvania where the numbers are 4 percent and 29 percent, respectively.

Beth Stem, president of the Pennsylvania School Counselors Association, said that as far back as 2014, the number of students of color in public schools has surpassed the number of white students, according to data from the U.S. Department of Education.

“We have been seeing a change in population,” Stem said. “Unfortunately, the number of educators of color is small compared to those who are white. That makes it difficult for school districts to hire teachers that represent their populations. It’s supply and demand.”

Fewer college students seek degrees in education. The number of new teacher certifications issued by the Pennsylvania Department of Education has dropped by two-thirds from about 15,000 in 2009-10 to fewer than 5,000 in 2016-17, said Chris Lilienthal, a spokesman for the Pennsylvania State Education Association.

Even when numbers were more favorable, there were fewer minorities going into the teaching profession, said Christina Spielbauer, superintendent of Carlisle Area School District. Knight obtained her teaching degree from Alvernia University near Reading where she was one of the only minority students in most of her education courses.

Carlisle is located far from any historically black college that could offer incentives for their education majors to observe, student teach or get engaged enough to work for Carlisle Area School District, Knight said. She said many people of color who can’t afford a four-year degree pursue an associate’s degree that would allow them to obtain a certification in preschool education so they could still work with children.

Knight suggested that Carlisle offer some type of incentive that emphasizes the district’s desire to recruit minorities as teachers.

A lot of teachers of color are from urban areas and return to give something back to their home community, said David Christopher, superintendent of Cumberland Valley School District. He said local school districts could do more to support those promising high school juniors and seniors who show an interest in education. The goal would be to create a pipeline of talent that could return to local schools.

Pennsylvania is a mass exporter of teaching talent, Christopher said. States like Virginia and the Carolinas recruit education majors at Shippensburg University as early as October, doing on-the-spot interviews at job fairs and handing out contracts, he said.

“We’re not hanging onto enough kids coming out of college,” he said. “It’s just the way we’re structured.”

Most Pennsylvania school districts are grappling with escalating pension and health care costs that make budgets tighter and vacancies harder to predict. The hope is that students from Pennsylvania who head south early in their careers would eventually relocate to Pennsylvania after they are married and have children so they could be closer to their extended families, Christopher said.

“There is good research that all students benefit from having a diversified teaching workforce,” Lilienthal said. “The truth is there are many school districts that want to hire more teachers that reflect the diversity of their students.”

One proposal under consideration is to increase the state minimum starting salary for teachers from the current $18,500 to $45,000 per year while providing additional state funding to urban and rural school districts that would struggle to meet the new threshold.

“Many people of color teach in diverse school settings in urban areas where there are high community poverty rates,” Lilienthal said. “These are the districts that struggle. Their teachers are not earning as much as other professionals. If you have high-achieving students of color and you want them to go into teaching, make sure we are paying them to be the professionals they are in the classroom.”

Past and present students are leading an effort to add more instruction on Black history and culture in Mechanicsburg schools. The district superintendent is open to a dialogue and change.

Ashley Knight is an Earth Science and Social Studies teacher at Lamberton Middle School in the Carlisle Area School District. 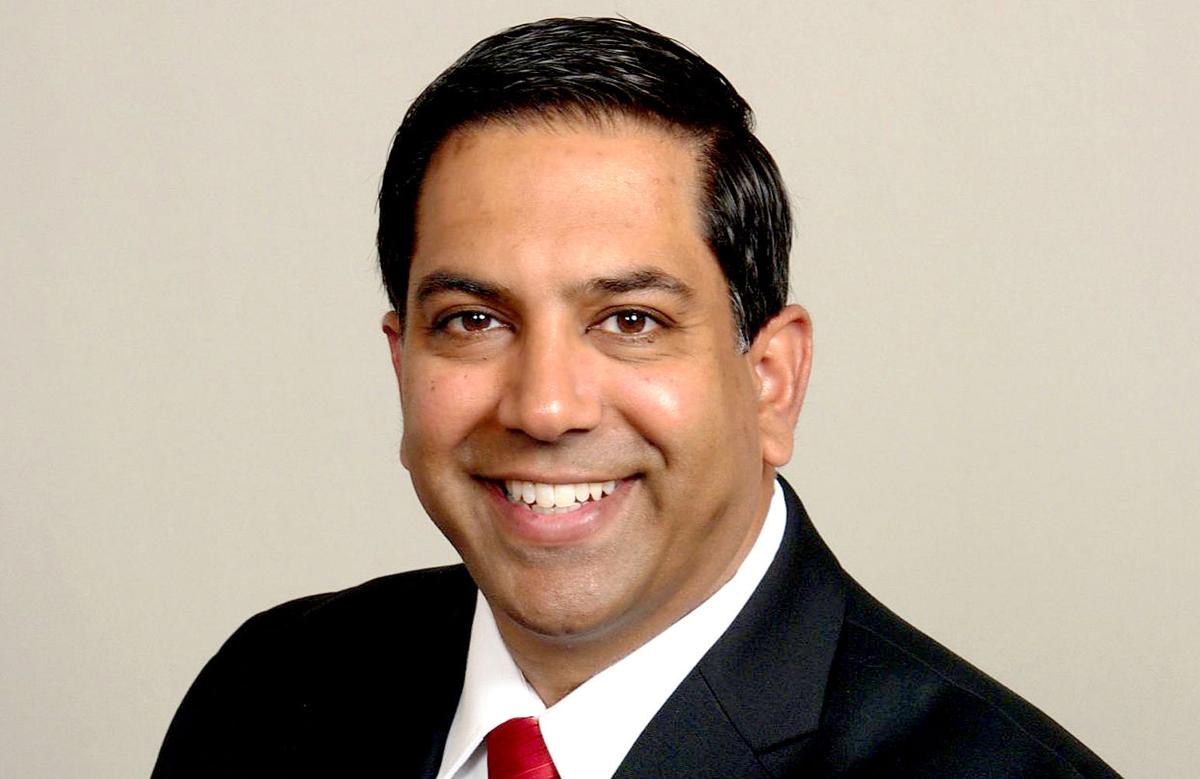