Drafted into the U.S. Army in 1966 at the height of the Vietnam war, Martin Kleiner couldn’t wait to do his two years of service and get out.

“I realized it was a good fit. I really liked what I was doing. I wasn’t cramped up in an office all the time,” he said.

But, it was his training in aviation that led to a partnership that has outlasted two military careers.

Martin served in Vietnam, was wounded and returned to Vietnam for another tour of duty after recovering. In August 1978, he was assigned to the Military District of Washington and served as Commander of the Rotary Wing Priority Air Transport Division at Davison Army Airfield.

It was a position that put him in touch with dignitaries, including the queen of Thailand, at an airfield that also provided flight operations for the Pentagon.

“I worked in flight operations. That’s how we met,” said Carolyn Kleiner.

Over the next decade, Martin continued on active duty taking him to places like New Jersey, Arizona and Germany. Carolyn followed along serving in the Army Reserve and Army National Guard while holding down a civilian job at each posting.

It was at one of those early postings in New Jersey that Carolyn became the first female Distinguished Honor Graduate in the history of the New Jersey Army National Guard Officer Candidate School Academy.

Martin retired in 1992, and the Kleiners thought that was the end of their nomadic Army life.

“We moved to Hampton, Virginia, and said, ‘You can write this address in ink. We’re done.’ Well, we weren’t,” Martin said.

Though she had a degree in marketing, Carolyn still enjoyed her work with the reserves. Soon, they had a discussion and Martin urged her to go back on active duty.

“She did, and then I was the trailing spouse for 14 years and followed her around,” he said.

That took the couple to Connecticut, New Jersey, Hawaii and California as Carolyn did her work in military intelligence.

There’s some symmetry to key points of their careers.

Martin graduated from the U.S. Army War College in 1989. Carolyn, who is 10 years younger, did the same 20 years later.

Martin was inducted into the Officers Candidate Hall of Fame in 2000. About 20 years later, Carolyn, too, was inducted to make them the first married couple to have both been inducted.

Throughout their careers, the couple has never been in a position that forced them to compete with each other. In fact, Carolyn said she never would have made Colonel if it weren’t for her husband.

“Martin’s my biggest supporter and I supported him when I was the spouse,” she said.

Carolyn’s last assignment in the Army took her to the Strategic Studies Institute at the War College, and the couple decided to stay. They had talked about retiring here before, given the town’s proximity to major cities and the fact that it’s retiree and veteran friendly.

“Cumberland County is an agricultural county and one of the things they harvest is Army colonels,” Martin said.

As retirees, the Kleiners continue to serve. They work at their polling site in Carlisle and have volunteered at Project SHARE. They typically go to Sebring, Florida to help with construction on Habitat for Humanity projects through a program called Care-A-Vanner.

What was the toughest challenge you faced?

“Leadership and command of remote detachments located throughout the U.S. From 1998-2012, in five of my seven assignments, those command headquarters had between two and 23 remote detachments located across the U.S. All these locations were understaffed, classified, secure facilities used by multiple reserve intelligence units, often seven days a week. The soldiers manning the sites were inexperienced and had many security requirements to meet to stay operational with the duty to train and support deploying units. It was very challenging to lead, train, resource and mentor from a distance. Despite the many challenges, the Soldiers rose to the task. The unit I commanded at Fort Dix had the honor of being selected as the Best Joint Reserve Intelligence Center of 27 sites nationwide.”

“The challenges. The chance to travel, work and teach in the joint service environment. Equal pay, 30 days of vacation, and promotion based on education and performance.”

What was your proudest achievement?

“I enlisted in the Army as a private from a Pennsylvania dairy farm and retired as a full Colonel at the U.S. Army War College. In order to maintain continuous service and be stationed with my husband while he was on active duty and after his retirement, I served in every Army component—Active Duty, Ready Reserve, Army National Guard and Federal Reserve.”

“No matter which branch of the military we serve in, we take pride in serving our Country and protecting our freedom. The camaraderie, sense of belonging, and dedication to teammates is an experience that is unique and unforgettable.”

“If you are unsure what to do with your life, consider joining the military. You will have many opportunities to learn useful skills, develop discipline and confidence, see new places, and make lifelong friends. You will be amazed at what you can accomplish! Don’t let fear hold you back. Be all you can be!

What was the toughest challenge you faced?

The challenges, adventure and camaraderie.

What was your proudest achievement?

The experiences that you have, the friends that you make and the satisfaction of having done “the hard things” cannot be achieved anywhere else.

It may seem like the military is hard, and sometimes it is, but in the words of Theodore Roosevelt “Nothing in this world is worth having or worth doing unless it means effort, pain, difficulty.” 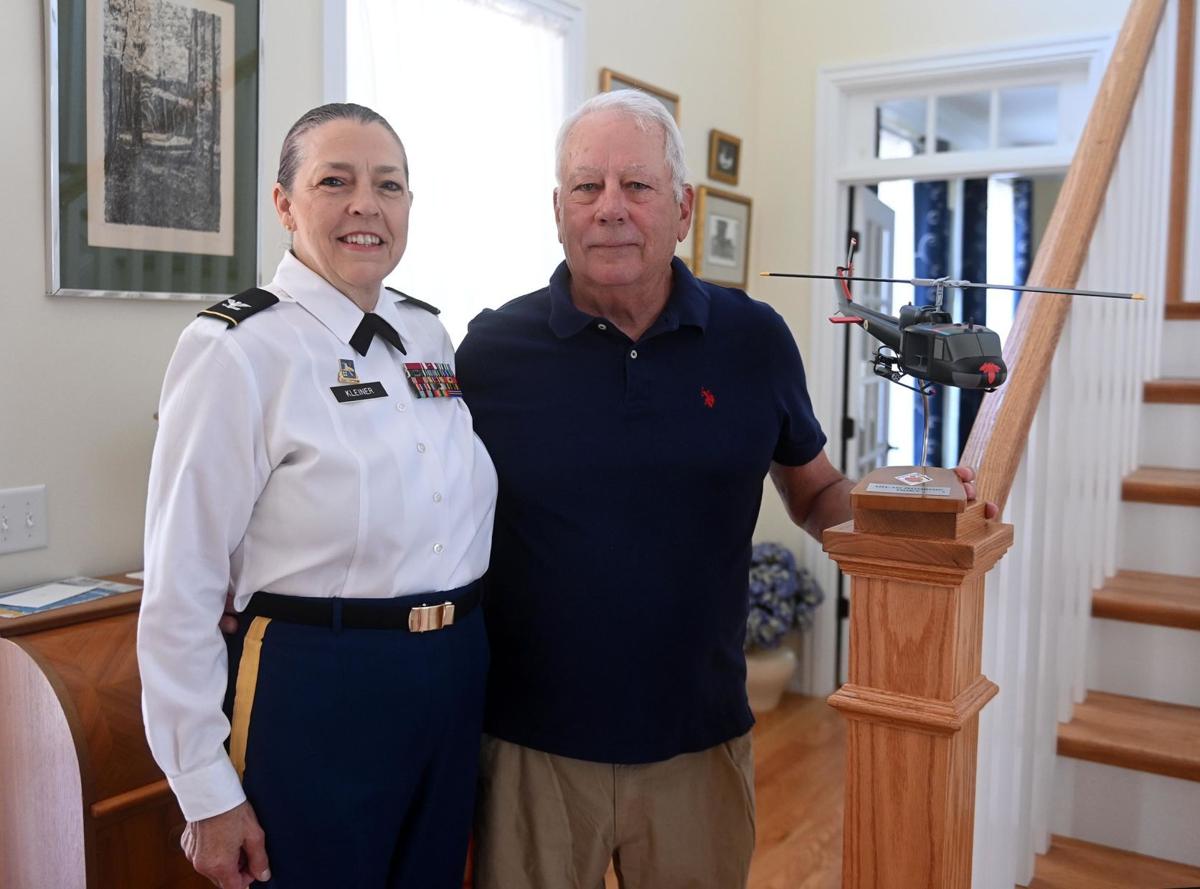 Carolyn and Martin Kleiner of Carlisle were the first married couple to be inducted into the Officers Candidate Hall of Fame in 2000. 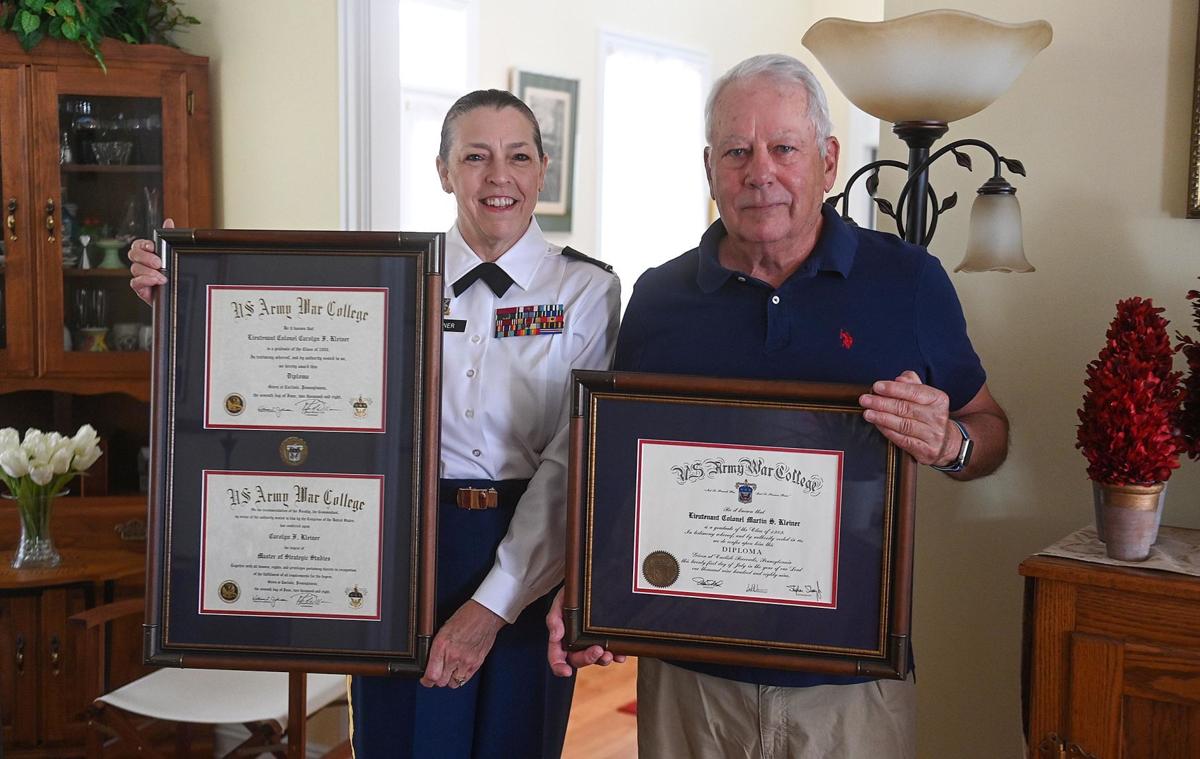 Martin Kleiner, right, graduated from the U.S. Army War College in 1989. Carolyn Kleiner, who is 10 years younger, did the same 20 years later.