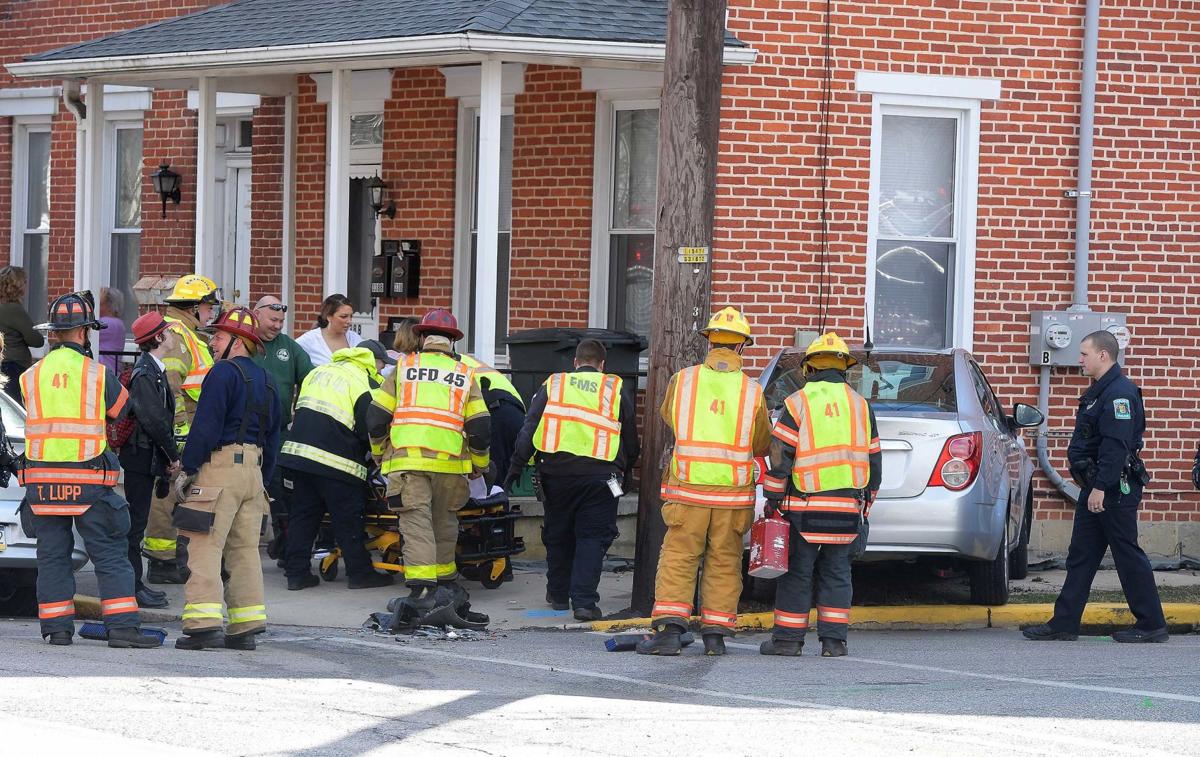 Emergency and rescue crews work to secure the injured occupant of car that was involved in a crash after the vehicle jumped a curb and hit a house March 22 at 338 N. College St. 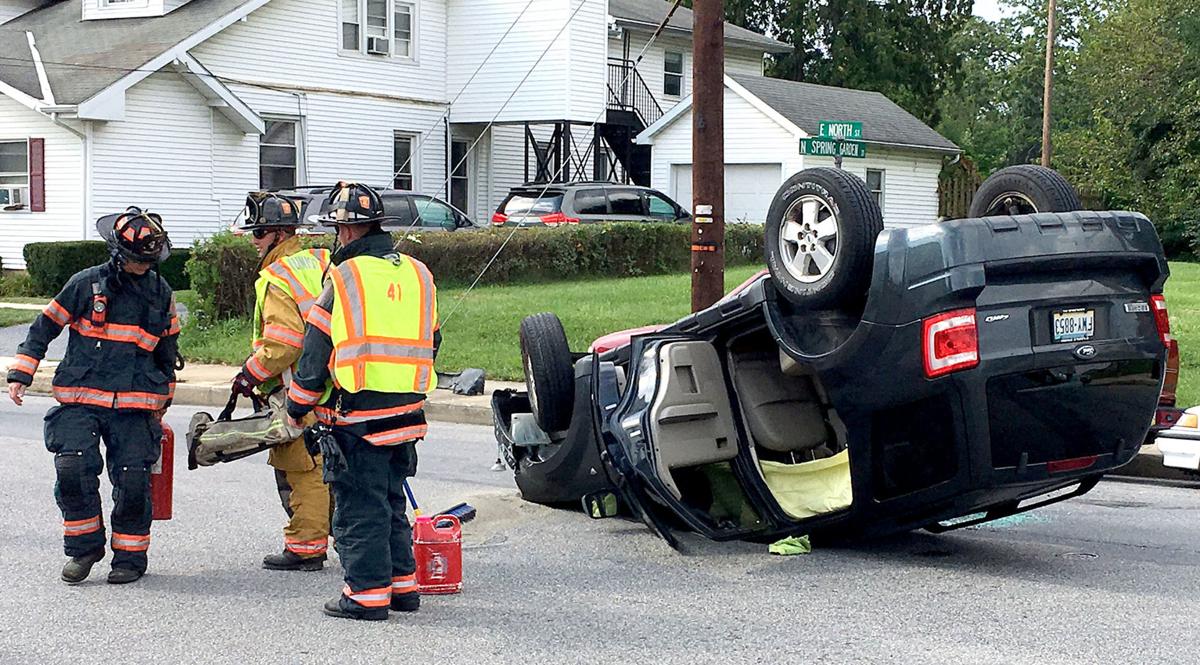 Emergency crews responded to a vehicle that overturned at the intersection of North and Spring Garden streets in Carlisle Aug. 21, 2017.

Even when Interstate 81 is running smoothly, downtown Carlisle traffic can be snarled by crashes, incidents, construction and special events. Add into that common problems like aggressive, distracted or impaired driving and it’s a recipe for potential safety issues.

The 881 crashes investigated in 2016 represents the highest number of crashes since 2005, according to the plan.

The violations most cited by officers, and those for which the department itself receives the most complaints, are related to aggressive driving. This includes violations such as running traffic lights or stop signs as well as passing illegally.

“We have people pass other folks on Hanover Street and High Street. It’s insanity,” said Sgt. David Miller of the Carlisle Police Department.

Aggressive driving contributes to crashes in town, and includes crashes caused by drivers trying to squeeze through on the yellow light when the light is changing or sliding because they are driving too fast in the rain, Miller said.

Since the road diet, rear-end collisions are the most common type of crashes in the borough, Miller said. These usually happen when a driver is distracted and the person in front of them stops for an emergency situation or a traffic light.

Driving under the influence also contributes to crashes, but it isn’t always what people think when they hear the phrase. It can be alcohol, illegal drugs, prescriptions or even over-the-counter medications, said Matthew Frampton of South Central PA Safety.

“A lot of people don’t think of the over-the-counter meds, and it’s especially a concern when you are dealing with folks who are on multiple medications and the interactions,” he said.

Miller wishes the labels on prescription medications would be changed. Too many people see the warning against operating heavy machinery and think about tractors, backhoes and the like, not about the car that becomes a weapon.

“It should say caution when driving because we’re seeing a lot of that. People that don’t intend to do something wrong, but they’re under the influence of some type of narcotic,” Miller said.

Construction projects will be a real concern for drivers in the coming months. A project to replace the bridge that takes East High Street over LeTort Spring Run near the Weis grocery store is expected to start this summer and continue into the summer 2020.

Also this summer, 800 lineal feet of sewer main pipes will be replaced on South Spring Garden Street in a project that will close one lane, and have flaggers directing traffic around the project.

Transportation infrastructure improvements around former industrial sites are also on the horizon with the projects expected to be put out to bid in late summer or early fall, borough manager Matt Candland said. Some construction may be done yet in 2019, but the bulk of the work is expected in 2020.

The roadwork will center on two primary areas. The first is the five-point intersection of North Hanover Street, East and West Penn streets and Fairground Avenue at which a roundabout will be built. Also included in this project is the realignment and signalization of Carlisle Springs Road and North Hanover Street to eliminate a railroad crossing.

That realignment will make it easier for drivers on Carlisle Spring Road to turn onto North Hanover Street, Candland said.

It’s the roundabout, though, that has generated the most discussion on social media. Candland said they do take some getting used to, but the roundabouts will be an improvement.

“Once you figure them out, you get through the intersection so much quicker,” he said.

The second focus area is on a portion of Fairground Avenue and B Street from Fairground to North College Street. This project includes a roundabout at the intersection of B and College streets.

Candland said that project is not to solve issues resulting from the road diet but to alleviate the expected effect of the development at the former industrial sites on traffic.

Opening the “letter streets” through the former sites, for example, will give drivers options to get from one side of town to the other without going onto Hanover or High streets, Candland said.

“It was to make sure we could accommodate the impact of these new developments that we’re going to have,” he said.

Multimodal facilities for pedestrians, cyclists and drivers are built into the design, Candland said.

Roundabouts will provide a mixed bag, though, for pedestrians. In the current configurations at the intersections that will eventually include roundabouts, the pedestrian needs only to look at one light and go when it tells them to.

In roundabouts, pedestrians have to cross in segments, and drivers who are following the law will stop for them, Candland said.

When crashes, incidents or construction close a downtown road, the resulting detours are much easier to deal with thanks to the grid pattern of downtown streets, although Capt. Robert Wertz of the Carlisle Special Regional Police said there are people who simply can’t figure out where to go if their normal route is blocked.

“They don’t know how to go off of the trail. They have one route and that’s it,” he said.

So, he said, one way to keep traffic moving in Carlisle is to have alternate routes in mind should your primary route be blocked or busy.

Frampton asked drivers to be courteous, put away distractions and to have patience with both the fire police and with other motorists when they pass by a crash scene whether in town or on the highway.

“We need you to pay attention to the people directing traffic, not the crash itself,” Frampton said.

“We’ve had so many secondary accidents because of rubbernecking,” Miller said.

Wertz, Miller and Frampton said they have all seen drivers record a crash scene on their cellphones as they drive past.

Holding up a cellphone to record an accident scene covers all three, he said.

There are some things drivers can do to make the roads safer.

The first is to slow down. It’s difficult to speed in the downtown, but officers have cited drivers for driving 50 miles per hour in a 25 miles per hour zone on the borough’s side streets, Miller said.

If a road is blocked with cones, a barricade, a sign or a fire police vehicle, drivers need to understand it is closed for a reason and should not go around it. With limited personnel, the fire police sometimes have to put up the closure but can’t have a person at the intersection, Wertz said.

He remembers an incident in which a street was blocked due to a downed wire. Wertz put up cones to close the road and returned to the site of the downed wire to protect the scene. Soon, a woman drove up the road. Wentz stopped her and asked if she had seen the signs. She said she had, but was able to get around it. He pointed to the live wire, much to her surprise.

Drivers should leave early so they can be under less pressure to get somewhere on time, and take a more relaxed approach to driving that will allow them to slow down and pay attention, Miller said. He also said that those confused by detours due to road construction or accidents should slow down and absorb what’s happening so they can make accurate decisions.

Miller also cautions against relying solely on the warning systems that have become increasingly popular features in newer model cars.

“Nothing beats a person who is paying attention and processing information at a speed that a computer cannot,” he said.

Looking to the future

For now, those who have to get through Carlisle will need to rely on cars, bicycles and their own two feet to get around town.

Lack of support, loss of funding led to end of Carlisle Circulator

Despite officials’ high hopes for the Carlisle Circulator demonstration project, the bus routes never took hold in the community.

The Carlisle Circulator project, which closed in 2017 after three years of operation, showed there was not enough interest in the borough for a public transportation system, Candland said. The circulator provided fixed-route service in downtown Carlisle, connecting riders with common shopping and work destinations as well as interchanges with CAT’s buses that run to Harrisburg.

Candland said he’s “fairly well assured” that the borough isn’t ready for public transportation “until driving your car gets uncomfortable enough or is expensive enough.”

Miller is confident there will be a time when mass transit is more accepted, and better ways to move people will be developed. In the meantime, he warns travelers to continue to keep safety in mind as the streets become more crowded.

“The reality is we live in a world where there’s only going to be more and more cars,” Miller said.

This week The Sentinel takes a Closer Look at Navigating Carlisle.

Has the road diet done what it promised, and can anything more be done?

How do first responders deal with detours when the interstate comes into town?

What can the borough do with state roads within its borders?

How do drivers deal with downtown traffic?

How can bicycling become a better transportation option?

Where can visitors park, and is there enough parking?

Why doesn’t Carlisle have a snow emergency ordinance?

Navigating Carlisle Day 2: The hazards of taking a drive through the downtown

Astronomers have pinpointed the center of the Solar System

Astronomers have pinpointed the center of the Solar System

Emergency and rescue crews work to secure the injured occupant of car that was involved in a crash after the vehicle jumped a curb and hit a house March 22 at 338 N. College St.

Emergency crews responded to a vehicle that overturned at the intersection of North and Spring Garden streets in Carlisle Aug. 21, 2017.