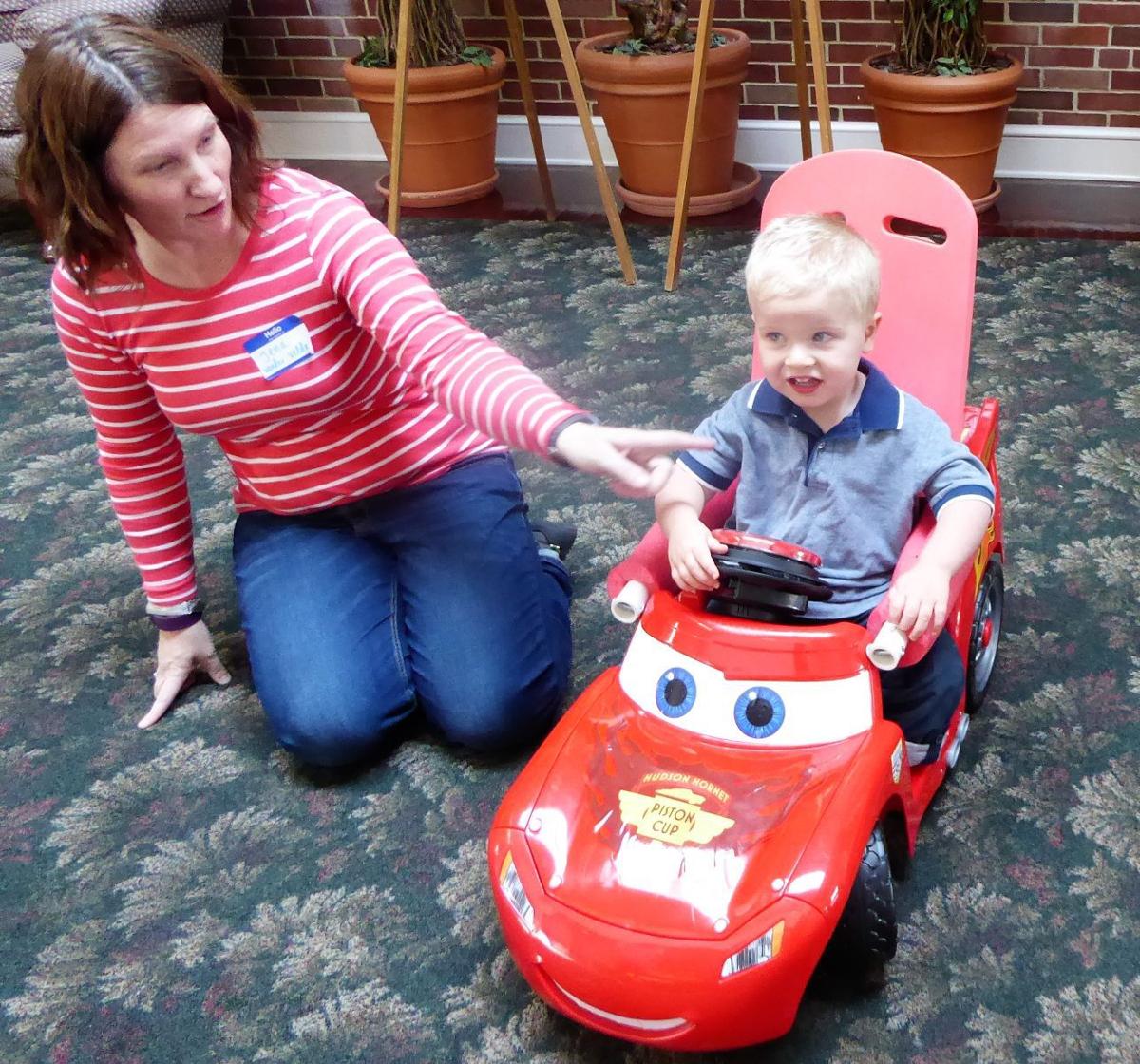 Roland Thomas takes a spin in his modified electric vehicle under the supervision of therapist Jenna Vander Velden May 2 at Trinity Lutheran Church in Camp Hill. 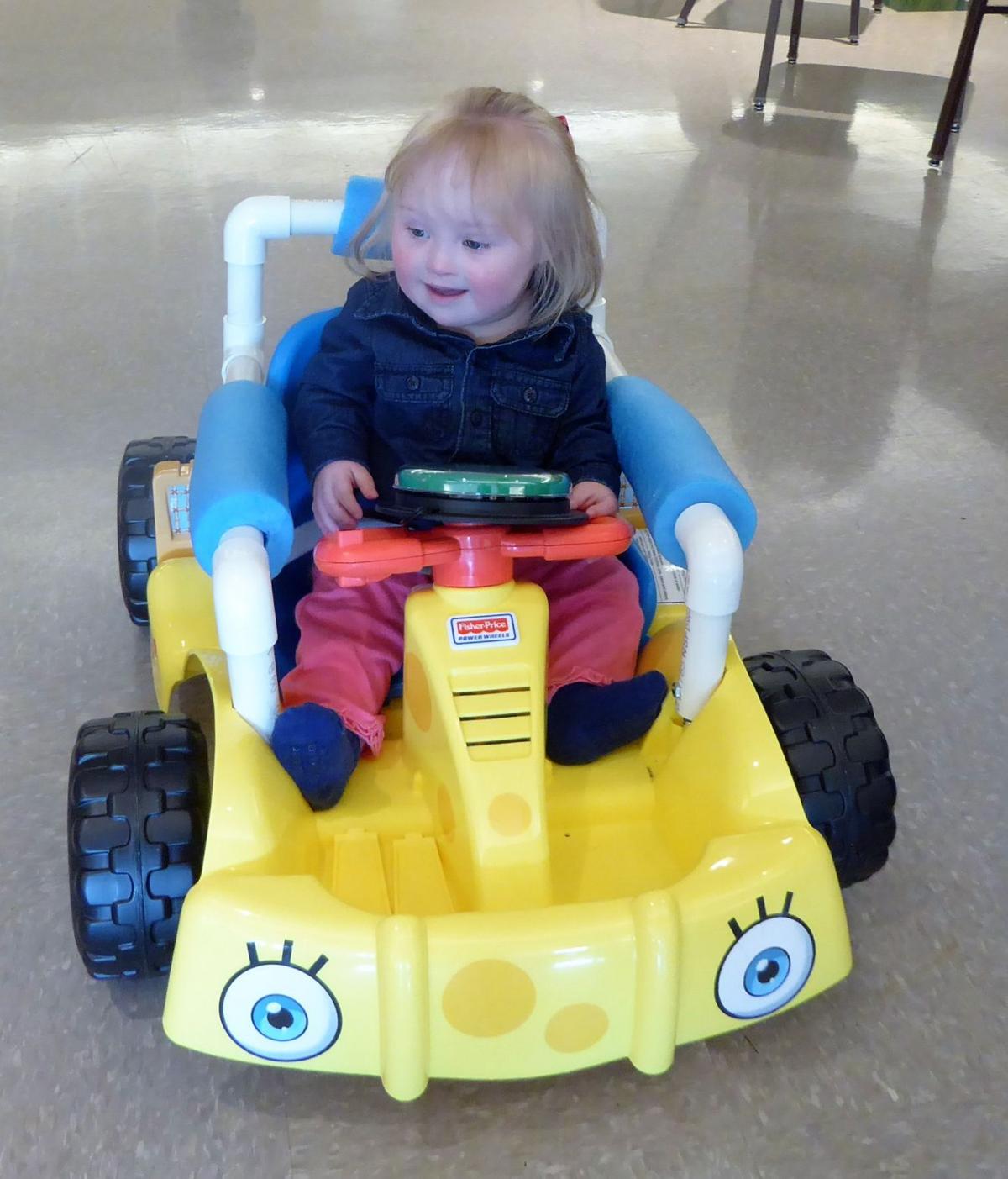 Peyton Reinhard, 16 months, of Enola, takes a spin in a modified toy car during a GoBabyGo! workshop at Trinity Lutheran Church in Camp Hill.

Smiles and laughter were plentiful at Trinity Lutheran Church in Camp Hill last week as children zipped around the room in their brand new rides.

Roland Thomas, 2, looked up at his parents, Lowell and Renee, for direction, then punched the oversized button located on the steering wheel of his electric car and began circling around the space with about a dozen of his peers.

“All the big kids ride the four-wheelers, so for him, this is pretty cool,” Renee Thomas said.

The Mechanicsburg residents were part of the “GoBabyGo!” event sponsored by Central Penn College and hosted by Sovia Therapy of Mechanicsburg.

Earlier in the day, the couple joined other parents, along with therapists, volunteers, Sovia Therapy staff and Central Penn College occupational therapy assistant students at a workshop led by Sam Logan from Oregon State University. Logan led the group workshop on how to retrofit off-the-shelf Power Wheels-type vehicles for children with disabilities.

Kelly Rice, who owns Sovia Therapy, said she learned about “GoBabyGo!” from one of her instructors who has a daughter who is physically handicapped. “She can’t walk or move on her own and we did a ‘build’ for her at the Maryland School for the Blind,” she said.

The workshop inspired Rice to bring the concept to Central Pennsylvania. “We know from the research that putting children into power mobility causes them to want to move independently and faster on their own.”

She said the project makes sense from an economic standpoint as well. “At 9 or 10 months, you can put them into a power wheelchair, but getting insurance to pay is really difficult.”

Inexpensive materials like pool noodles and PVC pipe are used to retrofit the toy cars. “We estimate the cost to be about $100 for the cars and $100 for the modification,” Logan said.

Rice said Oregon State’s mission is to promote the concept without benefiting financially. “During this particular workshop, we did 12 ‘builds.’ We pay the travel expense and an honorarium.”

In return, the college asks those who benefit from the workshop to pay it forward. “Logan asked me to share all the documents, which include a step-by-step manual,” Rice said. “We cover about 10 counties now and these will go out to all the therapists in all the surrounding counties; that’s the beauty of it all.”

In keeping with the “pay it forward” theme, those participating in this particular workshop were asked to give the cars to clinicians or another child who will benefit when their child grows out of it, according to organizers.

Sixteen-month-old Peyton Reinhard of Enola had no trouble ruling the road. She rounded a corner at a good clip in her bright yellow “SpongeBob” car as her mother, Heather, watched with amusement.

“She has Down syndrome and is delayed in sitting and standing,” Heather explained, remarking on how much fun her daughter appeared to be having. “I think it will be good social interaction for her.”

Rice, who teaches pediatrics at Central Penn College, was so inspired by the success of the event that her wheels are turning now too as she considers ways to keep the momentum going. “I would love to set up a mobility lab so that the families can build the cars right there in the classroom.”

To learn more about GoBabyGo!, visit the website at www.udel.edu/gobabygo.

Roland Thomas takes a spin in his modified electric vehicle under the supervision of therapist Jenna Vander Velden May 2 at Trinity Lutheran Church in Camp Hill.

Peyton Reinhard, 16 months, of Enola, takes a spin in a modified toy car during a GoBabyGo! workshop at Trinity Lutheran Church in Camp Hill.