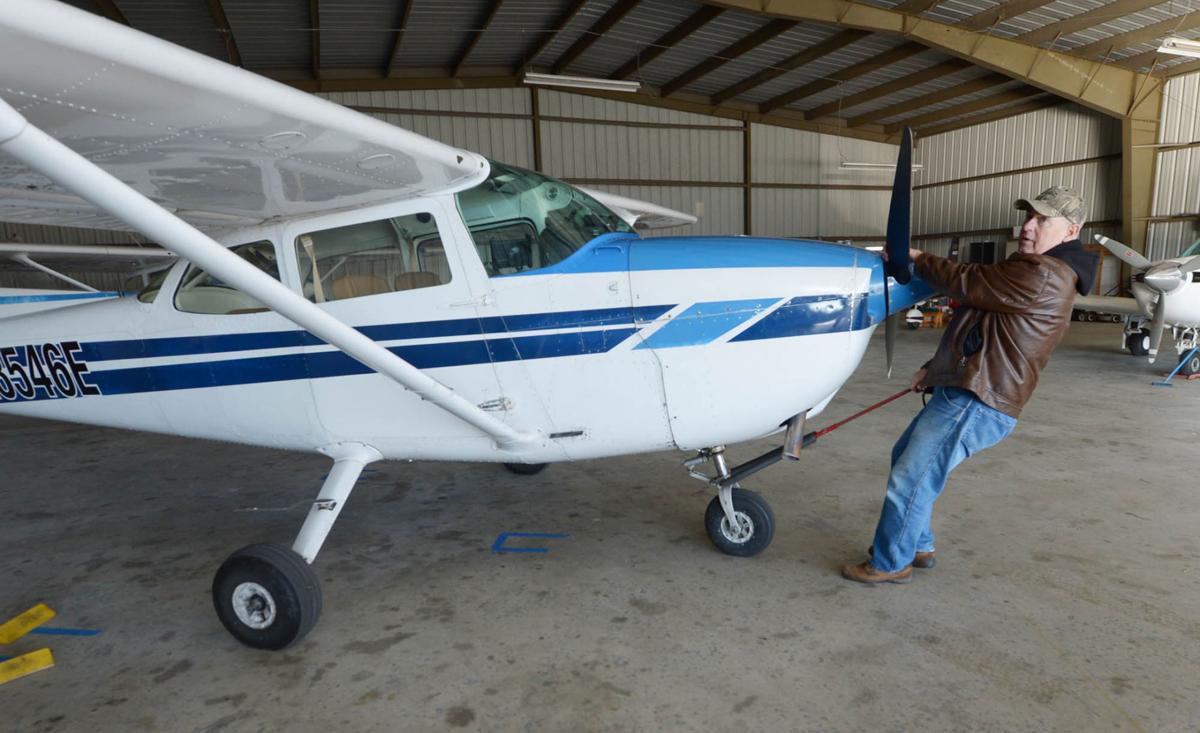 Wayne Rearick removes his plane from the hanger at Carlisle Airport Thursday, Jan. 07, 2016.

With privatization of government services being a common topic, it seems a bit odd to be discussing publicization – if that’s even the word for it.

But county agencies are seriously looking into the notion of a public purchase of the Carlisle Airport, likely by establishing some sort of government-owned agency that would acquire the airfield from its current private ownership.

“It’s not that the airport is in rough shape; they’ve made money every year and their financials are stable,” said Mary Kuna of the Cumberland Area Economic Development Corporation, a county-owned nonprofit agency. “But the ownership is getting up there in age and they see this as a way to keep the airport relevant after they are out of it.”

The airport has existed since 1963. Since the 1990s, it has been led by a six-person group of investors helmed by local aviator Jim Kingsborough. But as the group ages, Kingsborough, said, they would rather not have their savings tied up in a hard asset such as the airport.

Further, if the facility was publicly owned, it would qualify for additional funding. The Commonwealth of Pennsylvania can kick in up to 75 percent of the cost for capital improvements on privately-owned airports as long as they are publicly-accessible, with funds being drawn from the state’s fuel tax. The federal government, however, is more stringent.

“If you’re private-owned public-use, you still get zero federal dollars,” Kingsborough said, “whereas all the publicly owned airports around us get federal dollars to do improvements.”

What exactly the purchasing entity would look like is still up in the air, and will likely be hashed out as CAEDC assembles representatives from surrounding townships and municipalities who have an interest in the airport’s continued existence.

“We’re going to try to get everyone meeting within the next two months or so and see what happens. They would need to determine what entity exactly would be making the purchase and then go through the public process for that authority. Other than that, much of it is not much different than any other real estate transaction.”

The Carlisle Airport’s impact on the surrounding economy is hard to determine exactly. The most recent filing with the Pennsylvania Department of Transportation estimates that the facility does $3.8 million in direct spending, and another $2.9 million in indirect impact, such as consumer spending by airport employees.

Net economic enhancement, taking into account all peripheral benefits, is pegged at $7 million.

A total of 60 aircraft are based in Carlisle, and the airport hosts about 24,500 flights per year, the DOT estimated.

Business charters, flying representatives in and out of the area’s offices, factories, and distribution centers, are the bulk of the airport’s activity. Regular commercial flights have never been part of the vision, Kingsborough said.

“We’re not going to get airlines in the Carlisle Airport. It’s not geared up for that and we don’t have the space,” Kingsborough said. “The goal has always been economic growth and stimulus for the surrounding businesses.”

Who exactly takes over the airport depends on what entities have the greatest interest in keeping it around, said Fran Strouse, an aviation consultant who has worked with the Carlisle Airport as well as others in the state.

Strouse said he has seen situations where a single public entity buys out an airport, as well as situations where several entities come together to sponsor a separate agency that becomes the owner. The development of the New Garden Flying Field in Chester County, for instance, involved New Garden Township as a sole buyer.

On the other hand, Strouse has also worked through the Susquehanna Regional Airport Authority, which has several county and municipal governments as stakeholders in the Franklin County Regional, Gettysburg Regional, Capital City, and Harrisburg International airports.

“In New Garden, it was the township as a sole entity,” Strouse said. “Susquehanna would be the other end of the spectrum, where you have multiple public entities who are coming together to form an airport authority with the members of the authority coming from each of those entities. It really depends on what entities see what in terms of economic value.”

Whether the airport is owned directly by a government entity, or by an arms-length authority, the liability of operations is typically transferred to the private sector though the use of what airport gurus called a “fixed-based operator” or FBO.

“An FBO is a private entity that typically provides several services,” Strouse said. “They will pump fuel, and depending on who owns the fuel facility, they will get a direct profit from fuel sails or an indirect profit. They’re also leasing hangars and tying down aircraft, and will get income from those services. They may also get money from aircraft maintenance or by running a flight school or charter service.”

Some FBO agreements may even have the operator paying the authority for a lease, if the airport’s income generation is high enough. The only direct employee of the government agency may be a single manager who runs the books while the FBO handles the practical operations.

In fact, Kingsborough said that his current staff would be able to continue on as an FBO if a public takeover went through.

“We would run the airport for the public entity if they want us to do that,” Kingsborough said. “They’re free to do it themselves, or to select another operator, but we are interested.”

This would essentially mean that the airport would not change in function. Rather, Strouse said, such deals typically involve the money from the public buyout being used by the former owner to invest in new assets for the FBO. These, combined with federal dollars, can greatly improve an airport.

Kingsborough has several items in mind, particularly upgrades to the hangars used by Life Lion medevac helicopters, one of the airport’s long-term tenants. A taxiway, so that landed aircraft don’t have to return to their hangers via the runway itself, would also improve traffic flow.

Whatever the terms of a public purchase end up being, it would be a one-time cost – most all public airports are run as break-even operations, neither profiting from the community nor requiring public dollars to operate.

“A public entity that is taking over an airport really needs to have a strong business plan, so that when they take over they know the airport is financially self-sustaining and you don’t have taxpayers subsidizing the service,” Strouse said.

A 78-year-old Enola man faces homicide charges after allegedly shooting his wife and killing his adult daughter a short time after police visited the home Saturday.

Parents in South Middleton Township are concerned about how the school district plans to implement a new initiative to build Justice, Equity, Diversity and Inclusion into the school culture.

Today's Sentinel police log includes a scam warning in which a caller threatens to place residents on the sex offender registry, and rising reports of thefts from unlocked vehicles on the West Shore.

About 70% of the Boiling Springs High School students who responded to a survey favor the continuation of hybrid instruction over a return to full time in-person instruction this late in the academic year.

Today's Sentinel police log includes a DUI arrest after a Carlisle crash, and a single-vehicle crash in South Middleton.

The reversal is only in effect for district ninth graders during the 2021-22 school year, Superintendent David Christopher verified on Thursday.

Most of the institutions of higher learning in Cumberland County have yet to make a final decision about the possibility of COVID-19 vaccine requirements.

Wayne Rearick removes his plane from the hanger at Carlisle Airport Thursday, Jan. 07, 2016.