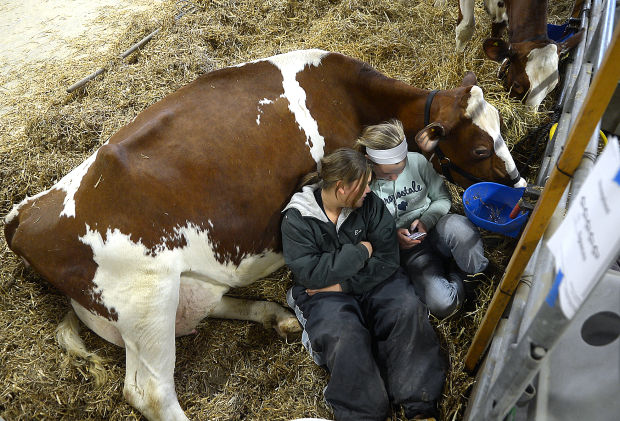 Erin Hoffman, 11, left, and Kristin Johns, 13, play with a cell phone as they take a break from attending their cows at the 2014 Pennsylvania Farm Show. 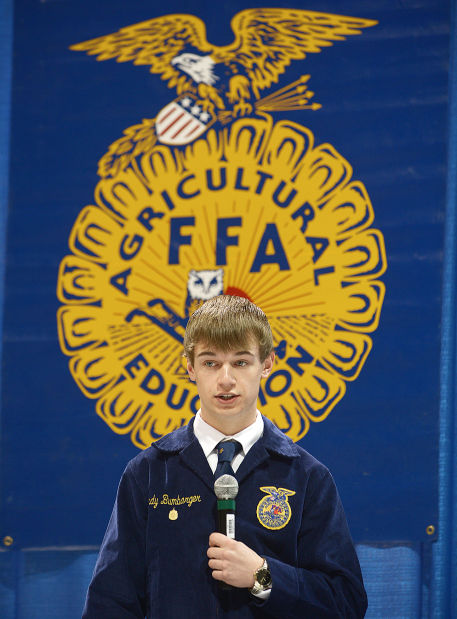 Future Farmers of America member Andy Bumbarger, 16, a sophomore at Big Spring High School, gives a presentation along with Makayla Sturtz, 17, and Brittany Wagner, 17, about fish conservation in Pennsylvania streams and rivers on Wednesday morning at the 2014 Pennsylvania Farm Show. 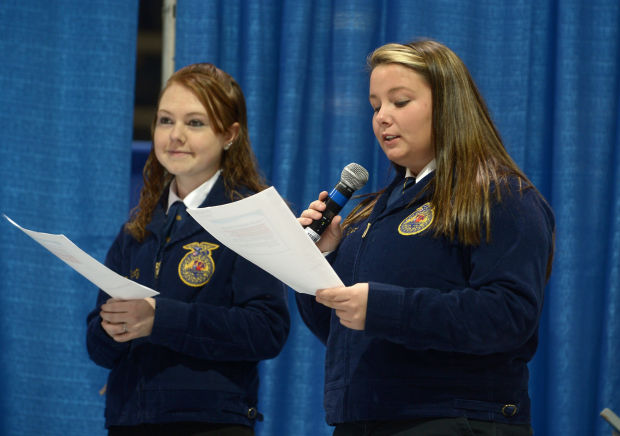 Future Farmers of America members Makayla Sturtz, 17, left, and Brittany Wagner, 17, give a presentation about fish conservation in Pennsylvania streams and rivers on Wednesday morning at the 2014 Pennsylvania Farm Show. 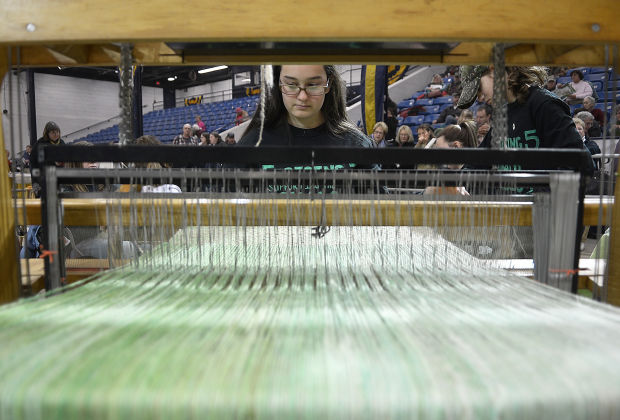 Elizabeth Villanueva, team weaver for The Fibering Five, works at a methodical pace as she competes in the Youth Fleece to Shawl Competition on Wednesday morning at the 2014 Pennsylvania Farm Show. 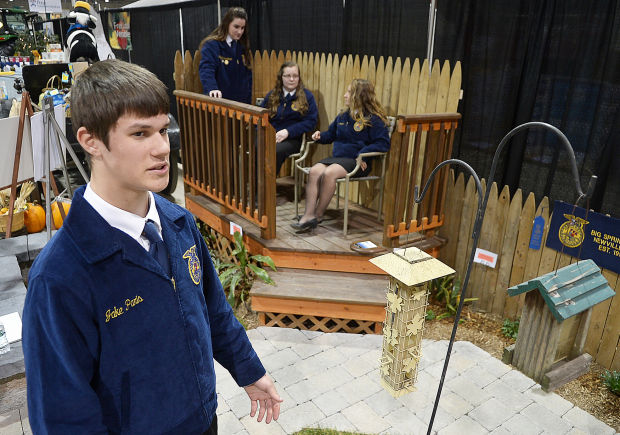 A disconnect exists between society and agriculture, which experts say is rooted in a lack of appreciation for what it takes to bring food from the farm to the fork.

One result of that disconnect has been fewer young people entering farming at a time when the average age of a principal operator in Cumberland County is 54, according to the National Agricultural Statistics Service in Harrisburg.

“We are getting so removed from our food supply,” said Nathan Repetz, 18, president of the Pennsylvania State 4-H Council. “Once you are removed from anything for too long, you start to lose track of it.”

Family ties have kept the New Cumberland teen connected to agriculture. Both his mother and grandmother were active in 4-H, a youth development program. His grandfather Charles Itle worked the Pennsylvania Farm Show for 30 years and once served as its livestock manager.

But in the Cedar Cliff High School Class of 2013, Repetz was more the exception than the rule. He was the only graduate known by the guidance counselor to be pursuing agriculture as a career choice. For Repetz, the desire to help the public reconnect to the farm is driving his goal to earn a degree in agricultural and extension education from Penn State University. He is a freshman at the Altoona campus.

“The industry is taking a hit because people do not appreciate it enough,” Repetz said of agriculture. “People do not give it enough credit.”

This disconnect from farming was brought about by cultural changes made over time.

When Cumberland County was first settled, the majority of its population had close ties to agriculture and more of an awareness of what went into production.

As industries outside agriculture began to emerge, the technology of farming improved, resulting in greater efficiency and less of a demand for labor, said Sherisa Nailor, an agriculture teacher at Big Spring High School.

Being able to do more with less people freed up many growing up on farms to explore other career fields, Nailor said. She added some of those who went to college came back with new ideas and methods of farming that set them at odds with the older generation of farmers uncomfortable with change.

Children raised on farms often live with the financial struggles of trying to keep a family operation profitable, Repetz said. They see what their parents have to deal with and wonder if they want to put themselves through it. Some opt out entirely rather than carry on the farm tradition through the next generation.

“It goes all the way down to people who have no idea where their food comes from,” Repetz said. “I want to bring awareness to the number one industry in Pennsylvania — and it can be argued the most important industry to civilization.”

The concern Nailor and other experts have is whether the trend has reached the point where society needs to worry about who is going to produce food for future generations. Today, only 1.5 to 2 percent of the American population lives on a farm, said Dave Swartz, county director of the Penn State Cooperative Extension.

One result of this disconnect has been a change in the way the current generation and society in general views farmers.

All too often, people look down upon those who work the land as less-skilled, less-smart and less-driven, when the work is actually more technical and complex than credited, Repetz said. “

It is not appealing by society to do hard work in the sun or the dirt,” he said.

There is a misconception that a young person cannot make as much money in farming as they could with a white collar job, said Tyler Brown, 17, a senior at Cumberland Valley High School and a member of the local FFA chapter.

“If you get into farming and pull the right ties, you can be successful and make a lot of money,” Tyler said. “People want to get more money for doing the least amount of work possible, where in farming you can get more money, but you work really hard.

“I don’t think agriculture is understood at all,” he added. “Everything you have in everyday life comes from farming. People take it for granted.”

Local farmer Bert Myers said society needs to get away from the idea that a young person needs a college education and a white collar job to be successful. He agreed that the perception exists among some in society that the hard work that goes into farming does not necessarily equate to tangible rewards.

His advice to young people is to pursue a path where they feel productive and fulfilled and where they are helping the community.

As a teacher, Nailor said he believes the pressure on youth not to pursue farming and other hands-on, jobs comes more from outside influences like society, parents and guidance counselors, rather than the students themselves.

“A college education is great ... We will never discourage it especially if that is what the career will call for,” Nailor said.

She added, however, that students who go into the trades and farming can earn a decent living with a certification right out of school without having to be in debt, paying off student loans.

“The biggest thing we can do as a culture is just learn how to value good food,” said Brooks Miller, a Perry County farmer. “If we learn how to value food, people would be willing to pay more for it. If nobody values food than why would you want to be a producer of it?”

Future of Farming: Young farmers turn away from tradition

It took being adrift in an ocean of cubicles to bring Brooks Miller back down to earth.

Sherisa Nailor is not one to sugar coat the risks and rewards associated with the around-the-clock demands of farming in the 21st century.

Erin Hoffman, 11, left, and Kristin Johns, 13, play with a cell phone as they take a break from attending their cows at the 2014 Pennsylvania Farm Show.

Future Farmers of America member Andy Bumbarger, 16, a sophomore at Big Spring High School, gives a presentation along with Makayla Sturtz, 17, and Brittany Wagner, 17, about fish conservation in Pennsylvania streams and rivers on Wednesday morning at the 2014 Pennsylvania Farm Show.

Future Farmers of America members Makayla Sturtz, 17, left, and Brittany Wagner, 17, give a presentation about fish conservation in Pennsylvania streams and rivers on Wednesday morning at the 2014 Pennsylvania Farm Show.

Elizabeth Villanueva, team weaver for The Fibering Five, works at a methodical pace as she competes in the Youth Fleece to Shawl Competition on Wednesday morning at the 2014 Pennsylvania Farm Show.