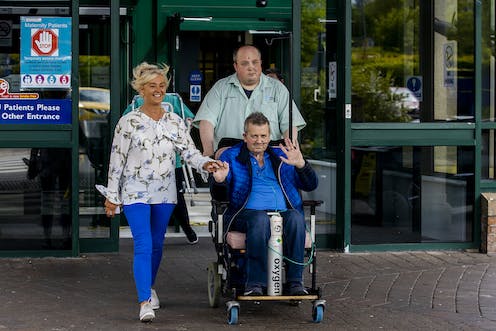 Geoffrey McKillop (front) with his partner Nicola Dallet McConaghie as they left the hospital where he was discharged after surviving coronavirus. Liam McBurney/PA Images via Getty Images

With over 2 million cases in the U.S. since the coronavirus pandemic began in late December, there are now many people who have recovered from COVID-19. At the same, there have been reports of people who continue to have long-term side effects from the infection. I am a professor and physician and I specialize in infectious diseases of adults. I not only care for patients with bacterial, parasitic and viral infections - including COVID-19 – but actively teach and perform research into diseases that infectious pathogens cause.

Here I offer a summary of what is known today about recovering from COVID-19 – and where there are important gaps in our knowledge. Much of this information, which has been gleaned from studies that began after the 2003 SARS outbreak, is important for those recovering and their family and friends who should know what to anticipate.

Confusion or the post-intensive care syndrome

In the most seriously ill patients who receive care in the ICU, there is a substantial risk of delirium. Delirium is characterized by confusion, difficulty in paying attention, reduced awareness of person, place and time, and even the inability to interact with others.

Delirium is not a specific complication of COVID-19 but unfortunately is a common complication of ICU care. Risk factors in addition to being in the ICU include advanced age and pre-existing illness. Some studies say as many as 75% of patients treated in the ICU experience delirium. The problem is not only with confusion during the hospitalization, but for months after. For example, at three and nine months after discharge many of those who recovered still had difficulty with short-term memory, the ability to comprehend written and spoken words and to learn new things. Some even had difficulty knowing where they were and what today’s date was. And, executive function scores were significantly worse in those who had suffered from delirium.

Physicians are dedicating considerable effort to reduce delirium in patients in the ICU. Approaches that may help include reducing the use of sedatives, repeated reorientation of the patient to date, time and location, early mobilization, noise reduction and cognitive stimulation.

Lungs – will there be chronic shortness of breath?

The most severely ill patients with COVID-19 often suffer from pneumonia and acute respiratory distress syndrome, or ARDS, while ill. Doctors have not followed patients who have recovered from the new coronavirus long enough to know if there will be long-term problems with breathing.

However, a study of health care workers in China who contracted SARS, caused by the SARS-CoV coronavirus which circulated during the 2003 outbreak, are reassuring. Lung damage (measured by interstitial changes seen on CT scans of the lung and pulmonary function test results) mostly healed within two years after the illness.

Most patients with COVID-19 experience a loss of taste and or smell. Only a quarter of patients had noted some improvement in a week’s time, but by 10 days most patients had recovered.

While again it may be too early to tell, in the case of the original SARS outbreak almost half of survivors interviewed more than three years after recovery complained of fatigue.

The Centers for Disease Control and Prevention criteria for diagnosis of the chronic fatigue syndrome were met in a quarter of COVID-19 patients. It will likely be important to target mental health interventions to COVID-19 survivors to help them deal with a prolonged convalescence characterized by fatigue.

Blood clots may arise in up to a fourth of critically ill COVID-19 patients. Blood clots can cause serious long-term complications if the clots break loose from blood vessels and migrate to the lung and cause a pulmonary embolism or go to the brain and cause a stroke.

To prevent blot clots, physicians are now instituting blood thinners prophylactically when there is a rise in the concentration of the D-dimer, which is a fragment of fibrin – a protein that makes blood clot.

In one study, inflammation of the heart muscle, called myocarditis or cardiomyopathy, was observed in a third of severely ill COVID-19 patients. Arrhythmias – an irregular heartbeat – are also seen. It is not known if this is due to direct infection of the heart or secondary to the stress caused by the inflammatory response to this infection.

Most importantly, the long-term consequences in survivors are not understood.

Diabetics are at increased risk of severe COVID-19, which may in part be attributable to an overreaction from immune response to the infection.

But the COVID-19 and diabetes interaction may go in the other direction as well. Elevations in glucose are seen in severe cases of COVID-19 in some patients who do not have a prior history of diabetes. Because the virus interacts with the angiotensin-converting enzyme 2, or ACE2, on human cells, it is plausible that changes in ACE2 activity could be one cause of diabetes in patients with the new coronavirus. In any case, it will be important long-term to follow up.

The bottom line is that the new coronavirus infection has profound effects on many different organ systems in the body. The good news is that we expect that the damage caused by COVID-19 will heal in the vast majority of patients. However, it is important to appreciate that some long-term conditions can be anticipated, and prevented or managed to benefit patients.

[Expertise in your inbox. Sign up for The Conversation’s newsletter and get expert takes on today’s news, every day.]

William Petri receives funding from the NIH and the Bill and Melinda Gates Foundation.

Face masks that do double duty — from hydrating to high style

Now that protective face coverings have become part of everyday life, the choices are endless.

Public bathrooms are risky during the pandemic. These safety tips can help

Bathrooms — especially communal ones — are the perfect storm of shared spaces, poor ventilation, and floating aerosols that can make us sick.

If you’re building a home gym, here are six must-haves that won’t bust your budget.

Nye's videos have been viewed over seven million times since he posted them.

Diabetes was the seventh leading cause of death in 2016, according to the World Health Organization, and is a "major cause of blindness, kidney failure, heart attacks, stroke and lower limb amputation."

A garment manufacturer in downtown Los Angeles with over 300 confirmed coronavirus cases among employees has been ordered closed after an investigation into the deaths of four workers, county health officials said Friday.

This is the first time that doctors in Italy have successfully separated conjoined twins in total posterior craniopagus, which means they shared a skull and a majority of blood vessels. The operation lasted 18 hours.

Three Arizona teachers who shared a classroom got coronavirus. One of them died

Three teachers who shared a summer classroom at a school in Arizona all contracted coronavirus last month, leaving one of them dead.

Could Trump’s Push To Undo The ACA Cause Problems For COVID Survivors? Biden Thinks So.

The speech by the presumtive Democrat presidential nominee was delivered the same day the Trump administration reaffirmed its support of a lawsuit that would invalidate all of the Affordable Care Act, including the law's preexisting condition protections.

Lower back pain episodes are common among adults, with about 80% of adults experiencing lower back pain at some point during their lives.

Burnett: Fauci opens his mouth with facts, Trump does not

Urgent calls for Trump administration to help with COVID-19 supplies

Urgent calls for Trump administration to help with COVID-19 supplies

Fauci: We haven't even begun to see the end of Covid-19

Fauci: We haven't even begun to see the end of Covid-19