The atmosphere at the 2021 Consumer Electronics Show, held virtually due to the pandemic, struck a different tone than in years past. Without hordes of tech-hungry onlookers jockeying for position through packed convention center halls, automakers appeared more reserved in their proclamations for the future.

Several high-profile exhibitors — such as Ford, Honda and Toyota — opted to sit out this year.

The automakers that did present focused on advanced infotainment systems and electric vehicles, some of which you’ll be able to see on dealer lots this year.

Here are some of the top car tech features Edmunds’ experts saw at CES 2021.

At CES, luxury automaker Audi showed a near-final prototype of its upcoming e-tron GT electric vehicle. The e-tron GT will be a sleeker, sportier sedan version of Audi’s current e-tron Sportback SUV, with an estimated range of more than 200 miles.

The e-tron GT should be just as smooth as it is fast, with a comfortable cruising mode that operates in near silence, and a dynamic performance mode using an adaptive suspension and four-wheel steering. The interior can be ordered as leather-free, with cabin materials including recycled plastics and microfibers. Audi will unveil the production version later in 2021. Expect it to compete against rivals such as the Porsche Taycan and Tesla Model S.

Twenty years after the introduction of its pioneering iDrive infotainment system, BMW teased a sweeping update to the software to be fully unveiled later this year. The luxury automaker promised further integration of the system’s current features — such as intelligent voice-activated controls and remote software upgrades — as well as new ones.

The new iDrive promises greater access to services from the digital cloud, plus increased awareness of the vehicle’s physical surroundings. It will recognize hazard warnings from other BMW vehicles on the road, predict the availability of parking spaces in certain situations, and enhance automated parking capabilities. The upcoming BMW iX electric crossover, expected to go into production in 2022, will be the first vehicle equipped with the updated iDrive system.

Automakers have been racing to catch up with Tesla when it comes to large, splashy infotainment touchscreens. With the CES launch of its new MBUX Hyperscreen, a 56-inch digital display stretched across the entire dashboard without any dials or buttons, Mercedes has firmly set a new standard.

The MBUX Hyperscreen builds upon the MBUX system in current Mercedes models with a larger surface and new user interface that aims to make it easier to use. It will debut on the upcoming EQS electric crossover as an optional feature. The real splash will come in a few short years when the Hyperscreen is available on standard Mercedes sedans and SUVs.

The automaker behind brands such as Jeep, Dodge and Ram revealed new additions to its Uconnect Market services and the Uconnect 5 infotainment system. For instance, in one of the most topical announcements at CES, drivers will now be able to place Grubhub orders for contactless pickup through the Uconnect Market.

The Android-based Uconnect 5 system will make its way into new vehicles later this year. Among them are the recently unveiled Jeep Compass and Grand Cherokee L, plus the Chrysler Pacifica minivan. Key features include faster processing, support for higher-resolution screens, enhanced voice control, and wireless capability for both Apple CarPlay and Android Auto.

In a wide-ranging keynote presentation that addressed everything from the practical to the fantastical — a single-seat drone aircraft was shown in a concept video — General Motors outlined its plans to accelerate the production of electric vehicles across a full spectrum of brands.

The automaker plans to introduce 30 new electric vehicles globally by 2025, including an update to its Chevrolet Bolt hatchback and a larger crossover version as well. The Cadillac Lyriq is an electric crossover with a 33-inch digital display and the futuristic Celestiq will offer a full glass roof. Eventually, the battery-powered platform will be applied to everything from performance cars to full-size pickup trucks, the company said. 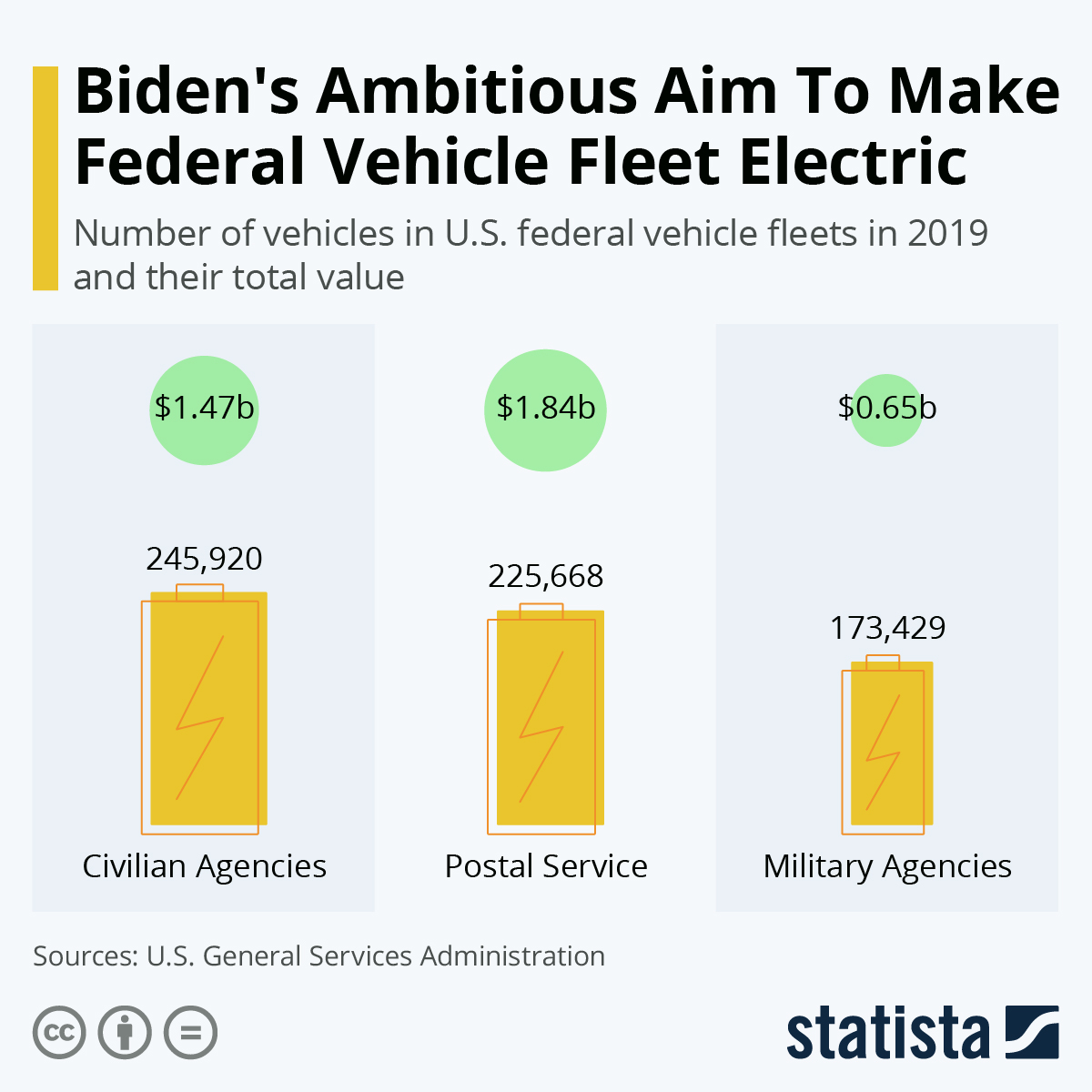 You will find more infographics at Statista

Trends at the virtual 2021 CES gadget conference included COVID-related robots, more uses for 5G technology, AI infused in everything, and TVs that can bend.

Technology to battle the coronavirus is big on the virtual show floor this year. Several companies are showcasing disinfecting robots. LG is introducing an autonomous UV-C light robot designed to irradiate viruses on heavily touched surfaces. (Largely unmentioned is the fact that COVID is largely transmitted by airborne vapor droplets, not viral smears on surfaces.)

To that end, LG is promoting a wearable air purifier and a portable air purifier that you can use to purify air in a car or office. They both have fans and HEPA filters. A smaller company called AirPop debuted the Active+ Smart Mask, which monitors your breathing and the quality of the air around you.

Meanwhile, several companies are offering “touchless" appliances and fixtures. Kohler and Toto are showcasing touchless sinks and toilets that automatically turn on and off or open and flush by waving your hand in front of a sensor or using a voice assistant.

Each year, big TV makers display the dazzling technology that could eventually come to your home TV set, though generally not soon.

In addition to the yearly crop of ever-bigger, brighter and sharper TVs, LG Display is showing off a “smart bed" that includes a 55-inch transparent TV that rises from the bed frame. Another version of the transparent TV is designed for restaurants, so customers could browse the menu and watch a chef prepare food behind it at the same time.

LG has also announced a bendable version of a 48-inch display that can curve on demand — a feature designed for gamers.

Verizon Chairman and CEO Hans Vestberg delivered the CES 2021 kickoff keynote all about 5G and what it can offer for telemedicine, distance learning, and other uses. He gave examples of projects Verizon has been working on, including virtual tours of Smithsonian exhibits, virtual reality science lessons for students, and drone deliveries by a UPS pilot program of medicine and other deliveries, all powered by Verizon's 5G network.

On the last day of CES, Samsung will debut its new 5G enabled iteration of its Samsung Galaxy phone — an event that isn't affiliated with CES but still likely to draw buzz. In between, expect plenty of demos and panels about uses for 5G in phones and beyond, such as in cars and smart cities.

Many of us have now had almost a year of experience adjusting our home office setup and are painfully aware what works and what doesn't.

Companies are touting devices and accessories to improve working from home and help make people more productive. For example, Dell is offering a video-conferencing friendly monitor that is easy to adjust and swivel to get the optimum angle for video calls, complete with a high resolution webcam.

A company called Shure is promoting a microphone for the home office designed to enhance speech audio quality for video conferencing.

And Targus is offering a suite of products for remote or hybrid work: a UV-C LED light that sits on your desk to disinfect electronics, an antimicrobial backpack to carry around work tablets and laptops, a tablet cradle workstation and a universal phone dock.

CES is a major showcase for the newest in electric cars and autonomous vehicles.

GM CEO Mary Barra delivered a keynote Tuesday on the future of its car brands and electric vehicles.

Mercedes-Benz is showing off its AI-infused “Hyperscreen," a display that extends across the entire width of the dashboard. It can be voice-activated and lets the driver and front seat passenger do everything from make calls to activate a seat massage.

Fiat-Chrysler is offering interactive, three-dimensional virtual tours of its cars and technology. It also worked with Google to create an augmented reality model of its Jeep Wrangler 4xe hybrid you can see on your phone.

Cities that spend the most on residential construction

Here's how to stop being such a people pleaser

Here's how to stop being such a people pleaser

How to invest your tax refund wisely

How to invest your tax refund wisely

4 tips to find the best towing vehicle for your needs

You might be thinking about hitting the road with an SUV or truck and pulling a trailer. Here's what to consider when seeking the right towing vehicle.

How Much Car Insurance Do You Really Need?

Choosing the right amount of car insurance can be tricky. While your state probably requires some coverage, you may find yourself wondering if it’s enough, or if you should buy…