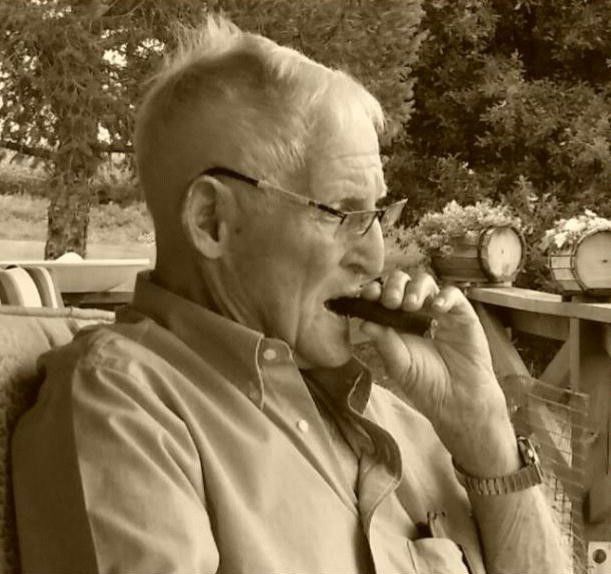 If you have walked beside me throughout my life, we have shared this wonderful world thru each other’s eyes: Born on February 11, 1925 Tim Wollerton Spahr crossed peacefully on July 11th, 2020 in his home, knowing that he was loved. A lifetime resident of Carlisle, Tim was the son of Edward Spahr and Della Marie Roney. Tim was the devoted husband to Ruth Margaret Sykes for 35 years.

Ninety-five years young, Tim truly had a zest for life and appreciated the value of his years. Rarely without a cigar in hand and his faithful companion Tip by his side, Tim always welcomed family and friends with a “How you doin’?” and a hearty laugh. An outdoor enthusiast, he could often be found walking daily at Opossum Lake. Tim enjoyed fishing—with some of his favorite spots being the Yellow Breeches along the Pine Road and Bonny Brook. Other interests were feeding the ducks at Letort Park, socializing and playing tickets at the VFW, shopping for others more than for himself, or having ice cream at one of his favorite shops. An accomplished electrician and handyman, he was always willing to lend a hand or give advice. He helped numerous family members and friends with their homes, and later went on to help oversee and build his own home with Margie which has beautiful views of the mountains that they enjoyed daily. Tim loved his family and friends and always looked forward to spending time with everyone. He especially enjoyed the holiday season and celebrating with all who stopped by. Tim was an avid storyteller with a quick wit to his wealth of family and friends and he was always willing to have lively banter. Family dinners were a true favorite, especially at the home of his sister Betty.

As a WW2 Naval Veteran, Tim served aboard the USS Gansevoort (DD-608) during the Leyte Gulf War of 1944 and earned many battle stars from extensive combat in the South Pacific. After his active military career, he went on to work at the Navy Depot as an electrician until retirement. Soon after deciding retirement came too early, he worked at Dickinson College in maintenance and as a groundskeeper, until he thought traveling and playing poker might be his next adventure. Those trips included Mississippi and the Bahamas with his many friends from the VFW Carlisle Post 477. Everyone who knew Tim would be quick to notice that he was not a man willing to slow down, or let one moment pass him by, even into his later years.

In addition to his devoted wife of 35 years, Margie, Tim is survived by many who truly loved him: Sister, Betty Nickey of Carlisle, daughter Bonnie Gross of Whitehall, PA, son Tim (Elizabeth) of Kennebunk, ME, son Scott of Rehoboth, DE, daughter Beth of Shillington, PA. Additionally, Tim was loved and cared for by his niece, Debra Nickey of Carlisle, cherished by granddaughters Shana Kremus (Dan) of Allentown, PA and Emily Sabey (Matthew) of Seattle, WA, and great-granddaughter, Melina Grace who loved holding his hand. He was preceded in death by his parents and his brother Charles.

On July 20, 2020 Tim received military funeral honors in a private service. Tim had a charitable spirit, and as a family, we ask that donations be made to Masonic Children’s Home, One Masonic Drive, Elizabethtown PA 17022 (children@masonicvillages.org) in lieu of flowers. Tim has rejoined his mother, who he loved dearly, in his final resting place with her at Westminister Cemetery. He will be remembered as a unique spirit who left a special imprint on all that knew him. Tim will be missed beyond measure. Arrangements have been entrusted to the Hoffman Funeral Home and Crematory 2020 W. Trindle Rd., Carlisle. To sign the guestbook, please visit www.Hoffmanfh.com