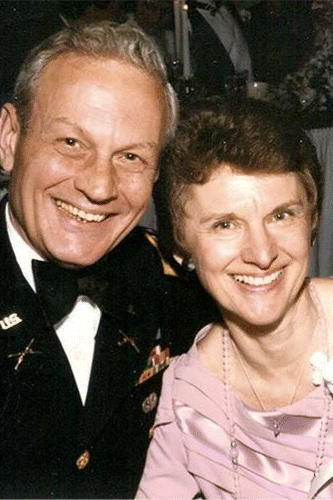 Carol received her primary education at Holy Angels School in Aurora and secondary education at the former Madonna High School (which now houses the Fred Rodgers Magnet School). She received a Bachelor of Science Degree in Nursing from the College of Saint Teresa, a Catholic women’s college in Winona, MN; and kept her RN license current until April 2018. Carol’s work experience in the nursing field was concentrated in psychiatry, and she was employed at Chicago State Hospital. After an event-filled career as an Army Wife stationed across the U.S. and overseas, she continued her caring and compassionate work for another 30 years as a counselor and then President of Birthright—Central Pennsylvania (now the Carlisle Area Family Life Center) in Carlisle, PA; at which time she tried to retire but continued to volunteer for years, out of love for the many young women she counseled and the wonderful babies they had during her tenure.

Carol was a devout Roman Catholic who served her church in many capacities. She usually attended daily Mass in Carlisle, practiced weekly Eucharistic Adoration in the presence of the Blessed Sacrament, prayed the Rosary frequently, and served for years as an Extraordinary Minister of Holy Communion. Carol and her husband Ed were devoted appointed teachers for the Right of Christian Initiation of Adults (RCIA) program at St. Patrick’s Parish in Carlisle, PA for over 20 years, where they sponsored and instructed many candidates and catechumens in their faith journeys. In addition to her amazing work with the church and community, Carol enjoyed cooking, sewing, driving, biking, swimming, beachcombing, dancing, strawberry-rhubarb pie, strawberry milkshakes—and garage sales!

Please join us at Holy Angels Catholic Church, Lancaster and Hardin, Aurora, IL 60506 on August 1, 2020 for a visitation (10:00am) and Mass of Christian Burial (11:00am). If you are unable to attend and wish to share in this special occasion, the service will be livestreamed and available for 90 days at the following link: https://client.tribucast.com/tcid/21067732

In lieu of flowers, memorial contributions may be made to one of the following: Carlisle Area Family Life Center, 155 N. Hanover St., Carlisle, PA 17013 or The Association for Frontotemporal Degeneration, 2700 Horizon Drive, Suite 120, King of Prussia, PA, 19406 or theaftd.org/support-aftds-mission/