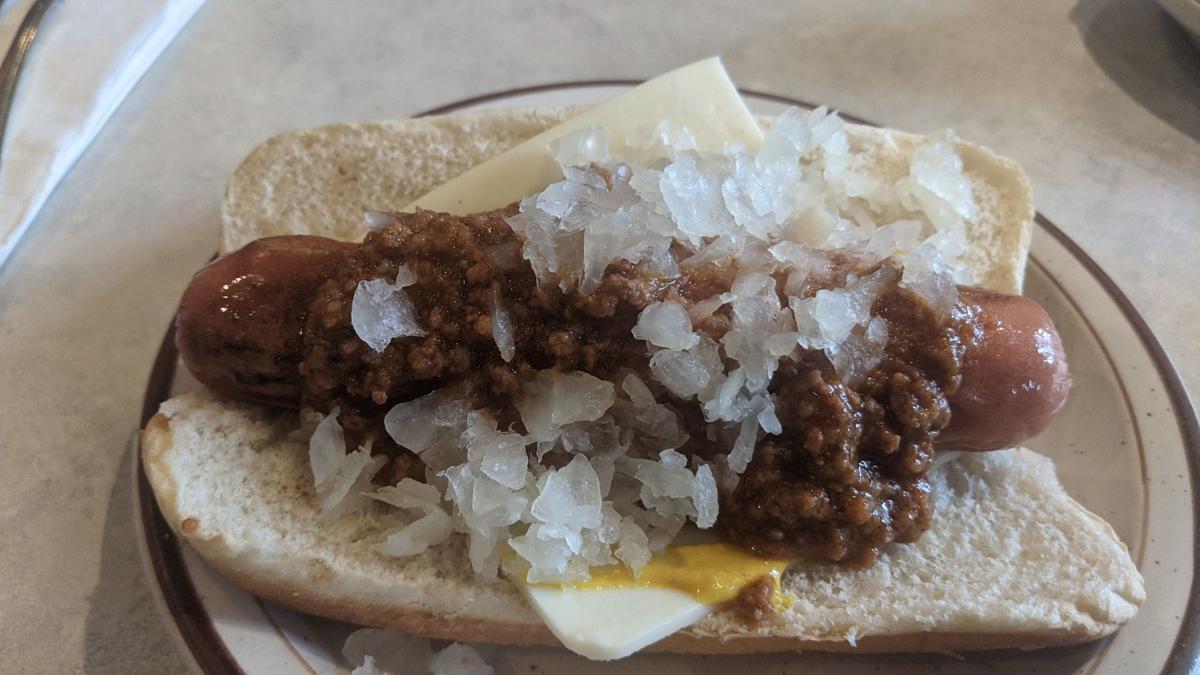 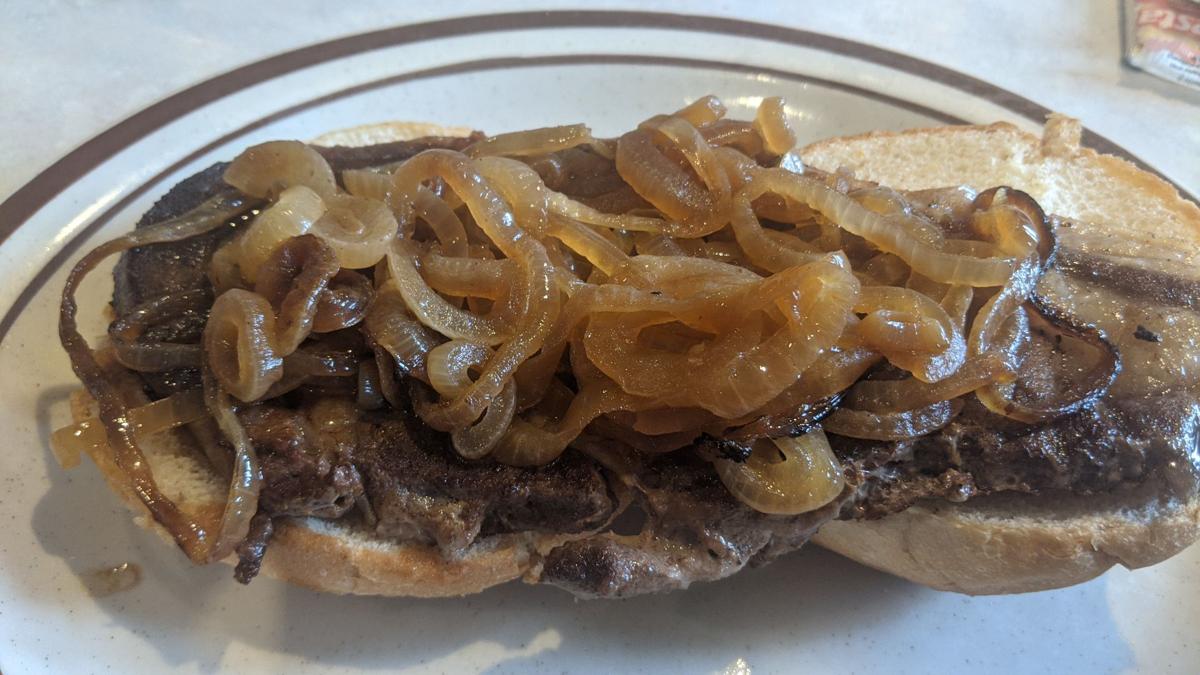 The rib-eye steak sandwich at the Hamilton Restaurant can come with grilled onions on top. 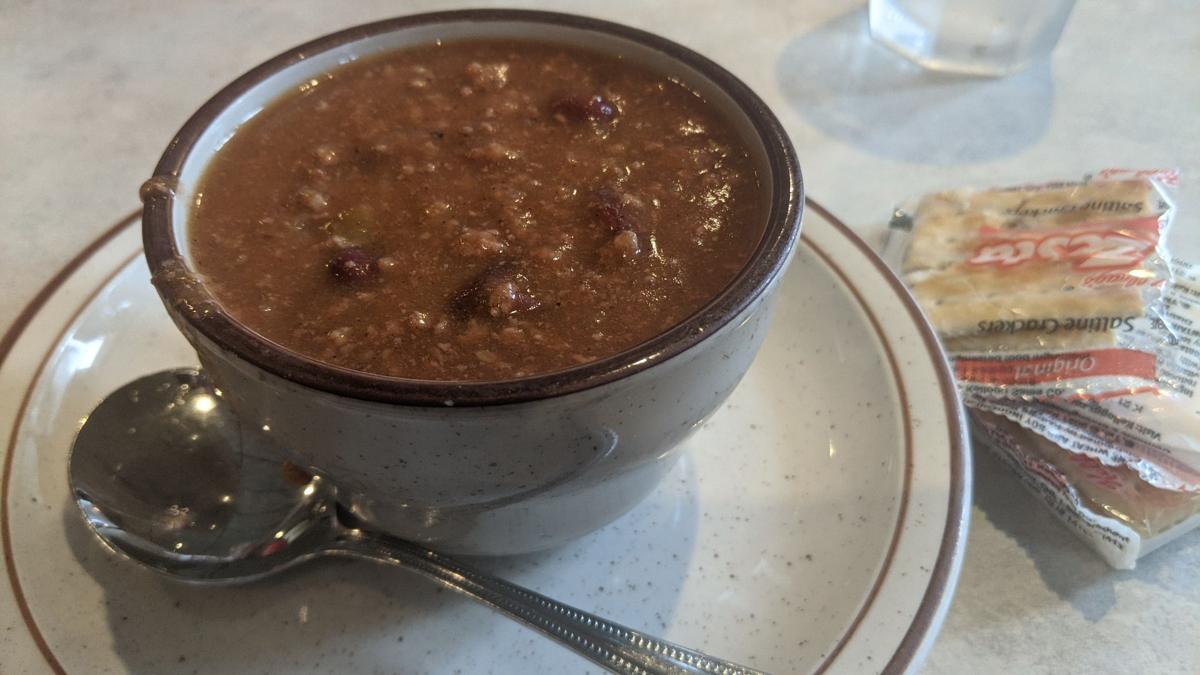 The chili at Hamilton Restaurant is mildly spiced with a slight smoky seasoning.

I’ll never forget when I first learned about the Hot-chee dog. I was reporting for this newspaper on an event sponsored by the Carlisle Area School District. There was great excitement among the students when they learned that the Hamilton Restaurant would be providing Hot-Chee dogs for all participants.

Being clueless, I had the temerity to question the components of a Hot-Chee dog. The incredulity was such that I may have been run out of town on a rail had I lived in a less tolerant time.

So, to clear up any confusion, the Hot-Chee Dog is a chilidog with American cheese, mustard and onions and is so popular that it has earned itself a marker, which now stands proudly outside the Hamilton Restaurant at 55 W. High St. It reads, “Hot-Chee dog, beloved by locals and first served by Greek immigrant Charles Kollas at the Hamilton Restaurant, 1938.”

In an interview in 2014, I asked son John Mazias what keeps business booming. “It operates much the same as it did 40-50 years ago,” he said.

When customers walk through the door, they’ll see a pile of dogs on the flat top on the right and Mazias overseeing operations to ensure that the customers are seated and served promptly. There are two large dining rooms at the Hamilton, and we were led to a roomy, maroon-colored booth located in the first room where all the cooking is done.

Not long after we were seated, a friendly waitress with a welcoming smile greeted us and took our drink order. I mentioned that I thought I saw her at the Hideaway months ago and she laughed, “That’s my sister,” she informed me before we got down to business.

Sandwiches come with a cole slaw and fries, and my husband had his heart set on not one, but two. The Hot-chee dog ($7.50) was a no-brainer. To that he added a cheeseburger ($8) and a cup of chili. I thought the rib-eye steak sandwich sounded good and when I was offered grilled onions on top, I went for it.

There are additional hot sandwiches with ingredients like turkey, ham, beef, fried oysters, grilled cheese and meatloaf, along with cold sandwiches, which run the gamut, from the old-school egg salad, to BLTs, and the always popular crab cake sandwich.

A selection of salads includes Greek, chef’s, tossed and others topped with various proteins like shrimp, steak and chicken.

Seafood favorites, including haddock, crab cakes, shrimp, oysters and scallops, are served alongside homespun and hearty selections like roast turkey (carved) with gravy, chicken and waffles, lamb chops and the nostalgia-invoking liver and onions. I’d be remiss not to note that the Mazias family takes pride in making everything from scratch, from gravies to soups.

Our meals arrived in a timely manner, which I’d estimate was around 15 minutes — something I certainly don’t take for granted these days; just this weekend I waited 40 minutes for lunch at a restaurant in Maryland.

The chili was meaty and mildly spiced, with a slightly smoky seasoning that I couldn’t quite identify but loved. It added a certain je ne sais quoi to the chili that also tasted great on the yummy Hot-Chee Dog. (Tell that to a chef at a fancy French restaurant.)

My husband said that he also enjoyed his cheeseburger, topped with a garden-fresh tomato. My ribeye steak sandwich was tender and delicious, with very little fat that I trimmed off before eating. It was nicely seasoned and is something that I would order again.

Should we have wanted to end our dinner on a sweet note, we could have chosen from rice pudding or a selection of sundaes and pies.

In keeping with their “old-school” reputation, the Hamilton is a cash-only restaurant, so be sure to keep that in mind when you visit. For tried-and-true standards and friendly, efficient service, I can understand why this local landmark is a beloved eatery that has been making customers happy for decades.

Next Up: CJ’s American Pub & Grill in Shippensburg

Discerning Diner: Sunrise Cafe in Carlisle serves up unique sandwiches in building that is anything but run of the mill

"When we entered, we were impressed with the attractive décor, from the soaring windows, to the beautiful hardwood floors, the exposed brick and original stone, the cheery yellow paint and the original fireplaces."

As we perused the menu, we first saw a list of “munchies,” like breaded mushrooms and pierogies served the way I like them (with butter and sour cream).

Disney projects an $8 billion increase in its 2022 content budget

Disney projects an $8 billion increase in its 2022 content budget

The rib-eye steak sandwich at the Hamilton Restaurant can come with grilled onions on top.

The chili at Hamilton Restaurant is mildly spiced with a slight smoky seasoning.