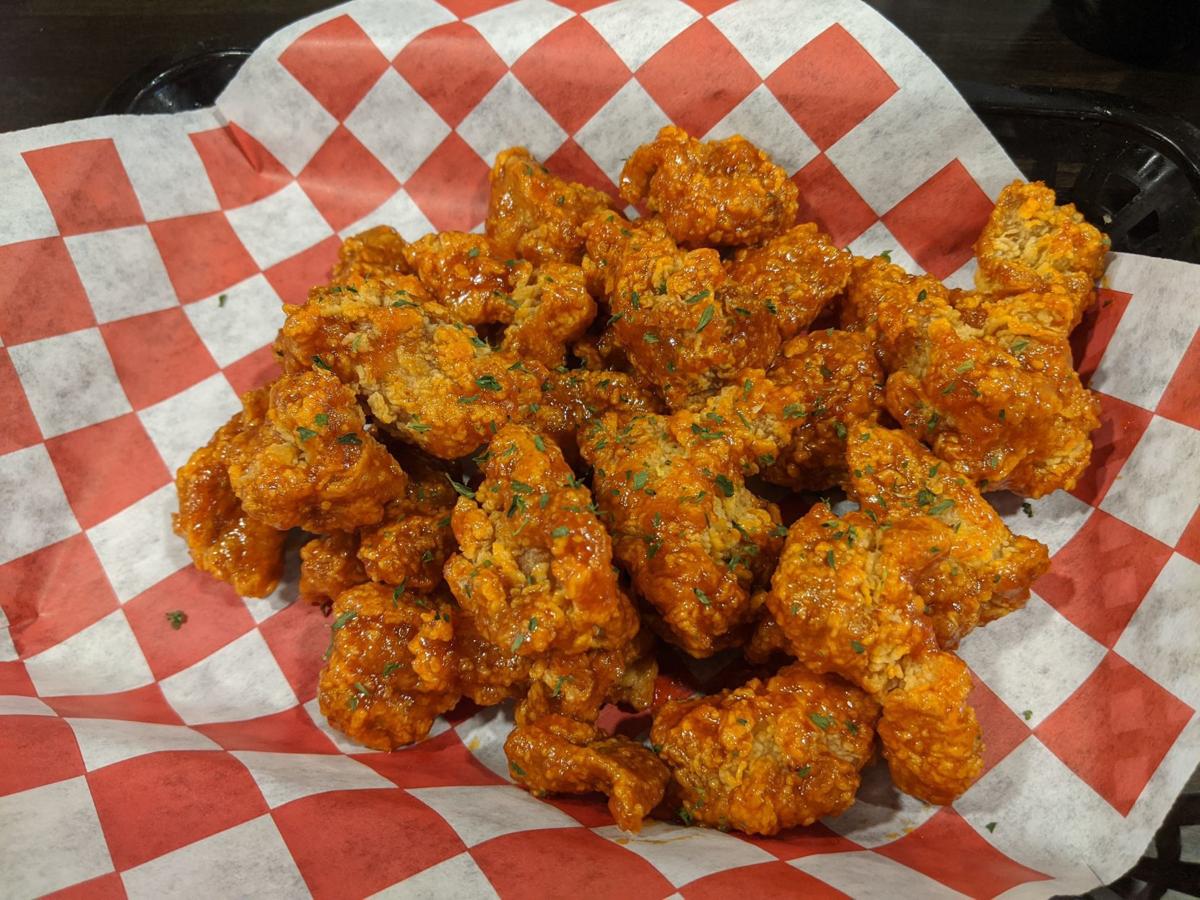 One of The Koop's specialties is its fried chicken that comes with various sauces incorporated into it, including the sweet and spicy sauce. 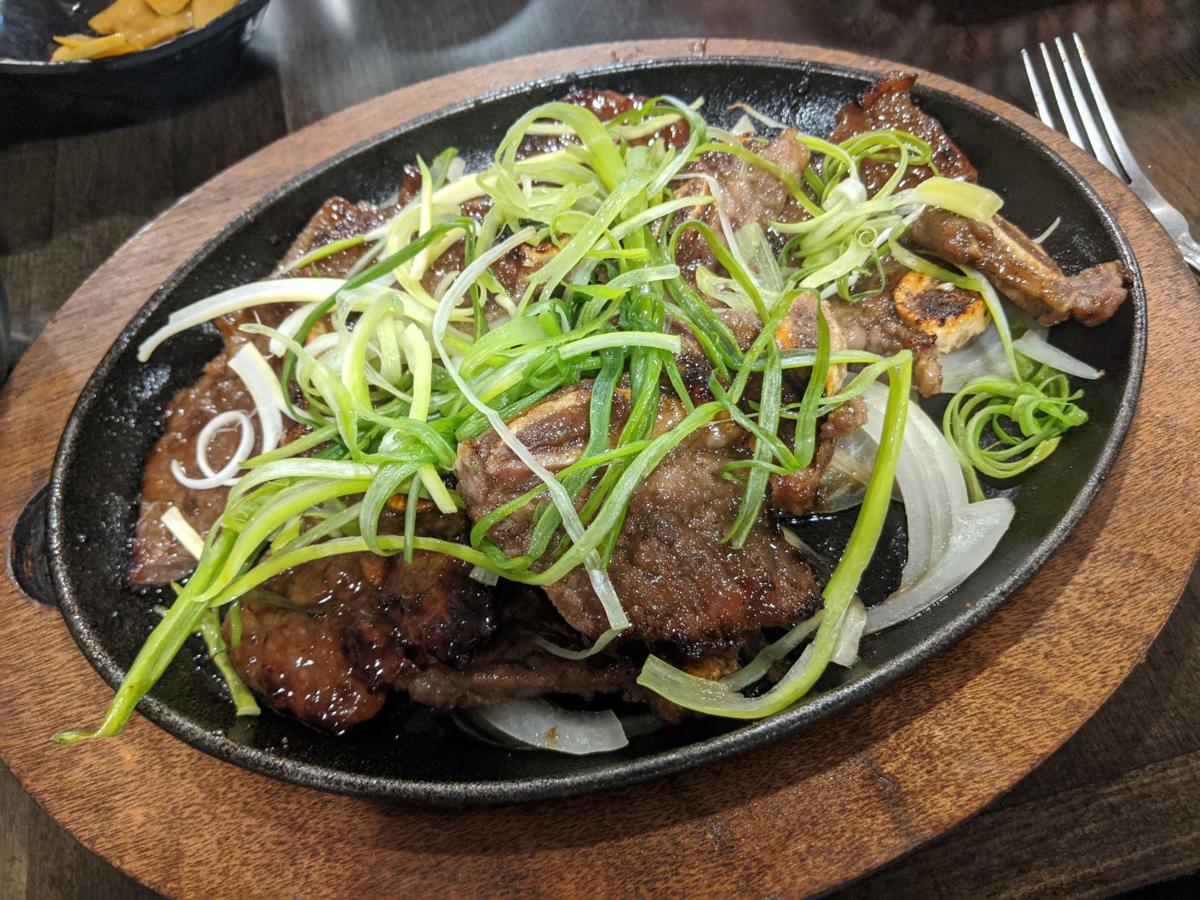 The Koop offers Korean dishes, including Galbi, made of marinated short ribs.

I learned about The Koop while driving down Market Street one day and spotted a sign advertising the Korean eatery in Camp Hill. I usually try to keep my finger on the pulse of what’s happening with restaurants in the area, but this place had flown beneath my radar. The BYOB appears to have opened with little fanfare on 5 S. 35th St., where the Spring Garden restaurant used to be.

When my friend and I arrived last Friday around noon, we were promptly greeted, seated and offered drinks. My friend opted for water, while I chose hot tea, which hit the spot on a chilly day. The gentleman who waited on us also presented a chicken wing sample with a dipping sauce, which I concluded was the soy garlic listed on the menu.

Discerning Diner: Dockside Willie's is back and better than ever

The Koop is a bit of a “no frills” place, with about a dozen tables in the front room and several in an adjacent room that appeared to be used for storage when we visited. Slate gray walls festooned with mountain scenes pay homage to the owner’s ties to the Korean Alpine Rescue and a corner is dedicated to artifacts related to mountain climbing.

Judging by the majority of orders that came out of the kitchen that day, I am assuming that the Korean Fried Chicken is the most popular dish. Diners can order a whole, cut-up chicken, wings, drumsticks or boneless, with a choice of dipping sauce for a $1 or $2 add-on charge. The five sauces available are soy garlic, honey garlic, spicy soy garlic, sweet and spicy, and extra spicy.

Additional specialties listed on the relatively small menu include appetizers like Haemul Pajeon, a Korean seafood pancake with green onion, and fried dumplings stuffed with vegetables. A selection of eight soups include vegetarian options like the “Hangover Ramen” served with scallions, carrots and egg, and the tofu stew with vegetables. Dduk Guk, otherwise known as “rice cake soup,” served with egg, marinated beef and seaweed is yet another option.

Other Koop specialties include a chicken stew described on the menu as a “whole chicken cut up in pieces in our homemade stock, served with vegetables, dipping sauce and noodles.” This is one dish that I would have liked to set eyes on due to the cost alone. At $38.99, I couldn’t help but marvel at the price and wonder if it might feed an entire family. Also available under “Koop Specialties” are braised pig trotters and the popular Korean dish Bibimbap, comprised of a combination of rice mixed with vegetables and meat and topped with a fried egg.

Discerning Diner: Business is brisk at Market in Hampden Township

A total of eight rice dishes round out the menu and contain ingredients like marinated beef, pork, pork belly and short ribs.

My friend chose a dish known as Galbi featuring marinated short ribs ($21.95), and I opted for the “small” order of the boneless fried chicken ($10.95) with a sweet and spicy dipping sauce. Diners can choose white rice, pickled radish or a side salad to accompany their chicken, so I chose the salad.

Our orders arrived in about 15 minutes and the waitress who served our food laughed when I informed her that I had ordered a “small” order of fried chicken. “That is small,” she said referring to the dish that contained at least 15 pieces of chicken. I assume they must get that reaction a lot.

The modest salad that accompanied the chicken was a combination of iceberg lettuce, carrot shavings, tomatoes and a dressing that tasted like Thousand Island.

My friend’s ribs were served with sides of pickled chayote, kimchi and pickled bean sprouts. Being unfamiliar with chayote, we were both eager to try it and found it to be tasty and crisp, with a texture reminiscent of a water chestnut. The spicy kimchi was also very good.

My friend encountered a bit of trouble when he was presented with thin-pounded short ribs that weren’t quite tender enough to eat sans a steak knife. When he sought out the waitress, she returned with a butter knife, which wasn’t quite up for the job, so he spent most of the time struggling with the meat, which tasted of brown sugar and soy sauce and was topped with fresh scallions.

The standout between the two meals was the fried chicken, which was hot, crispy and delicious. The sweet and spicy dipping sauce, which I expected to be served on the side, was incorporated into the dish instead. I was looking forward to spicy chicken, but it tasted more of sweet notes than spicy. If I return, I will try the spicy soy garlic, which seems to rate rave reviews from Yelpers.

Those seeking out delicious fried chicken for lunch or dinner should give The Koop a try. My advice: research the dishes beforehand rather than relying solely on the menu, which is a bit short on details. If you’re new to Korean food, you can certainly expect a unique culinary experience.

Next Up: Dinner at Desperate Times Brewery in Carlisle.

Cumberland County’s beverage scene has exploded in recent years. Breweries, in particular, are doing quite well, with the county ranking numbe…

Discerning Diner: Fresh food, made from scratch at Stevie's Bistro in Camp Hill

The Camp Hill community suffered a major loss in July 2018 when fire swept through a neighborhood café located at 2163 Market St., in Camp Hill.

The owners of the fast-casual Mediterranean restaurant’s self-stated goal is to appeal to the workers in the area who seek healthy lunch and dinner choices.

One of The Koop's specialties is its fried chicken that comes with various sauces incorporated into it, including the sweet and spicy sauce.

The Koop offers Korean dishes, including Galbi, made of marinated short ribs.