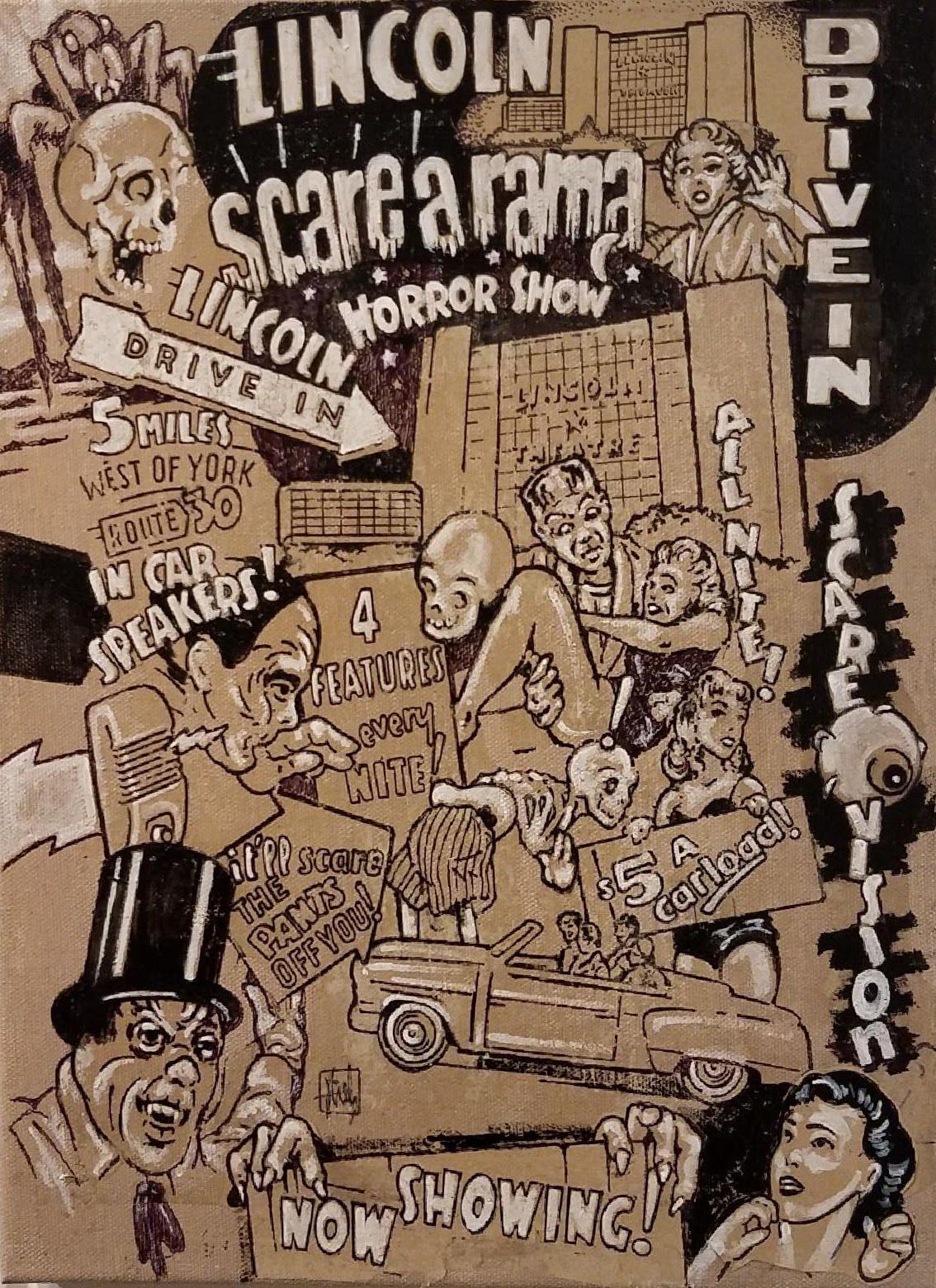 "Lincoln Drive-In" by Jim Hively is on display at Hive artspace during the "Double Feature: B-Movies and Cult Films" exhibit on display until Sept. 27. 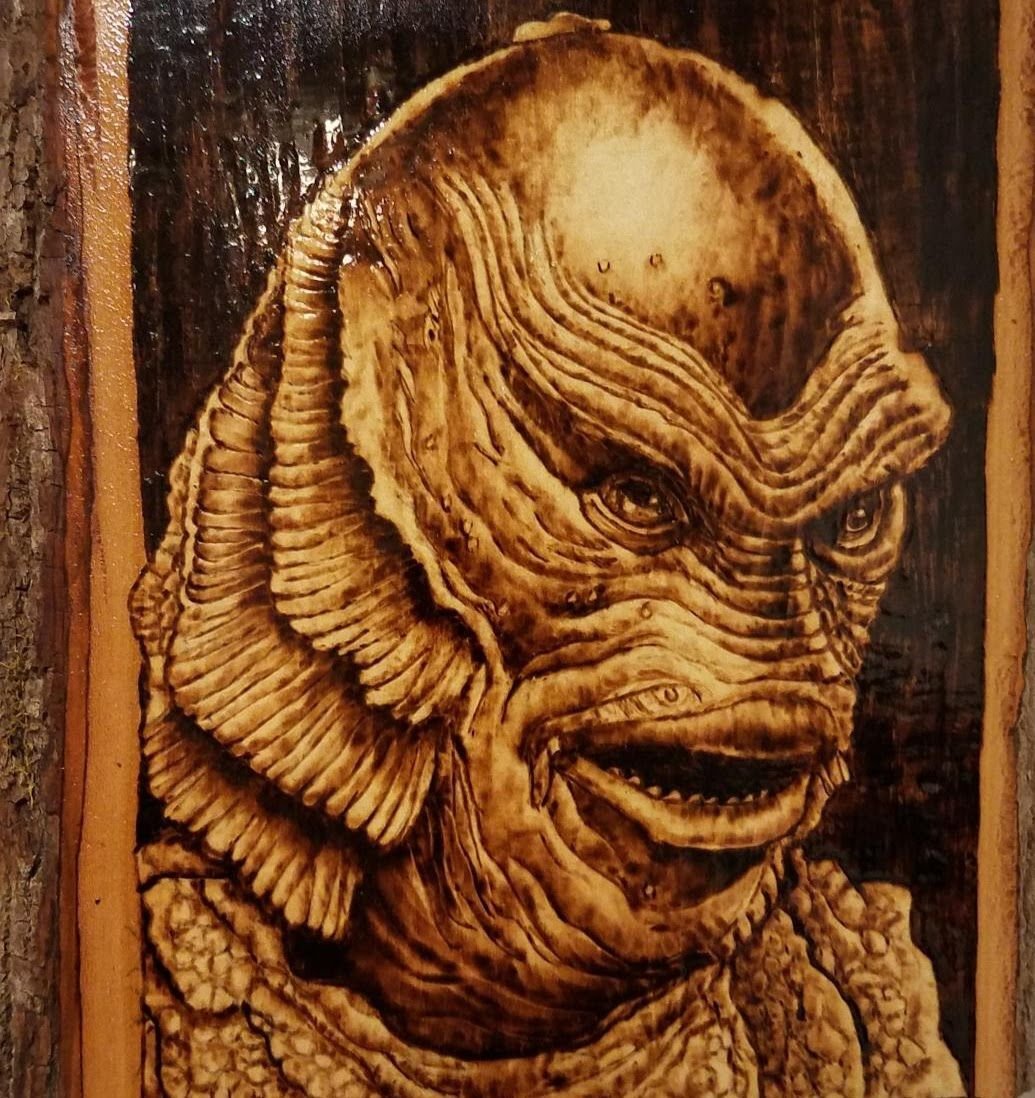 "The Creature" by Daphne Watts is on display at Hive artspace during the "Double Feature: B-Movies and Cult Films" exhibit on display until Sept. 27.

Joseph and Barrie Ann George For The Sentinel

During the pandemic, many of our favorite cultural activities slipped away from us. From gallery visits to date night movies, pursuits we took for granted vanished.

As the pandemic precautions continued, gallerist Susan Scofield of Hive artspace in York thought, “Since we can’t go to the movies these days, we are going to bring the movies to you.”

“Double Feature: B-Movies and Cult Films,” the September exhibit at Hive artspace in York, celebrates not just any cinema, but the underdogs of the cinematic world: B-movies and cult classic films. From campy monsters to “banned” films to movies so bad you just have to love them, this exhibit features more than 50 artworks by more than 20 local, regional and national artists celebrating the highs and the lows of the genre.

B-movies are often films with minimal artistic ambitions or they are lively, energetic films uninhibited by the constraints imposed on more expensive projects and unburdened by the conventions of the “serious” independent film. The term is also now used loosely to refer to some higher-budget, mainstream films with exploitation-style content, usually in genres traditionally associated with the B-movies. These films often have rabid followings who make them cultural touchstones.

Often these films found a home at the classic drive-in movie theaters that dotted the highways of America. Jim Hively celebrates two of the local defunct drive-ins with acrylic on canvas pieces “Stoney Brook Drive-In” and “Lincoln Drive-In.” In these works, Hively embraces the 1940s and ‘50s pulp allure with a poster-like collage of images associated with the era.

B-movies are often associated with monsters and science fiction. “Double Feature” has many notable works that draw these iconic images. Kay Wrenn of York utilizes pen and ink for a series based on nine classic lead characters. Wrenn’s “The Invisible Man” features exquisite line work with a shocking bubblegum pink background.

Daphne Watts likewise celebrates the iconic Creature from the Black Lagoon. Here the piece is crafted from wood with still existent bark by means of pyrography, the technique of burning a design on a surface with a heated metallic point. The ability of the artist to capture detail as well as texture on the surface is visually stunning.

More modern movie examples of this variety can be found in the exhibit, as well. Thomas Webb’s “Swamp Thing 1982” is acrylic ink on watercolor paper whose delicacy belies its dark imagery. Jeremiah Crow’s mixed media piece “Phrenology on Trioxin” captures both the morbid humor and horror of its inspiration, the movie “The Return of the Living Dead.” Wood, acrylic, paper and plastic converge to create a 3D work that has a vintage feel.

Cult classics also play a role in the exhibition. Divine, the star of many a John Waters film, is depicted by St. Bradford in all of her camp glory in “Divinity.” Animal print and bombastic color bring Divine to life in this acrylic on canvas.

Amber Judy celebrates the over-the-top aesthetic of “Repo! The Genetic Opera” with a digital collage titled “Repo!” The cool blue tones give the work a hint of slick, commercial graphic design that barely hints of the sinister nature of the cinematic company that it promotes.

Two of the artists take the imagery associated with the genre into dimensions all their own. Craig Copas draws on classic film posters as a stepping stone into vividly Expressionistic works. In both “Metropolis” and “The Moleman,” the Art Deco and 1950s sci-fi imagery is transformed by bold colors into imagery more reminiscent of Mesoamerican figures. Moreover, a close examination of the works reveals interesting textural elements due to its mixed-media construction.

Jason Herr of Lancaster is a featured artist within the exhibit, with seven of his works showcasing both his individual talent and his relation to the theme. Herr’s works have elements of Robert Williams’ Low Brow Pop Surrealism and the unconventional attributes of Outsider Art. They contain fragments of Pop Culture that are reassembled in disconcerting ways, a visual equivalent of a David Lynch film.

In “Fear Itself,” a 1950s-looking man is tormented by creatures such as bats, snakes and bears. The juxtaposition of order and anxiety feels at home with the underlying tensions that many of these movies touch upon in their stories.

B-movies and cult classic films are integral parts of cinema and are often important elements of the larger popular cultural zeitgeist. “Double Feature: B-Movies and Cult Films” cherishes their unending source of imagery and ideas.

“Double Feature: B-Movies and Cult Films” is on display until Sept. 27. Hive artspace is located at 126 E. King St., York.

Gallery hours are noon to 3 p.m. Friday through Sunday, and otherwise by appointment. Visitors are required to wear protective face coverings and maintain social distancing while visiting the gallery. For more information, visit www.HIVEartspace.com or its Facebook page, or call 917-971-7456.

Joseph George holds a degree in history and art history from Dickinson College. He and his wife, Barrie Ann have spent over 30 years together traveling and visiting art galleries locally and throughout the world. They have been writing about the local art scene for seven years. Their tastes range from fine art to street art.

When I learned that Samra Alic was moving Dalicia Ristorante and Bakery from Midtown Harrisburg to Mechanicsburg, I was eager to give the new spot at 105 S. Market St., a try.

My travels take me to the Mechanicsburg area quite often, but it wasn’t until recently that I noticed a small restaurant by the name of “Track…

Since signing a record deal with Lamon Records in Nashville, Tennessee, last month, the 17-year-old's new single, "Born for a Friday Night," has just been officially released.

"Lincoln Drive-In" by Jim Hively is on display at Hive artspace during the "Double Feature: B-Movies and Cult Films" exhibit on display until Sept. 27.

"The Creature" by Daphne Watts is on display at Hive artspace during the "Double Feature: B-Movies and Cult Films" exhibit on display until Sept. 27.