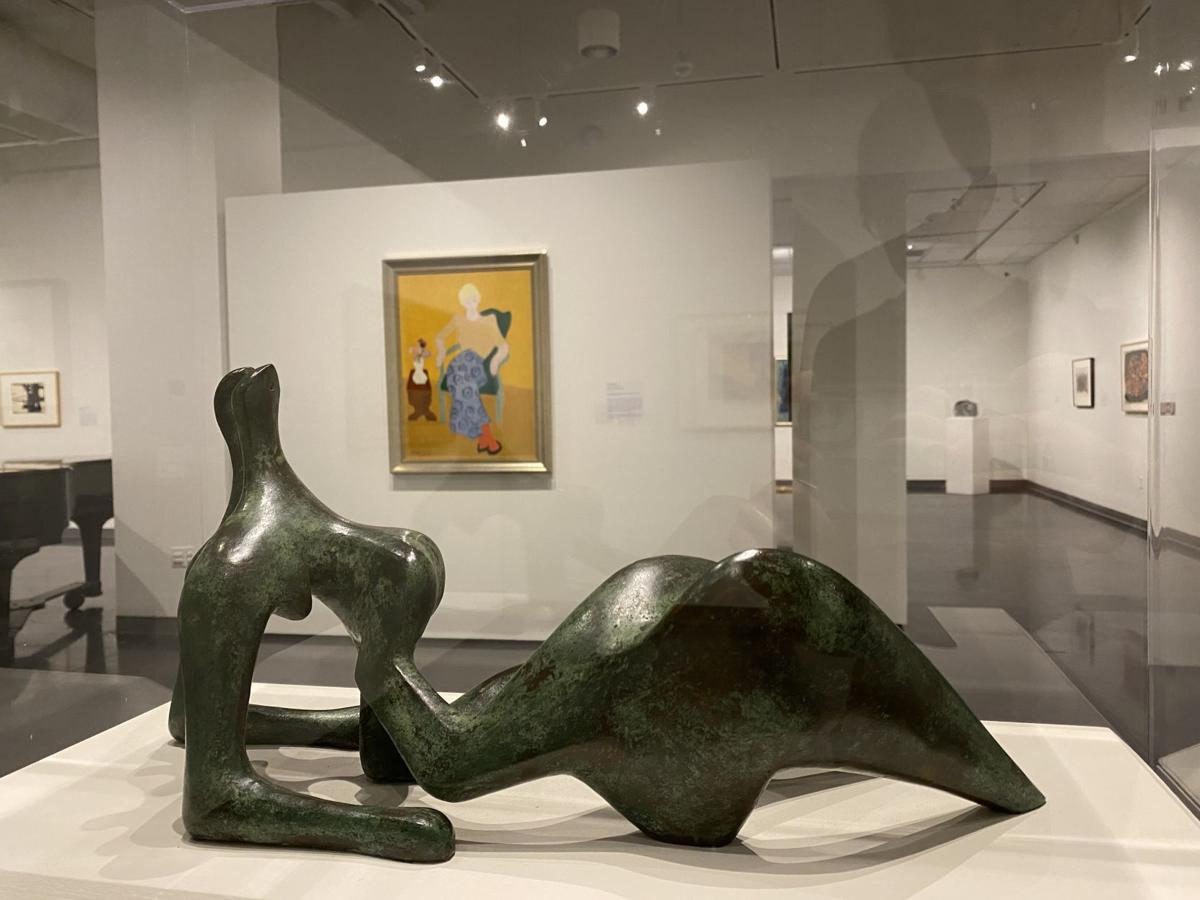 “Reclining Nude” by Henry Moore is part of the exhibition “The Modernists: Witnesses to the 20th Century” at The Susquehanna Art Museum in Harrisburg through Jan. 17, 2021. 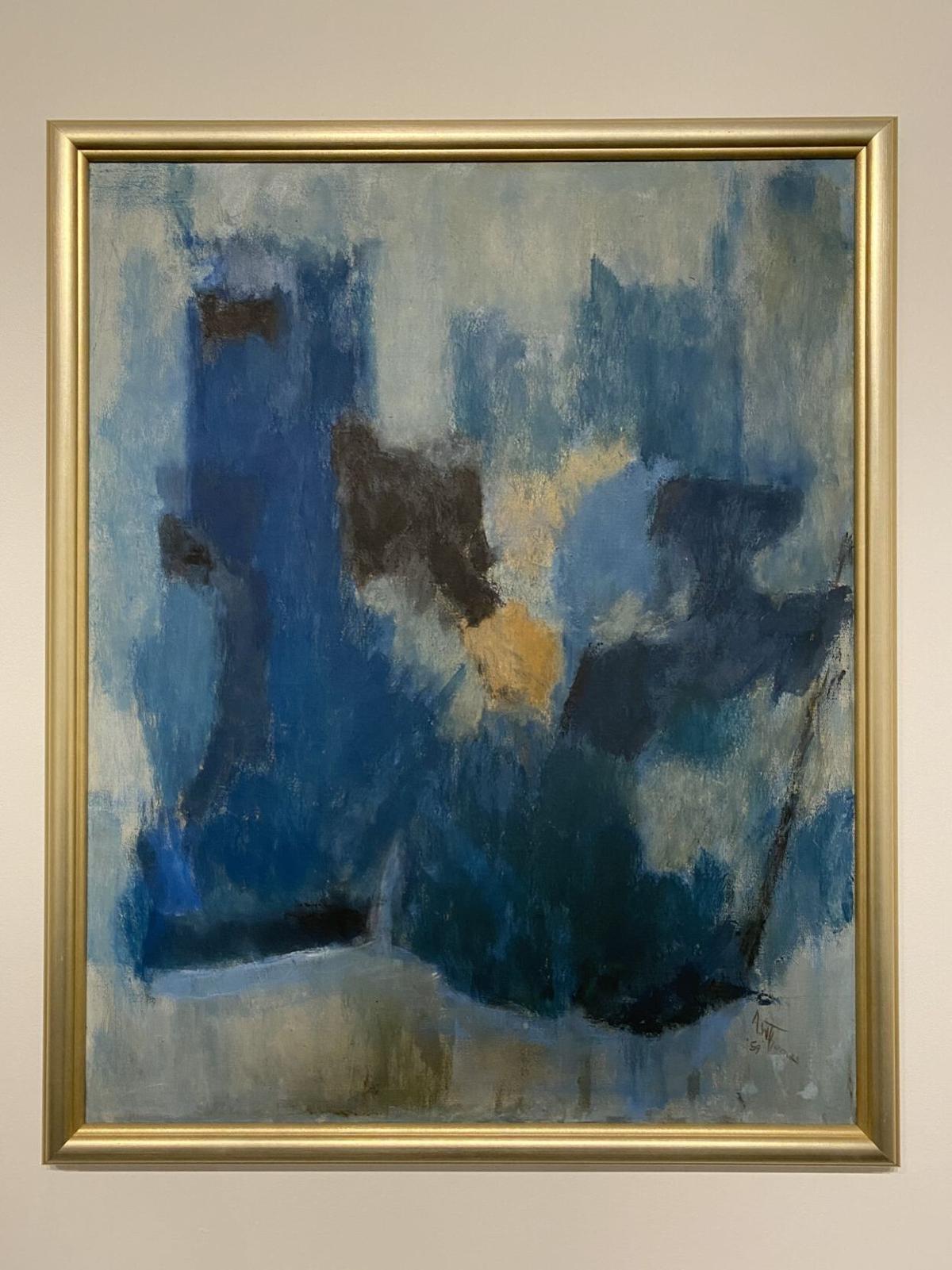 “Blue Abstraction” by Alma Thomas is part of the exhibition “The Modernists: Witnesses to the 20th Century” at The Susquehanna Art Museum in Harrisburg.

Joseph and Barrie Ann George For The Sentinel

During the early to mid-20th century, artists witnessed, documented and even participated in two devastating world wars. The aftermath of the collective trauma the world experienced changed the trajectory of creative culture forever.

As a result, artists rejected the realism favored by their predecessors and experimented with new subjects, techniques and media to portray the world as they saw it. This half-century movement that evolved from realism and moved toward abstraction came to be known as Modernism.

The Susquehanna Art Museum’s current exhibition “The Modernists: Witnesses to the 20th Century” illustrates the development of the aesthetic that resulted as artists broke from long-standing artistic traditions.

Featured works of art by world-renowned artists such as Marc Chagall, Man Ray, Gustav Klimt, N.C. Wyeth and Milton Avery were drawn from museum and private collections across the United States and curated by the Susquehanna Art Museum for this unprecedented exhibition.

Within this one gallery, one can feast on the stylistic cornucopia that encompasses the 20th century. Many techniques and artistic trends can be found within the walls that resulted as a reaction to the conventions of both art and society.

In a period that encompassed both world wars, several pieces are direct reactions to those wars. Julius Bloch’s “War” is a lithograph by an artist who served in World War I. This haunting image of a peasant woman and her child captures the horror of war by simply illustrating her traumatized expression.

Käthe Kollwitz’s “Woman and Death” similarly captures the emotional toll of war in her etching of a woman grasped by a specter of death as a young child reaches for her. Since the artist lost her son in combat, she is able to impart the pain and suffering upon those left behind.

The movement toward Expressionism was also seen in sculpture. Luis Jiménez’s “TV,” a fiberglass sculpture of a television with a human face, was inspired by the avant-garde style typified by the Modernist period. He embraced the tradition of abstracting the human form in his sculptures, stylizing them with references to historic Olmec heads, murals by Diego Rivera and Aztec serpents.

Also on display is Henry Moore’s “Reclining Nude,” a maquette, or small model, in bronze for one of his most significant sculptures, the large “Reclining Figure: Festival,” commissioned for the Festival of Britain held in 1951. He describes, “The Festival Reclining Figure is perhaps my first sculpture where the space and form are completely dependent on and inseparable from each other ... I wanted my sculpture to be truly three-dimensional. In my earliest use of holes in sculpture, the holes were features in themselves. Now the space and the form are so naturally fused that they are one.”

Abstract artwork relied upon the most essential elements of art-color, line, shape and form, to convey emotion, as evidenced by “Reclining Nude.”

The work on exhibit by of the Modernists of the 20th century demonstrates the abundance of ideas that emerged in the era. The departure from realism allowed inspiration to flow purely from the mind of the creative, moving from representing reality to using the elements of art to experiment with new artistic methods and approaches in ways that continues even now and will continue to persist into the future, making it one of the most important points in art history.

This exhibit offers an outstanding opportunity to immerse oneself in this moment, whether as an introduction to Modernism for the novice or a deeper dive into this period of explosive creativity.

“The Modernists: Witnesses to the 20th Century” is on view through Jan. 17, 2021. The Susquehanna Art Museum is open to the public from 10-5 on Tuesdays, 10-7 on Wednesdays, 10-5 on Thursdays through Saturdays, and from 12-5 on Sundays. Susquehanna Art Museum is located at 1401 N. 3rd St., Harrisburg. Free parking is available to museum visitors in the lot behind the Museum at Calder and James Streets.

For more information on visiting the museum, visit susquehannaartmuseum.org.

Joseph George holds a degree in history and art history from Dickinson College. He and his wife, Barrie Ann have spent over 30 years together traveling and visiting art galleries locally and throughout the world. They have been writing about the local art scene for eight years. Their tastes range from fine art to street art.

"What I also learned is that the restaurant accepts cash only and is run by a father and son team who open it on Saturdays and Sundays for breakfast and lunch."

The H. Ric Luhrs Performing Arts Center at Shippensburg University will be digging into the vaults of a local holiday favorite for a virtual show.

Dillsburg author Tracy Pawelski wrote a new book, "One Woman in the Himalayas."

It’s not often that I order a lunch "to go" at the West Shore Farmers Market, but I decided to do just that as part of my column this week.

The Susquehanna Chorale will release a virtual concert of its annual Candlelight Christmas series via a link on its website beginning on Dec. 19.

“Reclining Nude” by Henry Moore is part of the exhibition “The Modernists: Witnesses to the 20th Century” at The Susquehanna Art Museum in Harrisburg through Jan. 17, 2021.

“Blue Abstraction” by Alma Thomas is part of the exhibition “The Modernists: Witnesses to the 20th Century” at The Susquehanna Art Museum in Harrisburg.