The Orrs Bridge Road bridge replacement project is approaching its completion with the help of a unique worker in Hampden Township.

Construction workers are using TyBot, an autonomous rebar tying robot, to help build an entirely new bridge over the Conodoguinet Creek as part of Cumberland County’s initiative to replace aging bridges. The new bridge, built alongside the old one, is scheduled to open in this fall, according to Samantha Krepps, Cumberland County’s communications director.

According to Krepps, the Orrs Bridge repair project was slightly delayed due to the coronavirus pandemic. However, construction workers are now continuing the work.

Workers will connect Orrs Bridge Road to the new bridge in August. A detour will be in place Aug. 3-Sept. 17. Orrs Bridge is the county’s highest-traffic bridge and the replacement project will cost around $7.5 million. The Orrs Bridge project is part of a $15 million project to repair its 28 county-owned bridges.

Cumberland County paid for the program in part by imposing a $5 annual vehicle registration fee, which generates $1.1 million annually for the bridge repairs; Cumberland County is paying for 5% of the project, while 80% and 15% come from federal and state transportation funds.

TyBot is a subsidiary of Advanced Construction Robotics, a company co-founded by Jeremy Searock, who has a background in robotics at Carnegie Mellon University, and Stephen Muck, the chairman and CEO of Brayman Construction Corp. The two combined their talents to create TyBot.

Most bridges feature a lattice network of rebar ties underneath that need to be tied to meet construction code. These ties reinforce the bridge after it is paved. TyBot detects and ties intersections of these rebar beams together to strengthen the bridge.

Searock said his vision for TyBot is to decrease the cost of infrastructure.

"In order to decrease the cost of infrastructure we are bringing the benefits of an automotive manufacturing environment to the job-site itself. That's really not been possible before without robotics and artificial intelligence,” Searock said.

One of TyBot’s purposes is help reduce health risks, according to Danielle Proctor, TyBot’s business development and DBE specialist. TyBot requires human presence to assess the quality of its work. TyBot has a success rate of 98-99%, according to TyBot officials.

“In many instances, TyBot understands that it cannot make a tie due to space constraints and doesn’t even attempt the tying process,” said Gabrielle Proffitt, Advanced Construction Robotics marketing and communications manager.

Workers mark the intersections TyBot misses and humans then manually tie them. Additionally, there is a gap of 1.5-2 feet on both sides of the bridge that TyBot cannot reach that workers have to tie.

“By automating the reinforcing bulk tying activity, TyBot has the potential to save one safety incident for every 71,000 man-hours reduced,” Proffitt said.

Searock said TyBot helps circumvent a labor shortage in America. Searock said the limited workforce in the construction industry today can take on the harder, more complicated portions of building a structure while TyBot handles the mundane tasks.

"Companies can use the existing limited workforce to do harder and more complicated, while robotics do the bulk work,” Searock said. “This is what leads to greater productivity.”

That productivity can be measured by the amount of ties tied in an hour. Proffitt said TyBot ties 1,000 ties an hour, whereas a human worker can tie 100-150 ties per man-hour.

The move to incorporate more robotics and artificial intelligence into construction included factors beyond just the technology, Searock said. Computers are cheaper and can be used in rugged environments, he said. Additionally, he said the cost of sensors have dramatically decreased in the last five years.

“There’s a decrease in cost that is making a real product doable because it is not too expensive,” Searock said.

Advanced Construction Robotics is also in the process of developing IronBot, a machine that will help workers as they complete the task before TyBot. IronBot will lay the rebar out on the bridge, while TyBot will tie the intersections. IronBot will be unveiled later this year, Searock said.

“When it comes to rebar installation, we will be able to do twice the work in half the time for a 400% increase in productivity,” Searock said. “The world is beginning to change its mind that robotics are not science-fiction.”

The total allocation for the project is more than $7.9 million, 80% funded by the federal government, 15% from state government and 5% from the county. 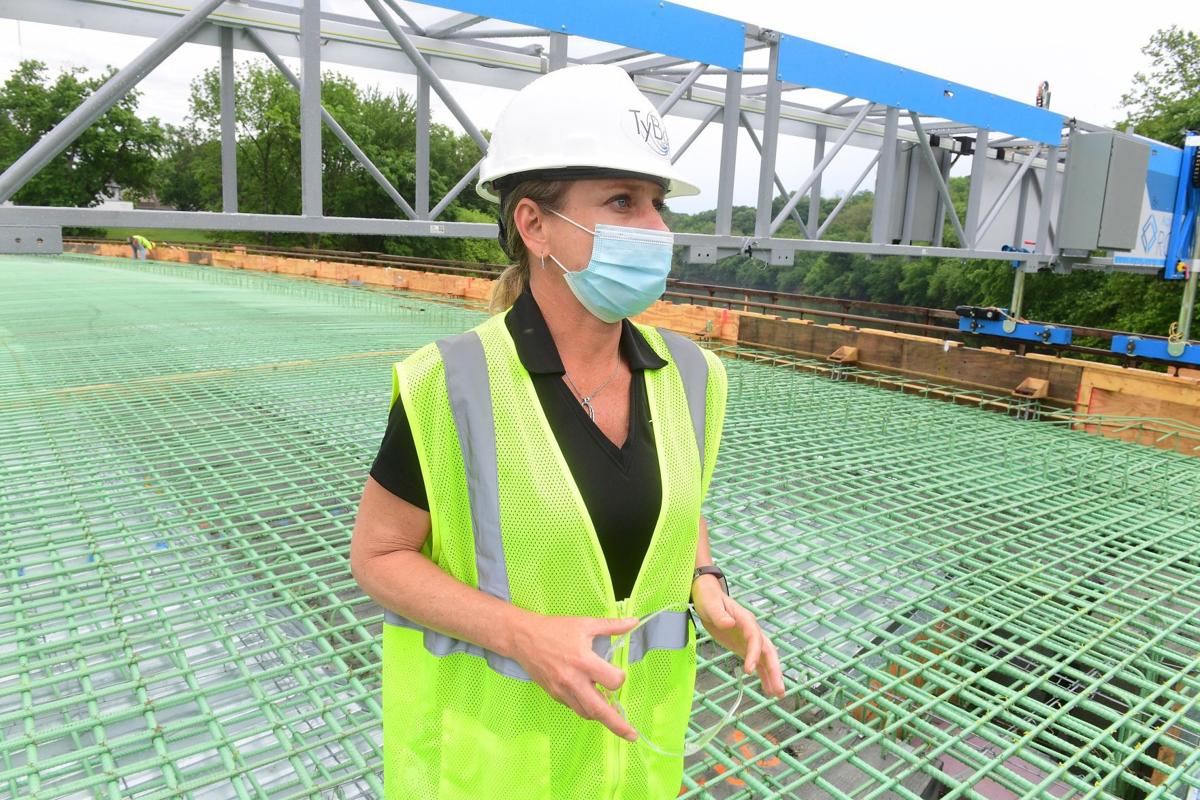 Danielle Proctor, business development and DBE specialist, said one of TyBot’s purposes is help reduce health risks. The robot is being used during the construction of a bridge on Orrs Bridge Road in Hampden Township. 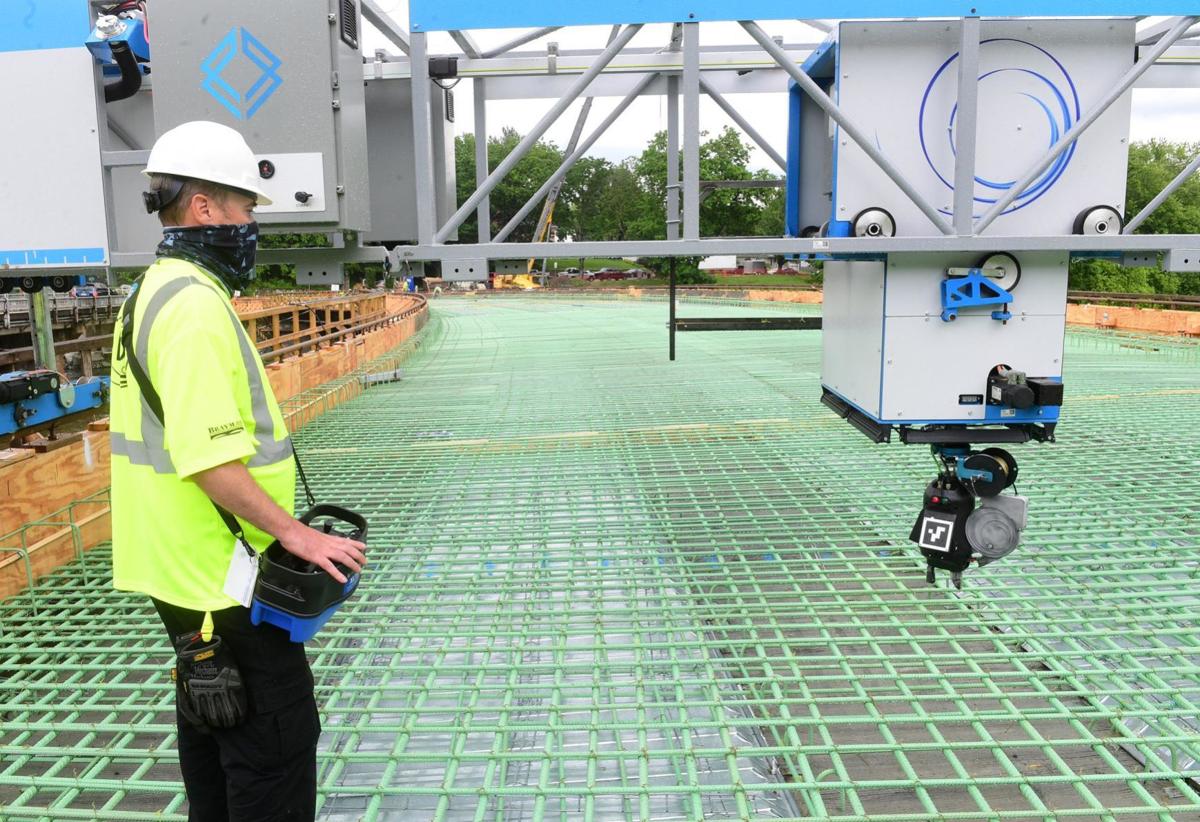 Doug Fee, quality control technician, watches the progress of TyBot during the construction of the bridge on Orrs Bridge Road in Hampden Township. 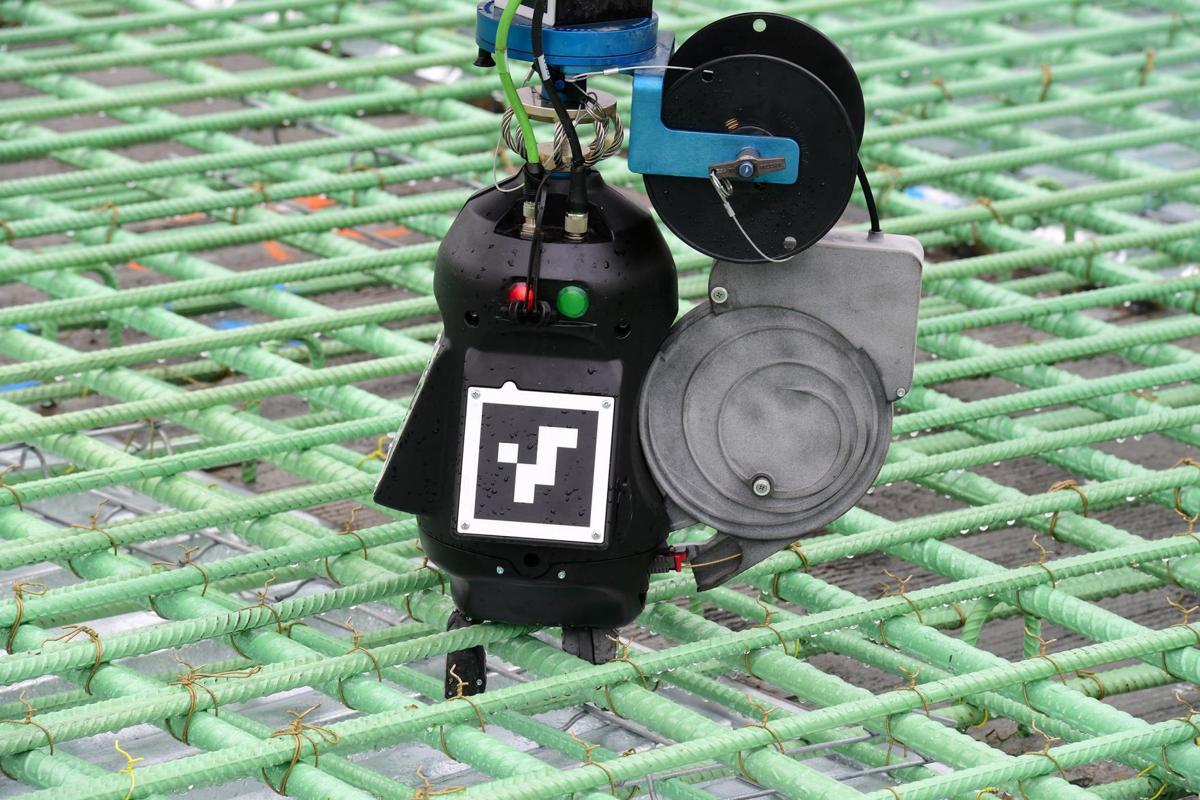 TyBot is being used in the construction of the bridge on Orrs Bridge Road in Hampden Township. TyBot, an autonomous machine, ties rebar together before the concrete is poured. 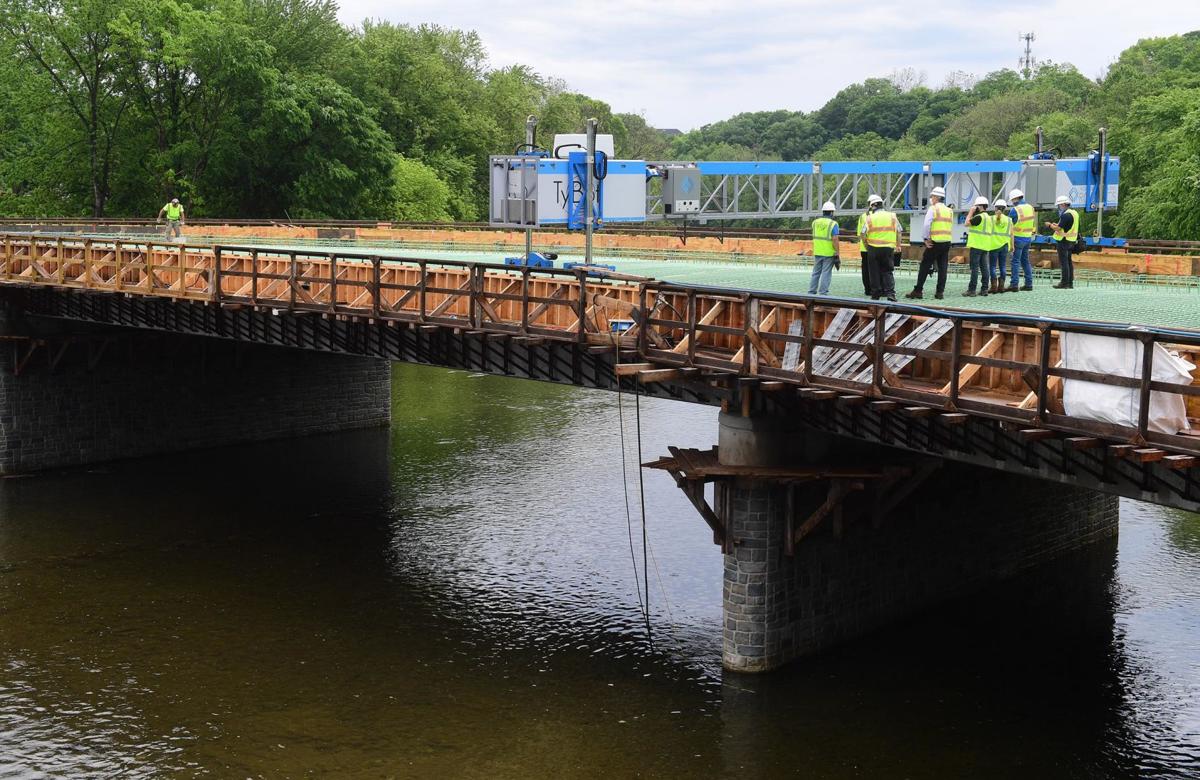 TyBot, an autonomous machine, ties rebar together before the concrete is poured to make bridges. 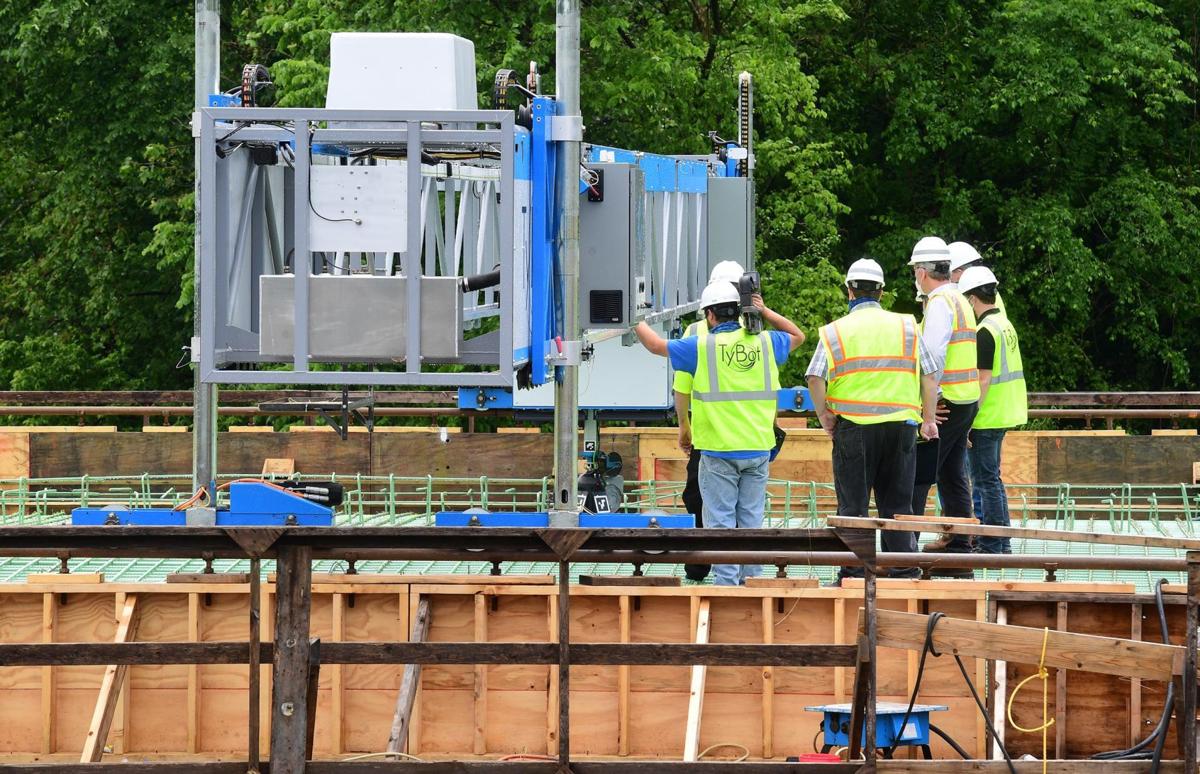 TyBot is being used in the construction of the bridge on Orrs Bridge Road in Hampden Township.