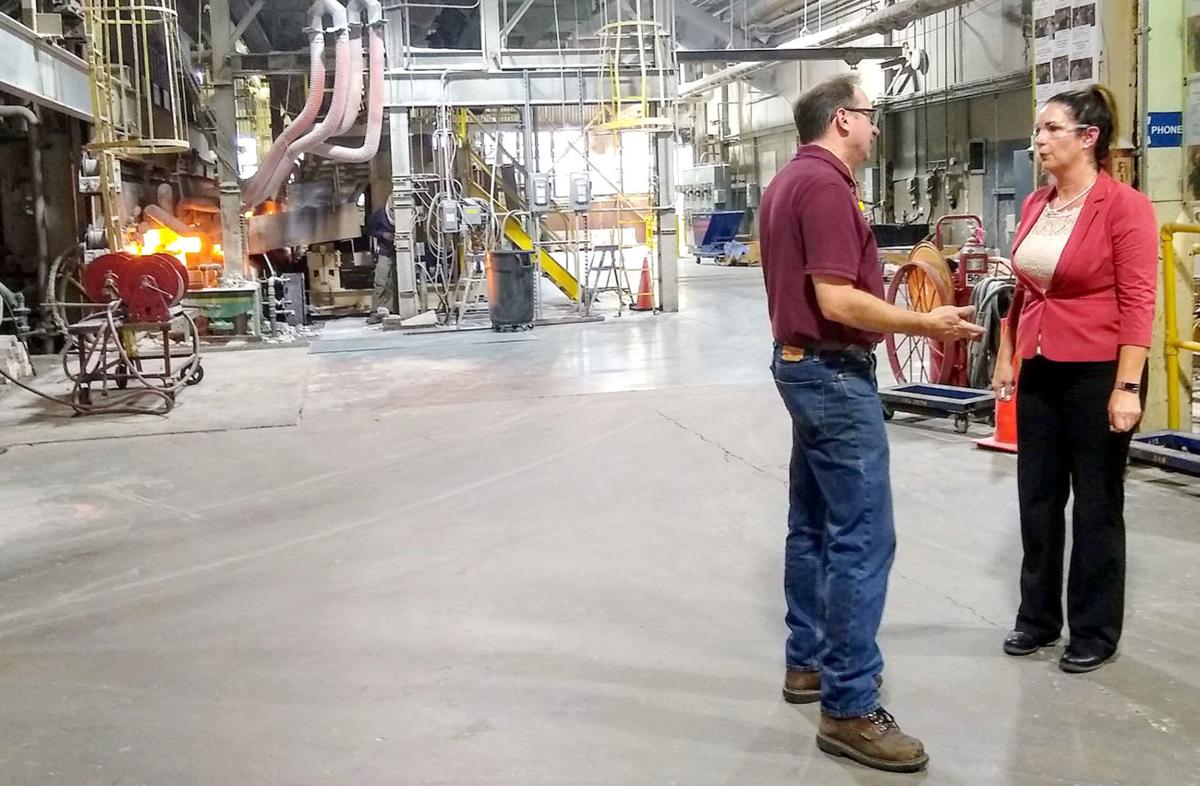 Vitro Architectural Glass production engineer Todd Magee speaks with Deputy Secretary Jennifer Berrier of the Pennsylvania Department of Labor and Industry during a tour of the glass manufacturer. 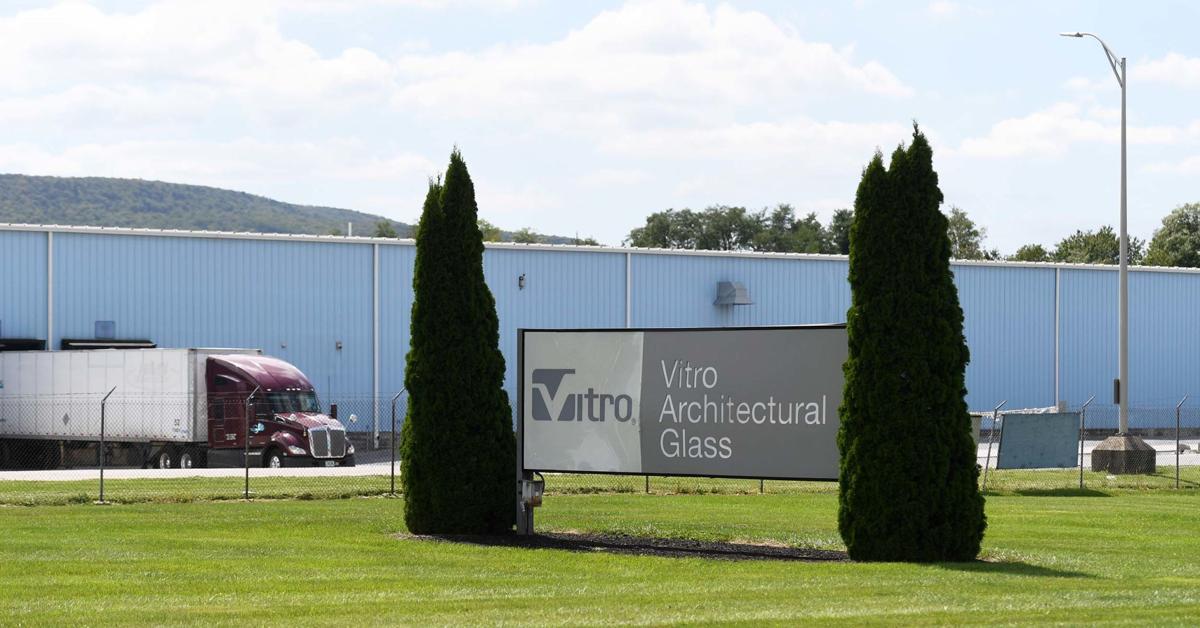 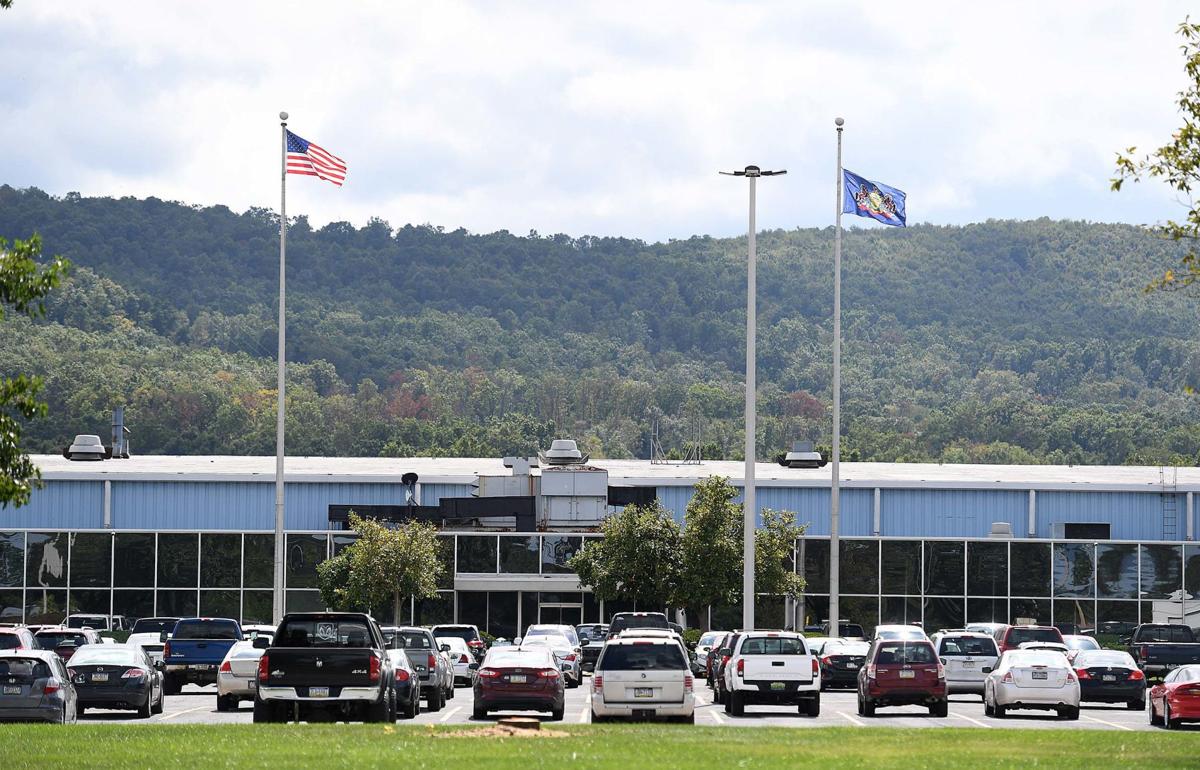 In the millennia that glassmaking has been around, a lot about the process has changed — and a lot has also stayed the same.

That can also be said about the Vitro Architectural Glass factory in South Middleton Township, located just east of Mount Holly Springs. Built in 1972 and run for most of its life by PPG, the facility moved to Vitro in 2016 when PPG sold its flat-glass division.

Since then, Vitro has made a multi-million dollar investment in rebuilding both of the factory’s glass production lines.

But the newly-refurbished factory still adheres to the same basic principles — mainly, you need a lot of heat, and you have to be very careful. During a recent tour of the facility, Vitro production Engineer Todd Magee explained the basics.

The process starts in the site’s rail yard where large quantities of sand and soda ash are brought in by rail car. Other additives used in certain types of glass, such as cobalt, iron, and other minerals, are typically brought in by truck.

Materials are piped from storage tanks into one of the two main furnaces that start the glass production lines. These furnaces run between 2,500 and 3,000 degrees Fahrenheit, and the space on the factory floor between the two — where technicians often walk — has an air temperature of roughly 135 degrees. Vitro closely monitors employees who work in such areas, requiring frequent breaks and water intake.

The main furnaces have to be rebuilt every 12 to 15 years, Magee estimated, as the heat deteriorates the masonry itself. A variety of insulators are used to keep the heat in the factory’s equipment, the most common being synthetic wool. Certain materials such as aluminum and nickel are forbidden because they react poorly with the materials used in the glass and can cause contamination of the product.

From the main furnace, the glass is conveyed and cooled slightly on its way to what Magee calls “the lip,” where it flows onto a flat bed of molten tin. As the glass floats on the tin bath, circular head grips one edge of the pliable glass and stretches it flat.

It’s at this stage that the size and thickness of the glass can be controlled, a process that takes a certain amount of finesse to manipulate the temperature progression of the tin bath ovens so the glass cools at a certain thickness. On the day Magee demonstrated the process, one line was producing three-millimeter glass, the other one 12-millimeter.

After the tin floating, the glass moves onto an annealing line, which cools the glass slowly to achieve the proper temper. This is a physically long process – the annealing conveyors are nearly a quarter-mile long, Magee estimated.

The glass sheets then exit the hotter — in terms of temperature — side of the factory and are conveyed beneath a computer-controlled apparatus that scans the sheets and cuts them to the appropriate size and shape for the given application.

Excess pieces are automatically fired into a shredder, and the scrap glass returned to the furnace at the beginning of the line to be re-melted.

Vitro currently employs 420 people, plus another 50 to 60 contractors, at the South Middleton Township glass works, according to Mary Schlusser with the company’s human resources division.

The two lines combined produce about 1,200 tons of glass per day, and it’s difficult to overstate the sheer amount of heat involved.

When the two production lines were rebuilt, Schlusser said, it took 30 days for the furnaces to cool down, 45 days to do the work, and another 30 days for the system to fully heat back up.

The system if fired with natural gas, Magee said, but has an oil backup in case of service disruption.

Wolf’s push for a minimum wage increase — something he has asked for in every budget proposal, but not yet gotten from the Legislature — has become a year-round endeavor.

There are other companies that, like Meadowbrooke Gourds, make hand-crafted and hand-painted gourd decorations based on original designs. Yet the company on Potato Road in Upper Frankford Township gained an edge in efficiency and quality by hiring employees to specialize in specific steps in the crafting process, Bear said.

Vitro Architectural Glass production engineer Todd Magee speaks with Deputy Secretary Jennifer Berrier of the Pennsylvania Department of Labor and Industry during a tour of the glass manufacturer.