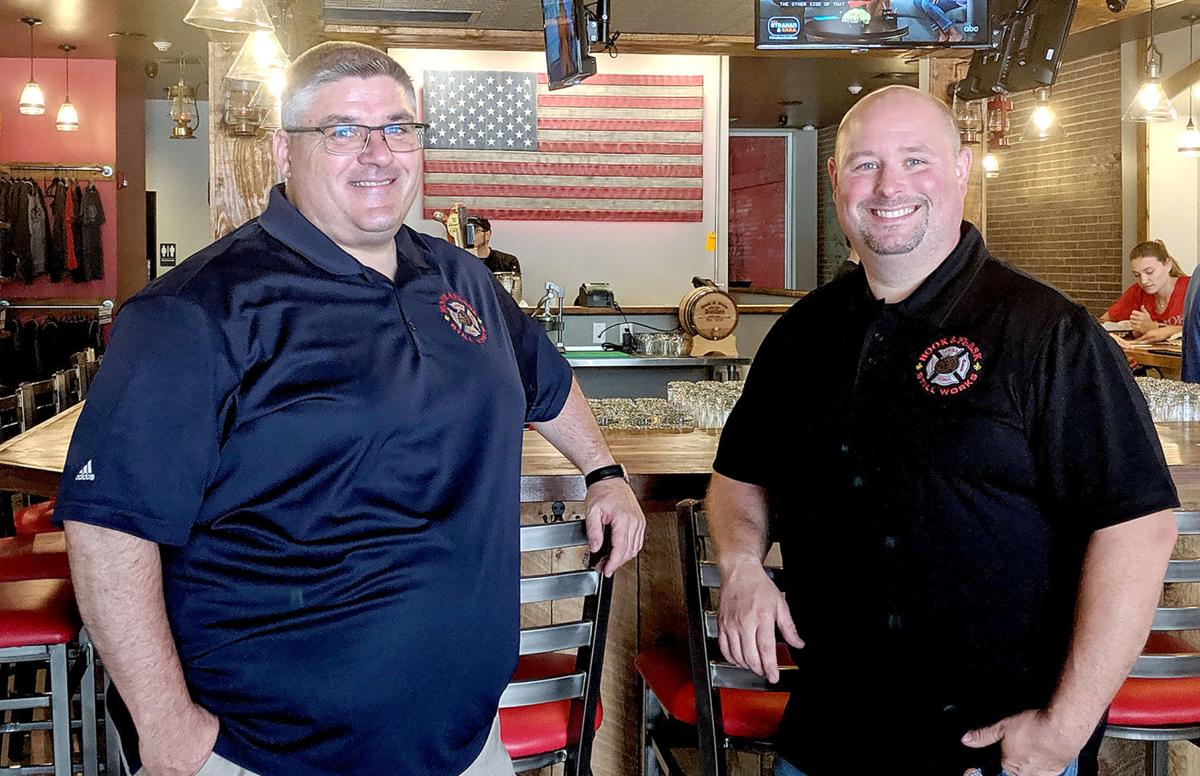 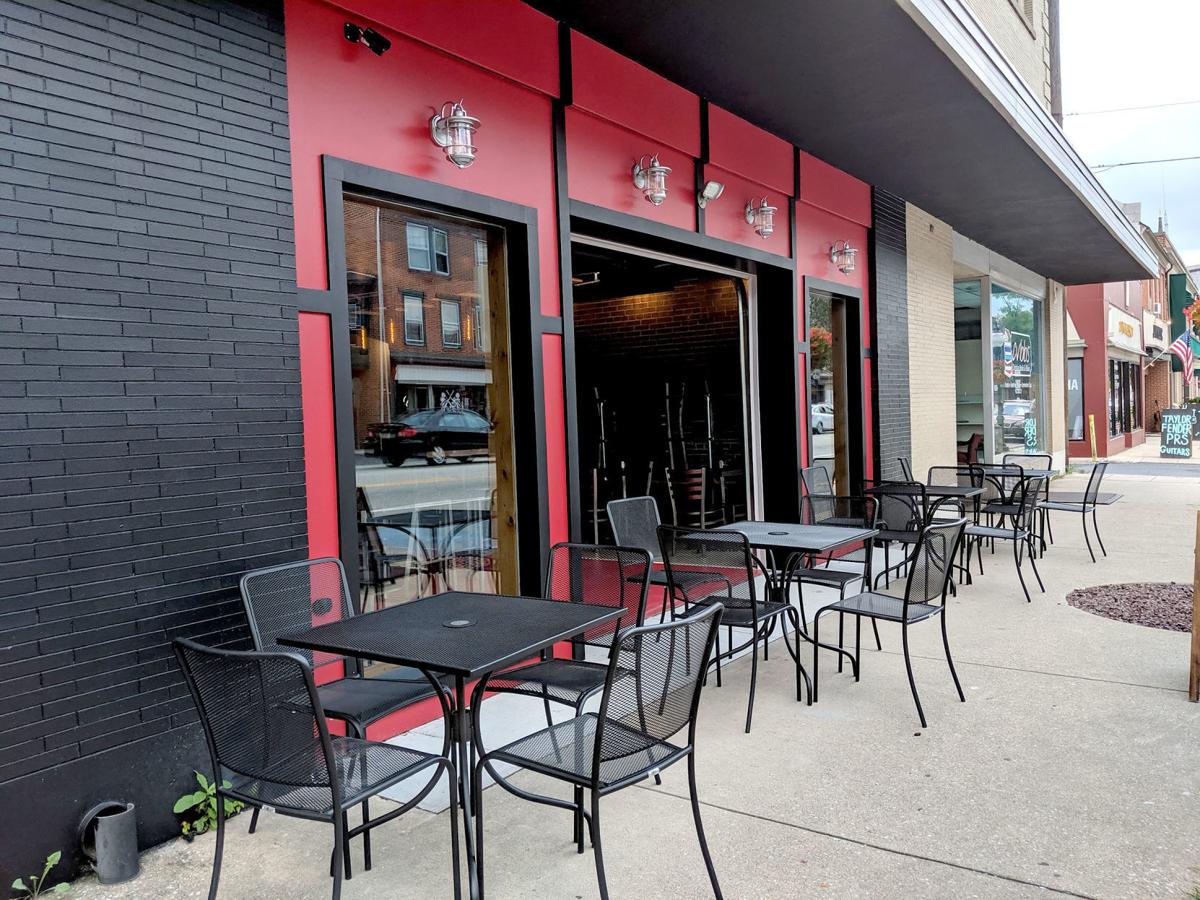 The front of Hook & Flask Still Works can open like a garage door. 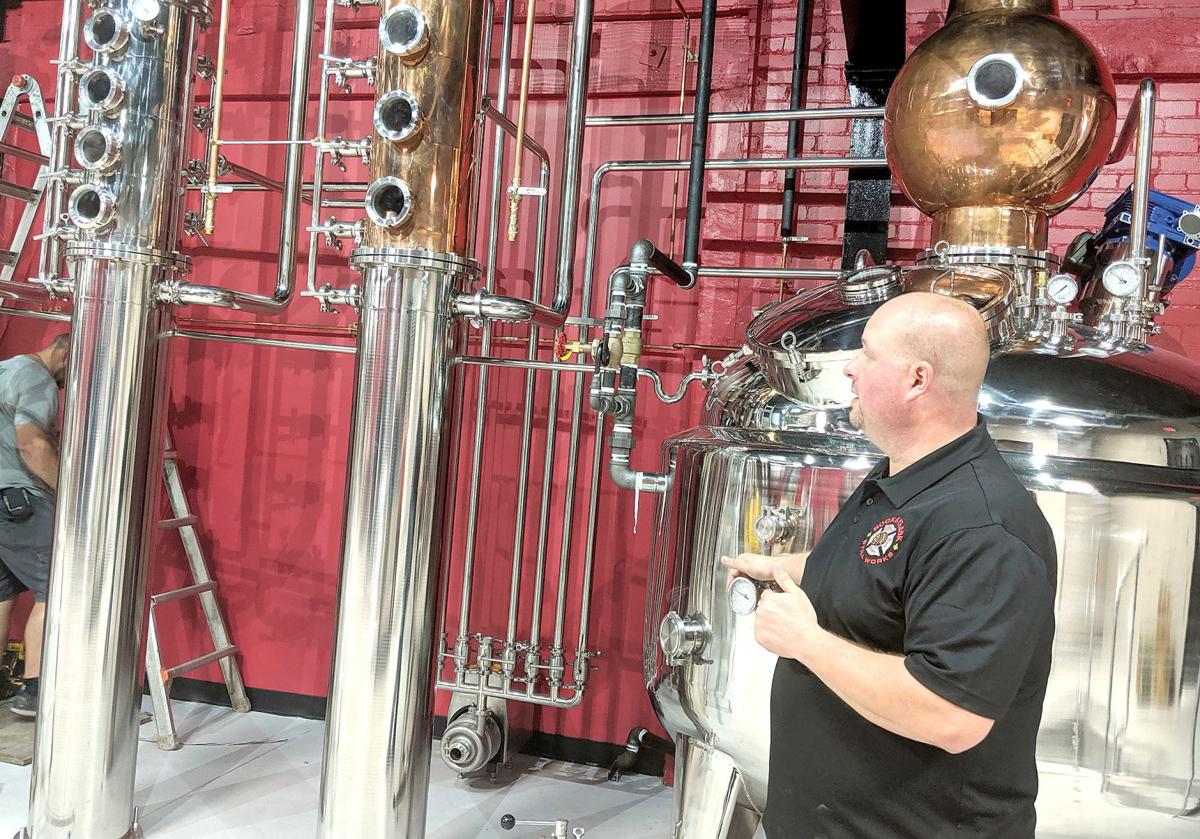 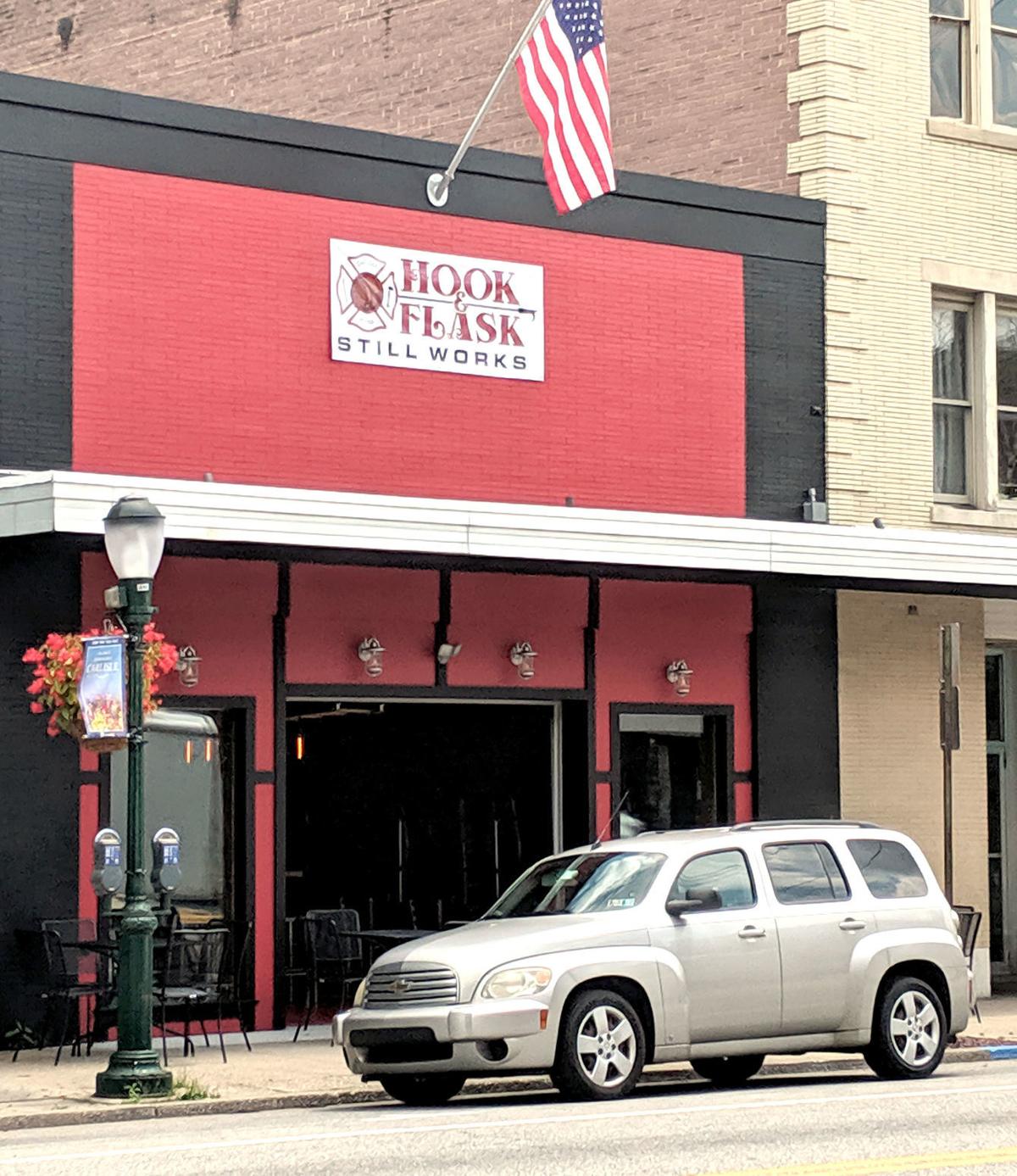 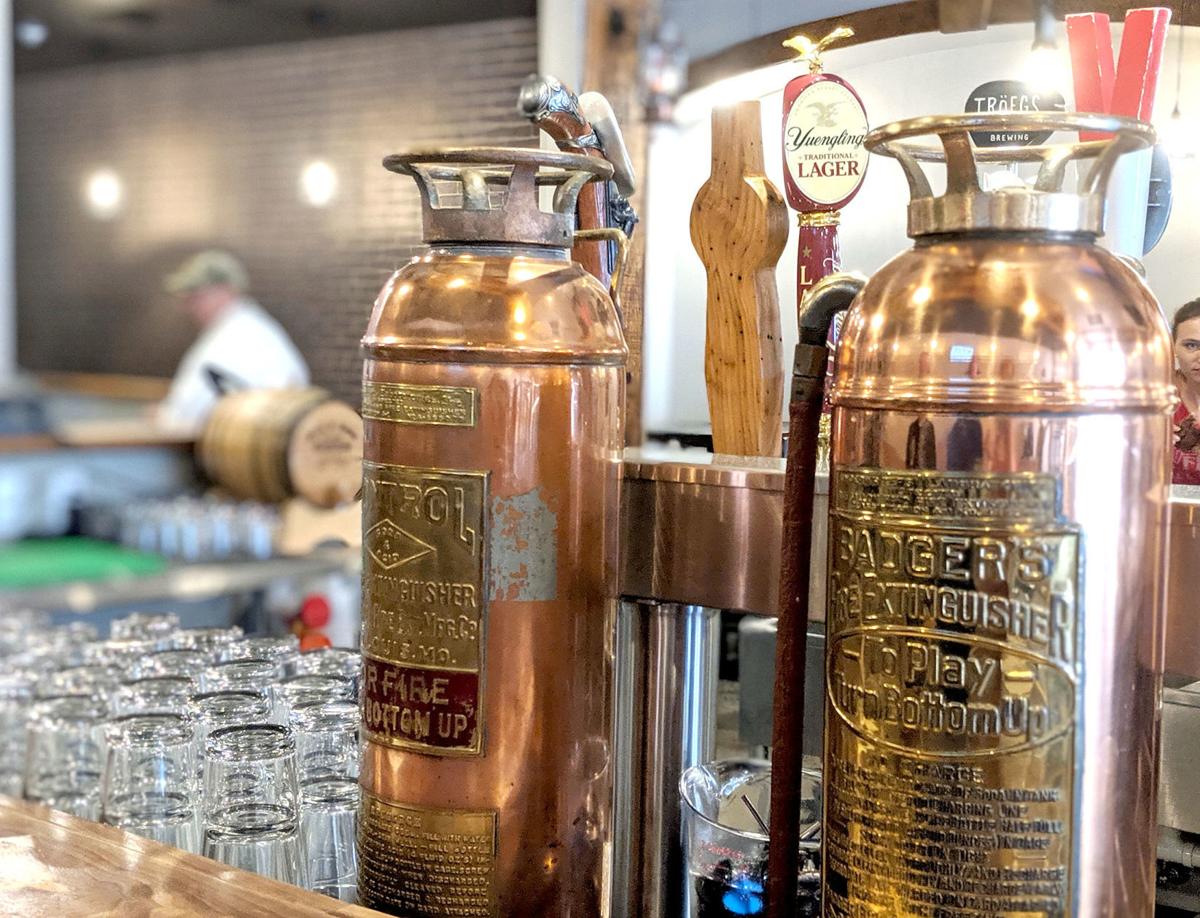 Antique fire equipment like these fire extinguishers is part of the decor at Hook & Flask Still Works.

For the first time since Prohibition, there’s a legal distillery in Carlisle.

Hook & Flask Still Works opened its big garage door at 137 N. Hanover St. Wednesday for a soft opening. The grand opening, which will feature three bands, will be held from 11 a.m. to 11 p.m. July 20. The Carlisle Area Chamber of Commerce will hold a ribbon cutting ceremony July 19 for the distillery.

That experience played a role in the development of the firehouse theme throughout the building.

Pennsylvania once again has produced more craft beer than any other state in the country.

The large glass-front opens and closes like a garage door or the bay door at a firehouse, but is made of three panels, the center of which is a door. This allows the door to remain closed on particularly hot and humid days or in the winter.

“We wanted the only Carlisle storefront that could open up,” Flickinger said.

A red rectangle on the floor marks where the fire truck would be parked. An antique ladder forms the light fixture above the long center table. An old hose forms a rail along the wall, and an American flag made from old hoses hangs behind the bar, which along with the center table were handmade by Redbeard Rustics.

“Our main goal was to do the classy, historical fire theme and really shine that through,” Flickinger said.

At the same time, Farrell said they made sure the firehouse motif wasn’t so overwhelming that it would make nonfirefighters feel out of place.

Shippensburg University has created, if only by accident, quite an alumni network in the craft brew industry.

Farrell and Flickinger started out with their own ideas for the design, and then a designer with Creative Building Concepts helped them tweak it.

The designer came up with one of the more unusual aspects of the design: the open kitchen behind the bar.

Farrell said the thought was that the kitchen is a central spot in many firehouses, and that feeling could be recreated through the open kitchen concept.

It’s not a large kitchen, but it doesn’t have to be.

“The concentration was to try to be on small plates and appetizers so we have some decent food, but we’re not a restaurant,” Farrell said.

Still, he said they do have some good lunch and dinner options.

The firehouse theme carries over to the names of the drinks on the main menu such as “Salty Fireman,” “Rescue Squad” and “Blitz Fire.”

Hook & Flask also serves wine and craft brews from local brewers including Burd’s Nest Brewing Company, Desperate Times and Molly Pitcher Brewing Co. It’s part of the cooperation that Farrell said they’ve experienced so far and anticipate continuing into the future, perhaps even to a collaboration whiskey using one of the craft brews.

“Everybody’s been good to us, and hopefully when we’re ready to distribute spirits they’ll be ready,” he said.

Where It Stands: Hook & Irons Distillery aims for summer 2019 opening in Carlisle

Where It Stands is a weekly story that takes a look at what has happened with a news story since it was last reported on by The Sentinel.

The massive stills are visible through a glass window, which also gives patrons a glimpse of the 19-foot tall vodka column that seems to disappear into the ceiling. It actually goes into a cut out made into the ceiling of the back room because it was more cost-effective to make a “bump-out” on the roof than to buy the equipment that would cut the size of the column, Farrell said.

Flickinger, the chief distiller, has been distilling Flashover, an apple pie moonshine, on a 20-gallon still, but Farrell said they hope to fire up their big still in the next week or week and a half.

In this case, Mutual Aid refers to a whiskey distilled in Virginia and bottled at Hook & Flask.

Aside from their own spirits, Hook & Flask uses primarily Pennsylvania-based spirits including a rye and gin from Pittsburgh, vodka and bourbon from Philadelphia vodka and rum from York County.

“Hopefully, by the end of August, we’ll have our vodka and our gin here,” Farrell said.

Those who have been following the development of the distillery may notice the name changed recently from the intended name of Hook & Irons. Farrell explained that a clothing company in Florida had copyrighted their original name, and brought it to their attention. They decided to change the name of the distillery rather than risk legal issues.

Farrell and Flickinger hope the distillery, along with the planned development at the former Masland/IAC site, will draw people further north on Hanover Street as they explore Carlisle from the Square.

“There’s a lot of good things going on at this end of town,” Farrell said.

A local favorite craft beer has found a home.

Sheetz introduces its own craft beer

Pennsylvania ranks high among the 50 states when it comes to craft beer. According to the most recent statistics compiled by the Brewer’s Asso…

Like other distilleries across the nation, Carlisle's Hook & Flask Still Works has put their equipment to work making hand sanitizer for emergency responders and medical personnel.

The front of Hook & Flask Still Works can open like a garage door.

Antique fire equipment like these fire extinguishers is part of the decor at Hook & Flask Still Works.