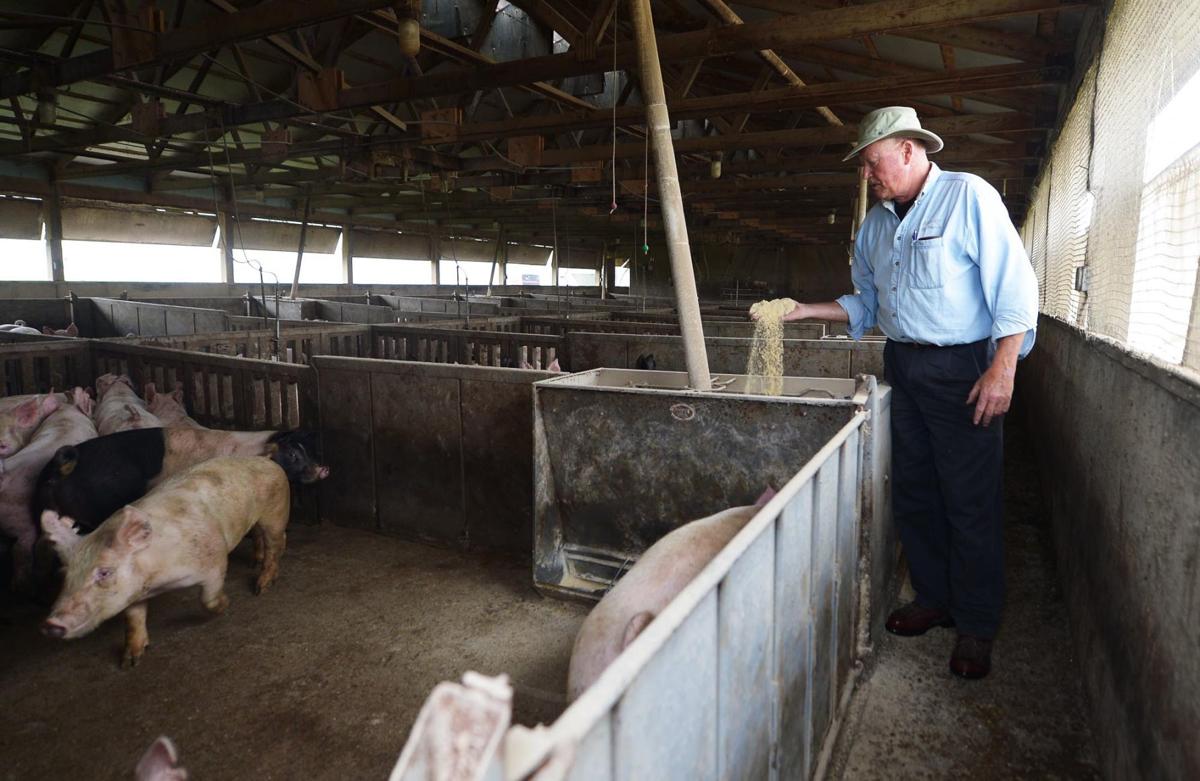 Dave Reinecker feeds pigs at his farm in York Springs. 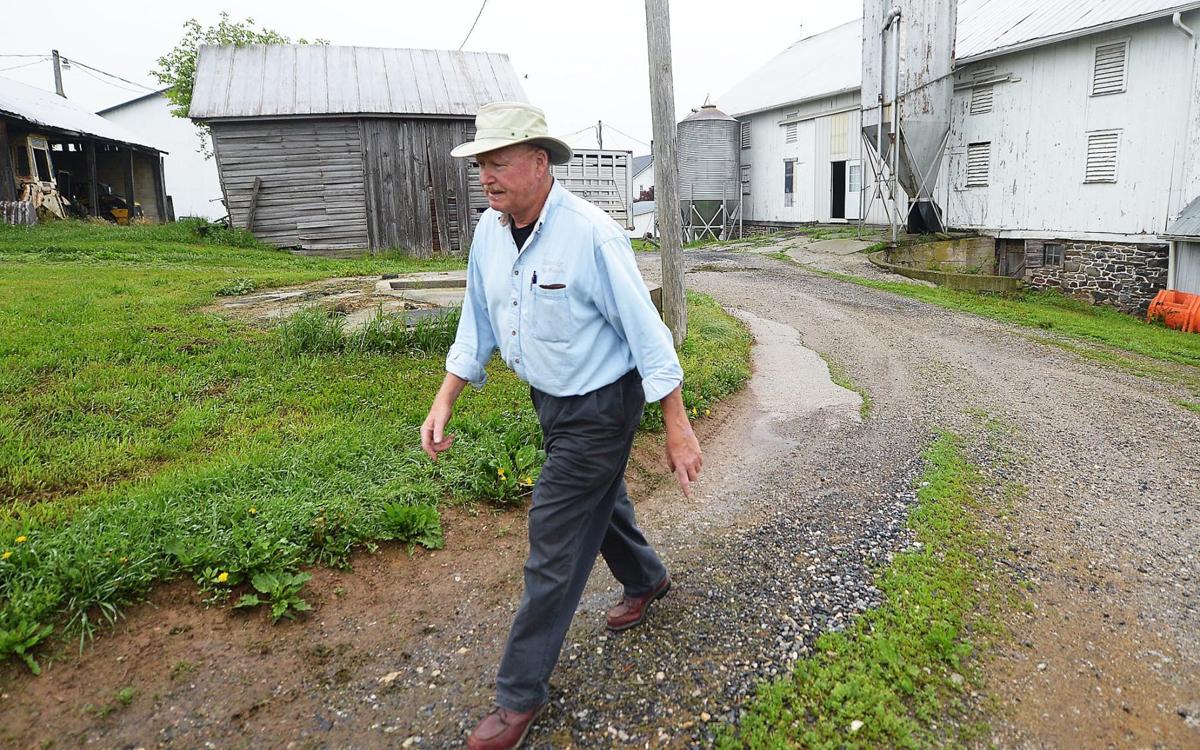 Dave Reinecker on his way to feed pigs at his farm in York Springs.

As the crow flies, it’s about 6,800 miles from Beijing to York Springs in Adams County, where Dave Reinecker manages one of the Midstate’s largest independent pig herds.

But Reinecker can feel the price impact almost immediately.

Although not nearly as large as the factory farms of the Midwest, Pennsylvania’s hog farms are still a significant part of the agricultural economy.

In fact, pig farming has been one of the state’s highest growth industries over the past two decades. In 1997, Pennsylvania produced about 263 million pounds of hogs — in 2017, the state churned out 558 million pounds, according to the United States Department of Agriculture.

The increase in animal agriculture also necessitates a growth in crop consumption. Pigs have to eat something, meaning that Pennsylvania is actually a net importer of soybeans.

“We can’t grow enough grain or crops in this state to feed all of our cows, pigs, and chickens,” said Dave Swartz, an agricultural researcher with the Penn State Extension. “We import a whole lot of corn and soybeans from the Midwest to feed all our animals.”

The economy of pigs and soybeans is now in limbo, however. In March, the Chinese government announced tariffs on a basket of U.S. goods valued at $3 billion per year, including soybeans and hogs.

The move is in response to the Trump administration’s announcement of tariffs on foreign steel and aluminum coming into the U.S., sparking fears of a tit-for-tat trade war, the outcome of which is still unclear.

Tariffs on American hogs and soybeans would make them comparatively more expensive for Chinese buyers, likely causing the Chinese market to shift to other sources for its needs, creating a short-term glut and a drop of prices on those commodities in the U.S.

As Reinecker noted, hog prices dropped about 25 percent at the end of March before rebounding, according to USDA data. Average sale price for the week ending May 12 was $60.49 per hundred pounds, according to the USDA, still about $2 off prices from the beginning of March.

None of Reinecker’s hogs are actually going to China. While many farmers in Pennsylvania are on contract with a single large processor, Reinecker is one of the area’s largest independents, selling on-demand to mostly local distributors, such as Carlisle’s Wenger Meats.

But nationwide, 27 percent of U.S. hog production goes overseas, Reinecker said — and it’s that component, even if you’re not the one exporting, that shifts prices.

“You have to realize that pork as a commodity is an international market,” Reinecker said. “Even if our hogs aren’t the ones’ being exported, somebody else is making up for our 27 percent, so to speak.”

That wasn’t always the case. There was a time when the United States was a net importer of pork. But since 1989, according to the National Pork Producers Council, pork exports have increased 1,300 percent by volume.

That rise coincides with the 1989 free trade agreement with Canada, which led to the signing of the North American Free Trade Agreement (NAFTA) in 1994, and trade liberalization in Asia soon afterward.

Mexico continues to be the largest export market, by volume, for U.S. pork, followed by Japan, China, and Canada.

But even as U.S. pork exports to China have grown, so has China’s domestic market. Much like Pennsylvania itself, China has to import soybeans to feed its animals. Half of the world’s pigs are now in China, Swartz noted, making it the number one consumer of soybeans in the world.

Exactly how this will pan out in the longer term is still unclear. If China begins drawing more imports from other parts of the world, those countries may need to import from the U.S. to meet their demand.

“We think because of the way trade flows, it won’t be as much of an impact,” Swartz said.

However, pork prices could see longer-term depression given that there is already an overabundance – the world has a theoretical surplus of pork production, O’Neill said.

The win-lose in that situation becomes a matter of who can get their products overseas faster and easier – but with the Trump administration in limbo with both Asian and North American trade agreements, the stagnant end of the market could fall on the U.S.

“We strongly were in support of the Trans-Pacific Partnership, through the 2016 when everyone was flip-flopping on the issue,” O’Neill said.

The concept of the TPP, as many economists have pointed out, was to put leverage on China by allowing the U.S. to easily displace its exports into other Pacific Rim countries, thus limiting China’s ability to fight the U.S. by imposing tariffs.

Farm bureaus across the nation have been disappointed at the Trump Administration’s lack of understanding on the concept, O’Neill said.

“What we have warned is that these other 11 nations would not wait for us, and they didn’t,” O’Neill said. “If the Trump Administration is going to look at the TPP again, we strongly advise them to do so.”

Further, O’Neill said, any hasty decisions regarding NAFTA could compound the problem further. Before NAFTA, O’Neill noted, the U.S. was only offloading about $9 billon of agricultural goods to Canada and Mexico per year – now, the two countries are absorbing $38 billion of the annual U.S. food surplus.

Although China may look to turn it’s pork imports away from the U.S., it’s unlikely that Chinese demand would ever actually drop.

“It’s not like you’re going to see the Chinese population go back to a primarily rice and fish diet as their incomes increase,” Reinecker said.

That trend, Reinecker reckoned, also plays into the domestic market. Although all of his sales are local, a major growth area has been buyers who cater to the Hispanic population.

Dave Reinecker feeds pigs at his farm in York Springs.

Dave Reinecker on his way to feed pigs at his farm in York Springs.