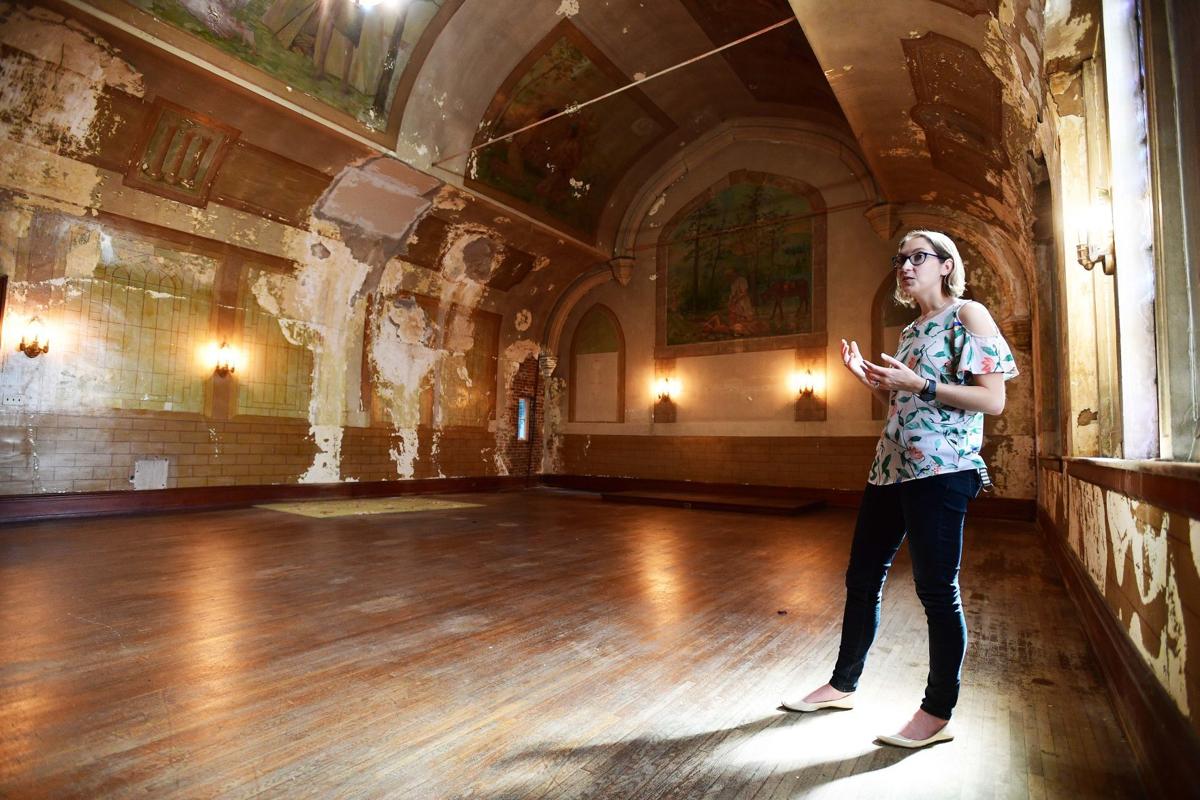 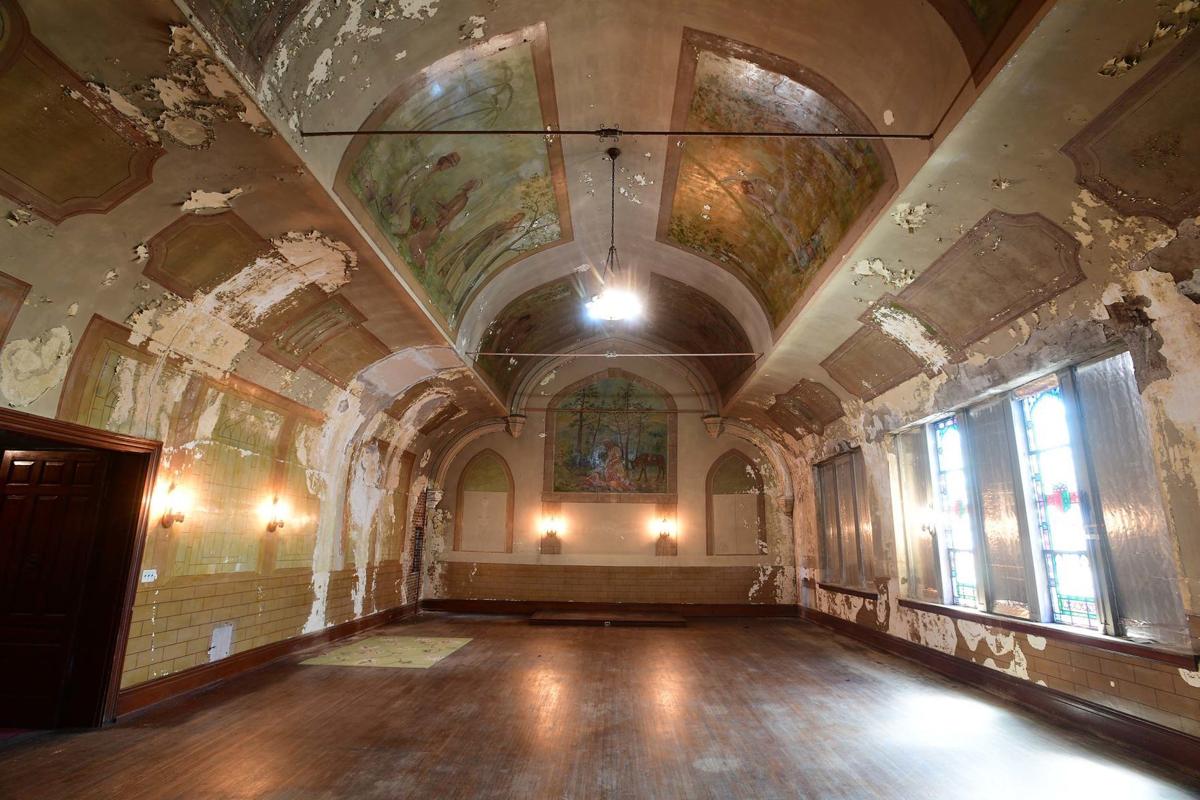 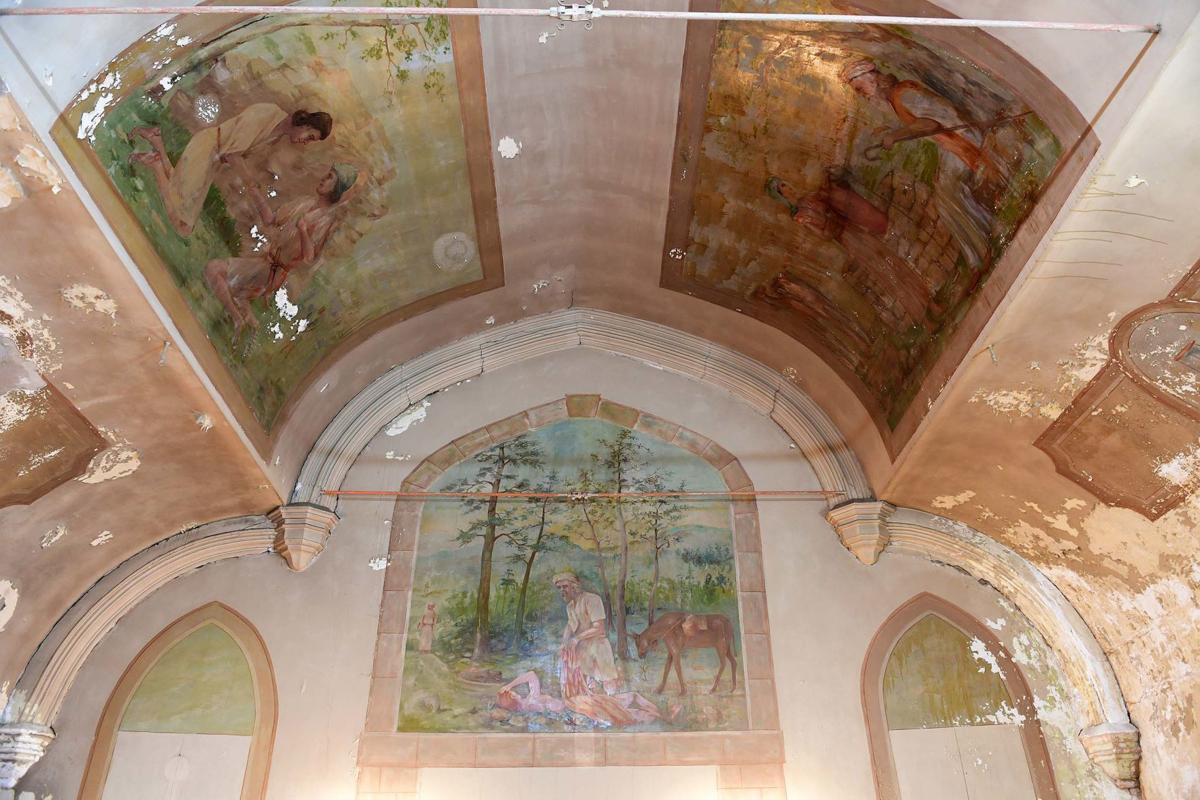 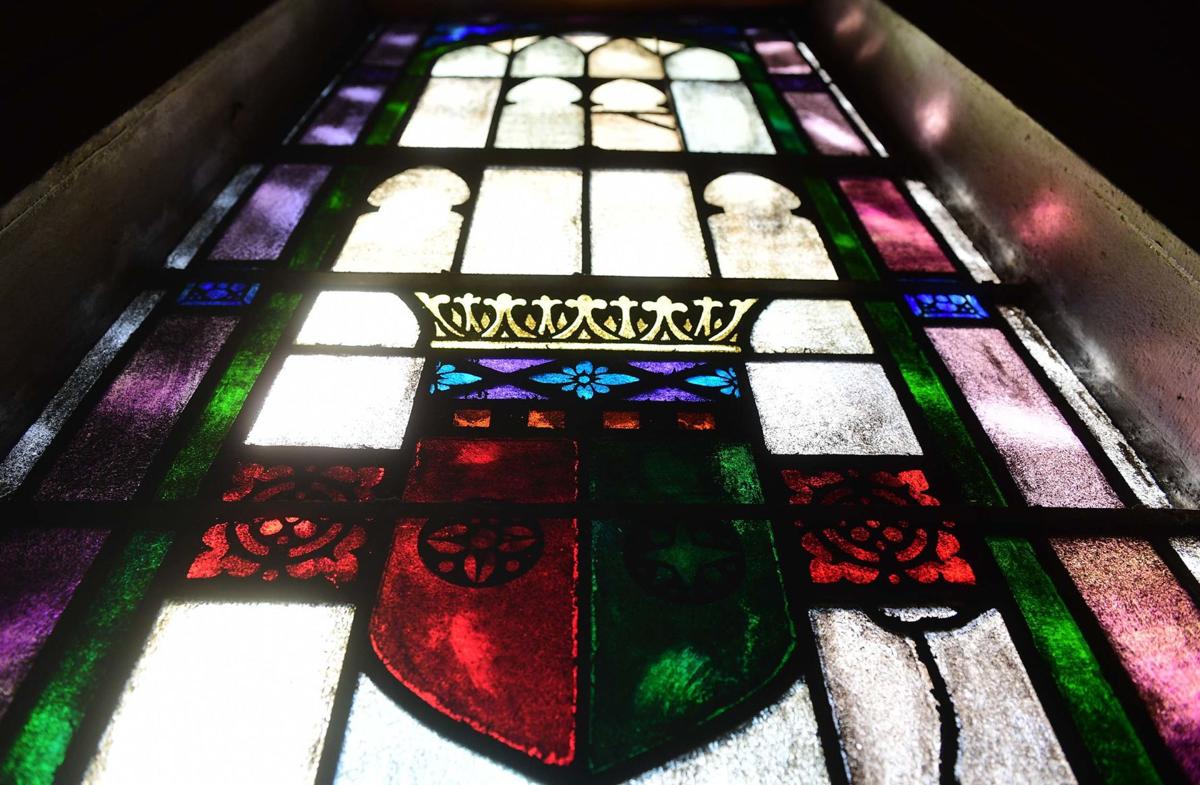 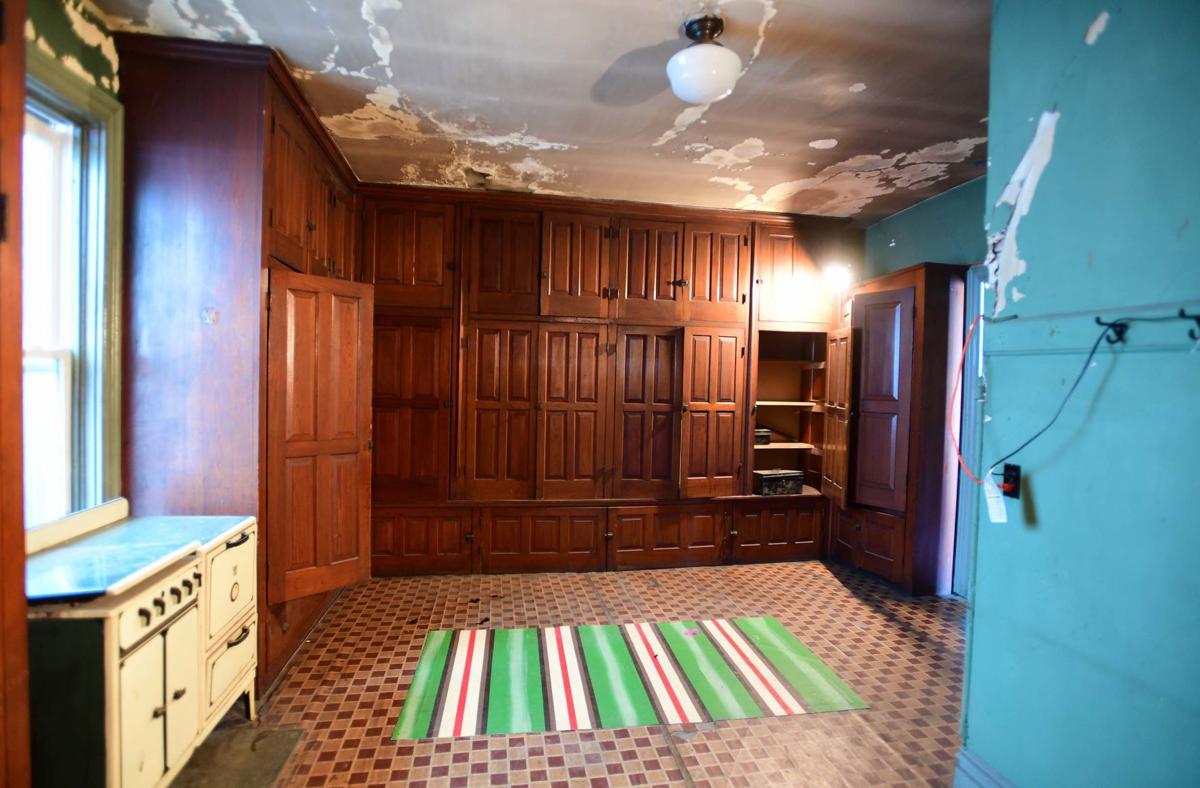 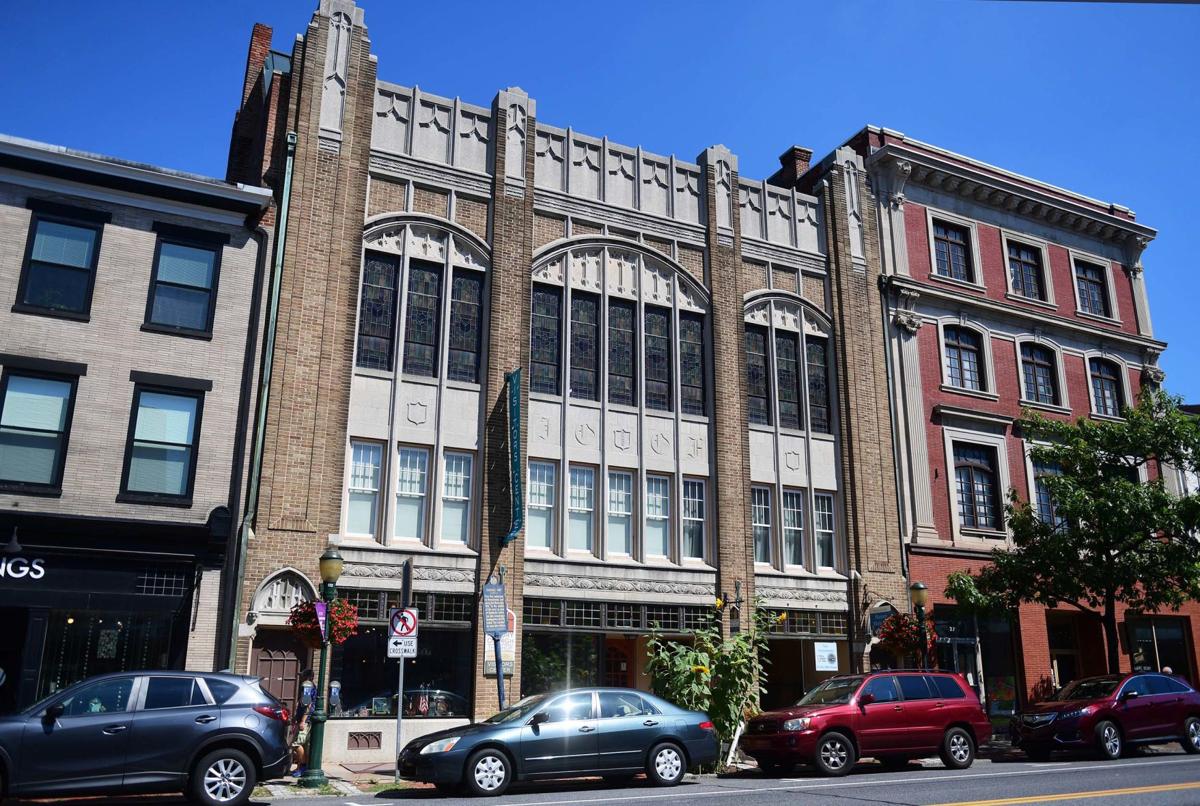 Take a trek up a two sets of relatively dark stairs and through a couple of small rooms that have seen better days and you’ll arrive in the meeting hall of the Independent Order of Odd Fellows.

That’s when you take a breath, not because of the stairs you climbed but because of the mural-covered, vaulted ceilings and stained glass windows that hint at both grander days in the past and potential for the future.

Cumberland County Historical Society bought the building in 2005. Currently, the first floor is home to History on High and the G.B. Stuart History Workshop. The second floor is rented to a Dickinson College sorority, said Lindsay Varner, community outreach director at the historical society.

It’s the third floor, though, that has become both legend and mystery in Carlisle.

The Independent Order of the Odd Fellows and Lodge 91 met at 31 W. High Street from 1854 to 1991. The benevolent society fulfilled its pledge to “visit the sick, relieve the distressed, bury the dead and educate the orphan” by making tens of thousands of dollars worth of donations, according to research done by the historical society.

The striking facade of the building was added in 1928 in time for the lodge’s 85th anniversary.

The murals depicting biblical scenes that adorn the hall’s walls and vaulted ceiling came along just over a decade later during a renovation in 1939. A member of the Odd Fellows, John Braught, painted both these murals and the ones at the United Church of Christ on North Pitt Street, Varner said.

The historical society is still learning about the murals, but have already discovered they were painted in ordinary house paints.

“It’s hard to tell what’s in some of them, but the windows were intended to look like they were actual windows so if you look very closely, you can see there are clouds at the top. It was meant to be like you were looking at an outdoors scene,” Varner said.

The chandelier and sconces that would have illuminated Odd Fellows meetings are still in place and now functioning thanks to work done by the historical society through a grant from the Lancaster Community Partnership.

The lighting makes a huge difference in the room, allowing visitors to see the hall as the Odd Fellows members would have seen it.

“When I first turned (the chandelier) on, it was like being blown away all over again by the building,” Varner said.

The historical society has no specific plans for the building right now, but it is about to start work on a master plan looking at the connectivity of its buildings surrounding the corner of North Pitt and West High streets.

“The downstairs is completely renovated and it’s being used by the society. We’re now looking at how can we connect these buildings a little bit better and what will we be doing with the second and third floor of this building,” she said.

Though he asked several times to see the hall, which was being used for storage, Tritt didn’t get a look at the hall until after the historical society bought it. When they emptied the space, Tritt said it was evident the roof was bad and that there had been a lot of water damage to the space.

Many of the murals and the wooden floor had suffered damage, and there were structural problems with the space and entire building, Tritt said.

After the roof was replaced, some of the plaster in the hall had to be redone and one windows of the windows was replaced. The stained glass windows escaped damage, but they do need to be releaded due to age. They have been boarded up until funds can be found to relead them.

“The hall has the potential to return to its former glory but that will require a lot of work and money,” he told The Sentinel in an email.

The obvious place to start is accessibility. An elevator has to be installed and restrooms added to make it a public space, Varner said.

Plasterwork that’s peeling away from walls and crumbling in corners needs to be stabilized and as many of the murals saved as possible.

“It’s very likely we’re not going to be able to save all of the murals. We did talk with an expert who did say that we might have to do a little picking and choosing, but we’d like to try and at least stabilize as many of the murals as possible,” she said.

Varner said the historical society is always happy to show off the space, and tries to have it open during major street events like the upcoming Harvest of the Arts.

Photos: A look inside the Independent Order of Odd Fellows building In Carlisle

There have been many times over the past few years when I have been working on a story downtown and someone will say, "Have you ever seen the …