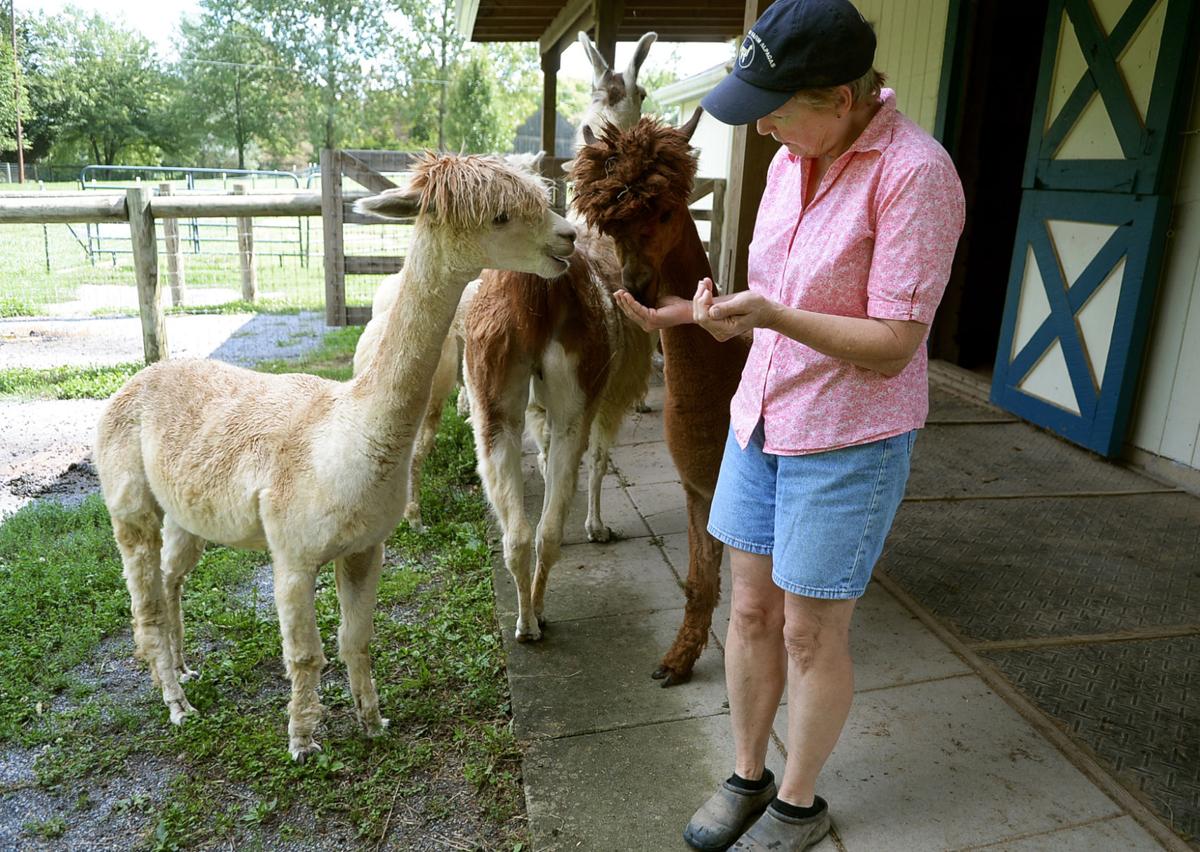 Nancy Imphong, owner of Shadowberry Farm Alpacas, gives some of her Alpacas a snack on Wedneday afternoon. 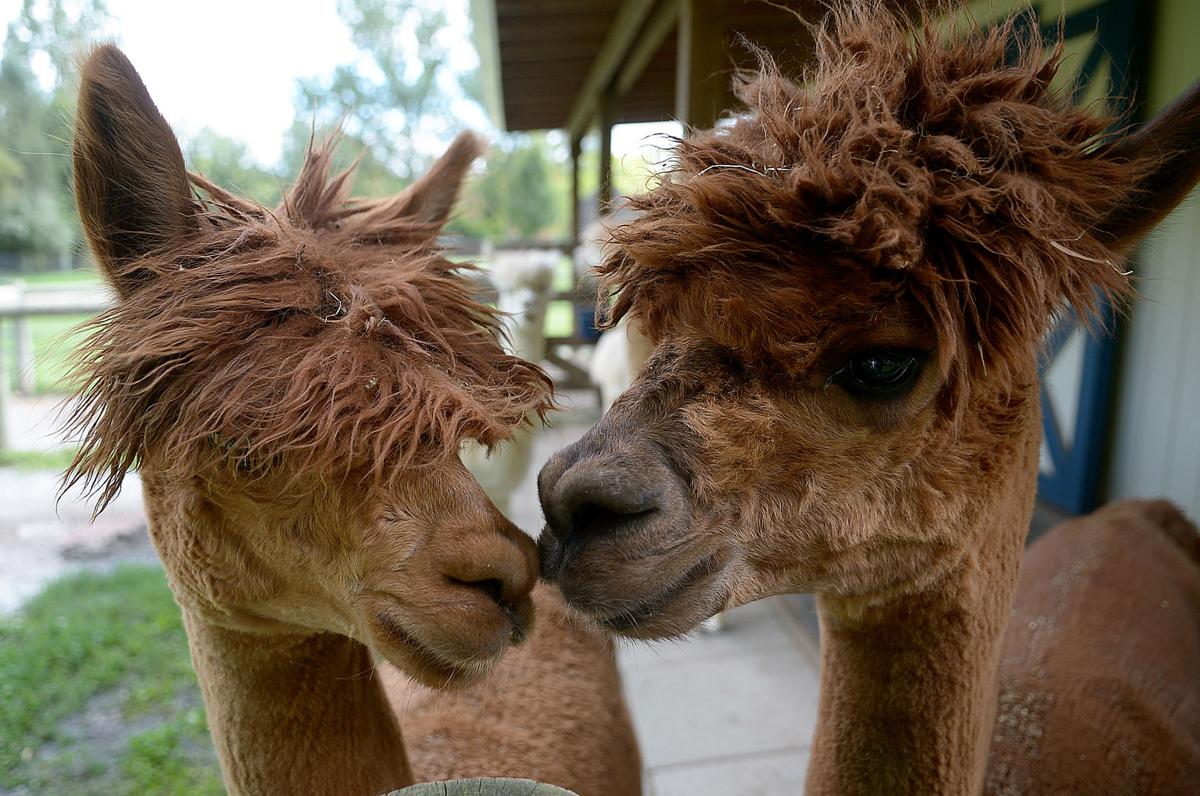 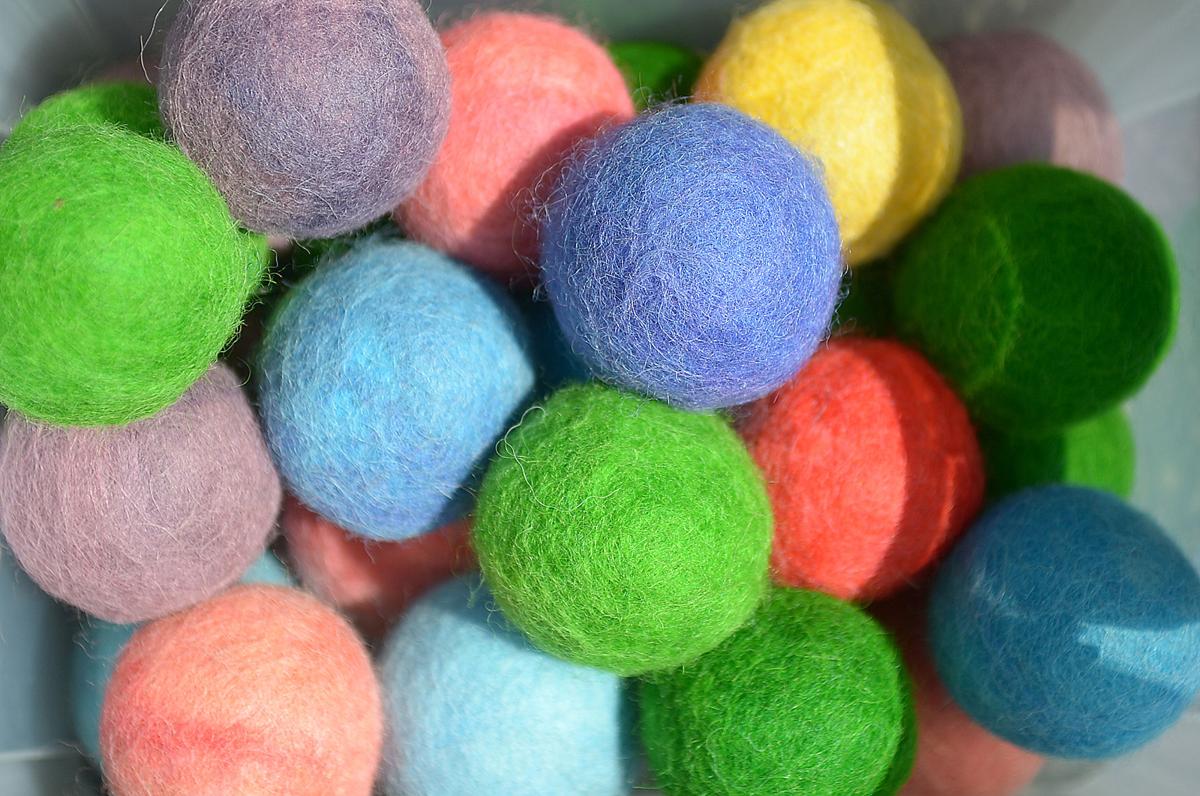 Nancy Imphong, owner of Shadowberry Farm Alpacas, uses the harvested fur from her alpacas to make a wide variety of garments.

As the dot-com bubble burst in the late 1990s, Darwin Kell, who had retired from the electronics field, lost a large portion of his retirement investments.

It was then that he and his wife began looking for ways to earn some extra income and give back to the community.

They bought a little farm on Old Stonehouse Road in Monroe Township and continued to search. Then, one day, his wife, Doris Kell, was volunteering at the Pennsylvania Farm Show in Harrisburg and she called Darwin and told him to get in the car and come to the complex.

What he and his wife saw were alapacas.

“Of course, if you see these animals, you fall in love with them,” he said. “They’re beautiful, they’re gentle, they’ve got this great disposition and personality, and I looked at Doris and I said, ‘But we aren’t farmers.’”

The couple then spent the following six months researching alpacas and visiting farms in Ohio before deciding to spend $50,000 on two pregnant females and one female baby alpaca to create Bent Pine Alpaca Farm. At the time, that was the going rate for the rare Suri breed.

It was popular to breed the animals then, to help bring them back from near endangerment in Peru. The Peruvian government agreed to sell some alpacas to other countries to earn some extra money to rebuild after a war. So the animals were only imported from 1992 to 1998, Kell said.

Then, once alpacas became more popular, other farms started to pop up and locals expressed more interest in having the animals.

“Most of the alpaca farms in the area I’ve either directly or indirectly helped them get started — probably at least 12 or 13 farms I’ve helped get started in the past 10 years,” Kell said. “It’s a lifestyle. I believe that the alpacas are the future in many, many ways. In Pennsylvania, we have had such a boom in alpaca farms that we are adding agriculture farms, productive farms, and we’re able to do that on small acreage.”

The Kells originally bought the alpacas to breed and sell to make some money, and while they made their initial investment back within four years, the reason for continuing to raise the animals has shifted.

When the recession hit, the animal was no longer as rare as it had been in the earlier part of the decade. So a $30,000 alpaca was now selling for $3,000 in some cases, Kell said.

That was something the Imphongs noticed when they started getting interested in the breed. The couple owns a small farm at 73 Biddle Road in Silver Spring Township and had formerly owned horses. They jumped into buying alpacas in 2007 — right before the asking price for the animals dropped.

With breeding out of the question, they, along with Kell, decided to sell the fibers and make a variety of products to sell at craft shows and from their barns.

Nancy Imphong started attending those shows in 2010, where she sells scarves and hats and other similar accessories. She said no one who gets into alpacas will survive unless they enjoy the lifestyle of owning animals and being on a farm.

“About 10 seconds after we got into it, the market bottomed out,” she said. “Meanwhile, the first year, I took up knitting, and then I took up spinning and weaving. I got really interested in working with the fiber. I weave, I spin, I dye yarn, I make things and I go to craft shows — that’s my thing. It’s turned into a nice little sideline business for me. I would advise anybody looking into this not to get into it unless you love the lifestyle, which I do, and you love the animals and you do something with the fibers, because there’s no market.”

Brother and sister duo, Russell and Rebecca Jones, followed in the same footsteps as the Imphongs, buying their alpacas a couple of years before the price dropped dramatically. Russell Jones said his sister was the big reason his family started looking into and eventually buying alpacas for their farm in Lower Frankford Township.

Rebecca was originally interested in using the fibers to create products for sale because alpaca wool is much softer than sheep wool and is actually warmer and lighter, as well, she said. However, Russell said they had looked into breeding, but there was no way they could make the money back on the initial investment, so they kept their focus on the fibers.

“We started promoting our farm as doing mainly just fiber, and we work with our own fiber and every year sales have increased,” Russell said. “It’s not really profitable at this point, but with sales increasing every year, it will eventually become profitable.”

Russell Jones said it’s not an endeavor jumped into on a whim; the family researched and had Kell take them around to multiple farms until they bought some Huacaya alpaca. Russell suggested that anyone who is interested in having alpaca visit many different farms before deciding that it’s the life for them, because it requires a love of farm animals.

“Getting into alpacas, it’s not a get rich quick thing, which was what a lot of people got into it for 10 years ago,” he said. “Now I feel it’s more for a doing it for the love of it thing. If you don’t like livestock, if you don’t like dealing with animals, it’s really not for you. If you like working with the animals, then it might be something you want to consider. But it’s still not cut out for everybody.”

How to have financial flexibility

How to have financial flexibility

New job? The right thing to do with your 401k

New job? The right thing to do with your 401k

Nancy Imphong, owner of Shadowberry Farm Alpacas, gives some of her Alpacas a snack on Wedneday afternoon.

Nancy Imphong, owner of Shadowberry Farm Alpacas, uses the harvested fur from her alpacas to make a wide variety of garments.